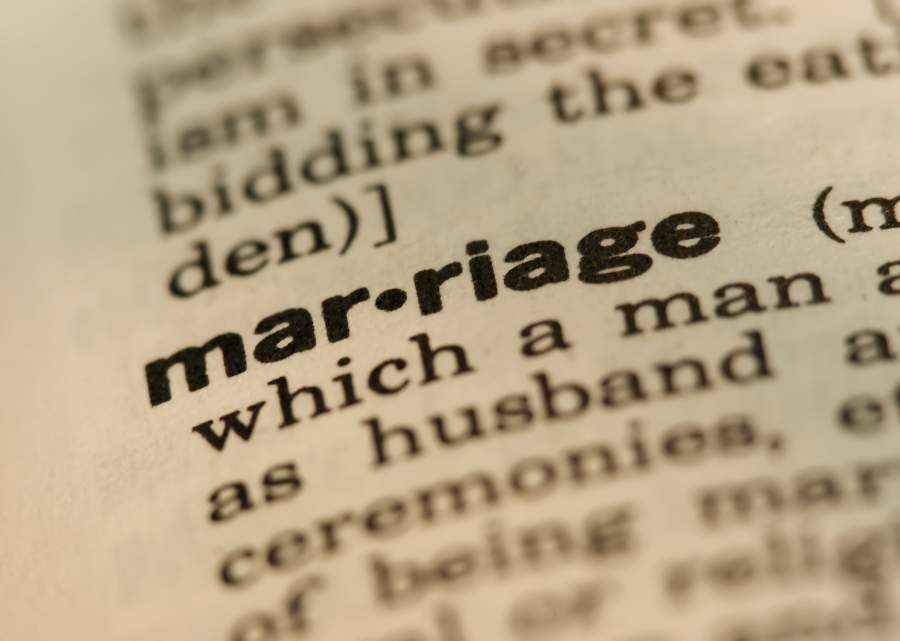 N.T. Wright is one of the most world’s foremost New Testament scholars, a sober-minded man not given to extreme rhetoric. Yet when it came to the question of redefining marriage, Wright did not hold back, explaining how dangerous it is to change the fundamental meaning of words:

When anybody — pressure groups, governments, civilizations — suddenly change the meaning of key words, you really should watch out. If you go to a German dictionary and just open at random, you may well see several German words which have a little square bracket saying ‘N.S.,’ meaning National Socialist or Nazi. The Nazis gave those words a certain meaning. In post-1917 Russia, there were whole categories of people who were called “former persons,” because by the Communist diktat they had ceased to be relevant for the state, and once you call them former persons it was extremely easy to ship them off somewhere and have them killed.

He continued, “It’s like a government voting that black should be white. Sorry, you can vote that if you like, you can pass it by a total majority, but it isn’t actually going to change the reality.”

That’s why I have often said that once you redefine marriage, you render it meaningless.

It would be like saying a couple can now consist of five people, or a pair can refer to one item, or a tricycle can have two wheels.

Redefining those terms doesn’t change reality, and when it comes to marriage, if you don’t have the two essential components, namely a husband and a wife, you don’t have marriage.

As I pointed out last year in an article entitled, “I Now Pronounce You Spouse and Spouse,” as England began to move towards redefining marriage, the Daily Telegraph reported that, “The word ‘husband’ will in future be applied to women and the word ‘wife’ will refer to men, the Government has decided.”

According to John Bingham, “Civil servants have overruled the Oxford English Dictionary and hundreds years of common usage effectively abolishing the traditional meaning of the words for spouses.”

So, a man could be a wife if married to another man (or not), while a woman could be a husband if married to another woman (or not), all of which begs the question: Why use words at all if they have utterly lost their meaning? It’s like saying that up is down (or up) and down is up (or down), while north is south (or north) and south is north (or south).

In the same article, I cited the Huffington Post, which reported that “California’s same-sex couples may now be pronounced spouse and spouse after Gov. Jerry Brown (D) signed a bill [last] Monday eliminating outdated ‘husband and wife’ references from state laws.”

Not surprisingly, according to California bill AB 1951, birth certificates will have three options: “mother,” “father,” or simply “parent,” meaning that, in the case of two lesbians, one could be designated “father,” while in the case of two gay men, one could be designated “mother.” The bill would also allow for three parents to be listed on the birth certificate, since there’s obviously a missing third party in the event of two men or two women “having” a baby.

This means that we’ve come to a place of semantic insanity, a place where you can have male wives, female husbands, male mothers, and female fathers.

Do people really think you can just turn the world upside down without having any adverse effects?

In keeping with this social madness, the state of Florida recently changed its marriage certificates, removing the terms “bride” and “groom” and replacing them with “spouse.”

This goes hand in hand with other international trends. As I pointed out in 2011, “In Ontario, Canada, as a result of the legalization of same-sex marriage, all references to terms like husband, wife and widow were removed from the law books in 2005. In Spain, birth certificates were changed from ‘Father’ and ‘Mother’ to ‘Progenitor A’ and ‘Progenitor B.’”

That’s why principle No. 4 in my new book is: Refuse to Redefine Marriage; since, to repeat, once you redefine marriage, you render it meaningless.

The Supreme Court can gives its ruling; laws can be passed; public opinion can shift and turn, but that doesn’t mean we have to affirm it, participate in it or, God forbid, celebrate it.

But all is not lost. True marriage, natural marriage, marriage the way God intended it from the beginning (see Jesus’ words in Matthew 19:4-6) will endure, while radically redefined marriage will undo itself.

I was reminded of this as I watched some baby dedications at a church service on Sunday, with the proud moms and dads holding their precious little ones in their arms: There’s no substitute for marriage and family the way God set it up, regardless of what Florida or California or England or Spain or Canada might say.