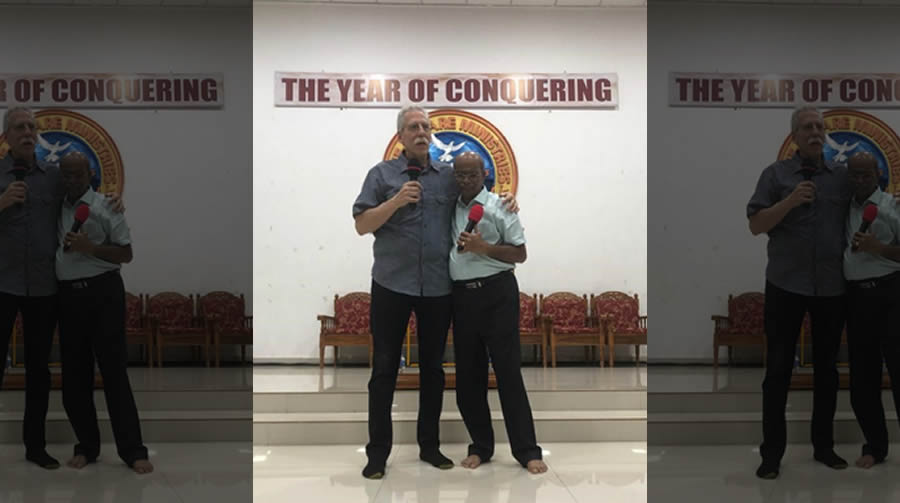 I recently returned from my 27th trip to India, and as always, I was moved by the devotion of the believers there to the gospel. They know that serving Jesus might cost them their lives. When they are baptized — not meaning all Indian believers, but those baptized under the ministry I support there — they pledge to follow Jesus to their last breath, to their last drop of blood. They know that persecution and hardship and suffering go hand in hand with the gospel. How different this is from the American version of the gospel!

On this last trip to India, speaking privately to pastors and church planters, the text I preached from the opening night was 2 Timothy 2:3. There, Paul exhorts Timothy to endure hardship as a good soldier of Messiah Jesus. I reminded them that no one said following Jesus would be easy. That a soldier is under the command of his officers and doesn’t live for himself. That we might die in the field of battle. It was anything but an upbeat, “positive” message. It was sobering and it was serious.

Blessed are the Persecuted

And how did it impact the hearers?

I doubt the message would receive a similar response in many of our American Christian circles, where we have substituted an ear-tickling “gospel” that bypasses the cross and majors on making us feel good. That is not the gospel of Jesus.

Some years earlier, during another season of persecution in India, when pastors knew they could be facing martyrdom, especially in the state of Orissa, I preached from Matthew 5:10-12.

There, Jesus says to His disciples, “Blessed are those who are persecuted for righteousness’ sake, for theirs is the kingdom of heaven. Blessed are you when others revile you and persecute you and utter all kinds of evil against you falsely on my account. Rejoice and be glad, for your reward is great in heaven, for so they persecuted the prophets who were before you.”

This is similar to the attitude of the apostles in the Book of Acts after being flogged for their faith by their Jewish leadership: “Then they left the presence of the council, rejoicing that they were counted worthy to suffer dishonor for the name.” (Acts 5:41)

A Battleground, Not a Playground

More than 50 years ago, A. W. Tozer exposed the superficial attitude of so many contemporary, American Christians, noting, “The idea that this world is a playground instead of a battleground has now been accepted in practice by the vast majority of fundamentalist Christians. They might hedge around the question if they were asked bluntly to declare their position, but their conduct gives them away. They are facing both ways, enjoying Christ and the world, gleefully telling everyone that accepting Jesus does not require them to give up their fun — Christianity is just the jolliest thing imaginable. The ‘worship’ growing out of such a view of life is as far off center as the view itself — a sort of sanctified nightclub without the champagne and the dressed-up drunks.”

As I have often asked myself when reading vintage Tozer, “What would he say today?”

During that same trip to India where I preached from Matthew 5:10-12, I shared the story of Christian missionaries in South Africa at the turn of the 20th century. Their outside support had been cut off, and if they decided to remain in South Africa, living in difficult, outlying places, they or their families faced likely death.

They gathered together, 120 men in all, and met with their leader, John G. Lake, who had called them in from all over the nation. After meeting and praying for three days, they asked Lake to leave the room for a few minutes. When he returned, they had prepared the room to receive Holy Communion together, and they made a pledge to Lake. They were going back to their mission, no matter what. They only asked that if any of them died, Lake would bury them.

With great pain Lake later recounted how he buried 12 of the finest men and 16 of the finest women and children he ever knew during that final year.

After I shared this story with the pastors in India, there was a scurrying under the tent where we were meeting. They too wanted to take communion together. They too wanted to do what these missionaries did, partaking of the symbols of the body and blood of Jesus and pledging their bodies and their blood for the gospel in India. It was an incredibly moving scene, as they took part in communion with many tears. It was an unforgettable, sacred moment.

The next day, I spoke to my ministry school students who were there with me. They too were deeply moved after we had the privilege of (literally) washing the feet of these precious servants of God. The students said to me, “Dr. Brown! We washed the feet of people who will be martyred for Jesus!”

I said to them, “That’s why I asked you to come on this trip. Forget about the version of the gospel you see in America. This is the real thing.”

To be sure, I’m thankful for the many fine pastors and believers in America, and I personally know many who are totally serious about the gospel, right here in our land. They too want to follow Jesus by life or by death.

But they are in the great minority. The great majority need a massive (and rude) awakening.

May we have a fresh baptism of spiritual reality in our nation. The gospel is hardly a matter of fun and games.