Google ‘Fairness’? It’s Really a Way to Try to Defeat Trump in 2020 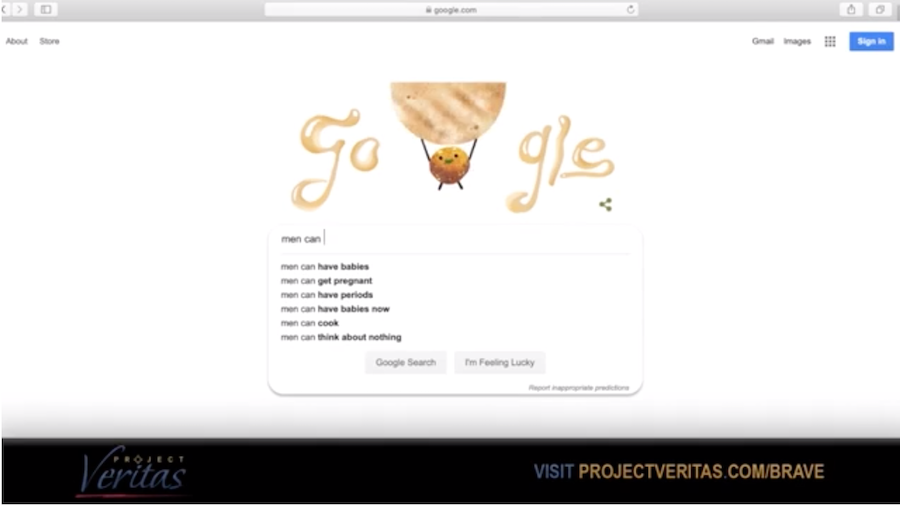 Google plans to stop President Trump from winning reelection. So says a Google employee who didn’t know she was speaking to Project Veritas. They caught her talking about the company’s plans. They also interviewed an anonymous Google insider on how Google manipulates searches to push a radical social justice agenda on people.

The employee they caught is Jen Gennai, head of Responsible Innovation at Google Global Affairs. She says Google’s AI “Machine Learning Fairness” program is something Trump supporters would not “agree with.” “The same people who voted for the current president do not agree with our definition of fairness,” she explains. She has a narrow definition of fairness. “My definition of fairness and bias specifically talks about historically marginalized communities. And that’s who I care about.”

She doesn’t think much of Elizabeth Warren’s plan to break up Google — even though she says she “loves” Warren. Why? Because smaller companies won’t have the resources that Google does to prevent Trump from winning in 2020. Google has been working diligently to “prevent” the results of the 2016 election from repeating in 2020. This includes training its algorithms. Google can set what it thinks is “fair” in search results.

Project Veritas leader James O’Keefe also interviewed an anonymous Google insider who explained Google’s political bias. “What they’re really saying about fairness,” he says, “is that they have to manipulate their search results so it gives them the political agenda that they want. And so they have to re-bias their algorithms.” He went on, “They’re not an objective source of information. … They are a highly biased political machine that is bent on never letting someone like Donald Trump come to power again.”

He said Google changed its approach after the 2016 election. It used to promote various viewpoints. But after Trump was elected, the company decided it needed to actively stop hate and racism that the company assumed had helped elect Trump.

“Fairness is a dog whistle,” the insider said. “It does not mean what you think that it means. You have to employ doublethink in order to understand what they’re really saying. What they’re really saying is they have to manipulate their search results so it gives them the political agenda they want. So they have to re-bias their algorithms so they can get their agenda across. You actually think of fairness as unfair.”

This changing of the algorithms is known as “ML Fairness,” and is used to combat “algorithmic unfairness.” As an example of Google’s bias, O’Keefe typed in “Men can” in a Google search box. Google’s top suggestions to complete it: “have babies,” “get pregnant,” “have periods” and “have babies now.” The insider told O’Keefe that is not what people are searching for; that is what Google has selected to represent “the truth.” It’s part of the social justice narrative. In fact, if you follow through and ask Google if men can get pregnant, the answer is yes. Google engineer Gaurav Gite was caught on video explaining how Google manipulates “algorithmic unfairness.” Even though there are fewer female CEOs than male CEOs, he says, Google will portray them in equal numbers in an image search for CEOs. This example is given in Google’s documentation, which an insider released to Project Veritas. Another document says “it may be desirable to consider how we might help society reach a more and equitable state via product intervention.” The company says it wants to form “a single point of truth” across the platform.

In another leaked internal document, Google admits that “people (like us) are programmed.” Instead of merely being a search provider, Google is telling people what to think. The insider told O’Keefe to type in “Hillary Clinton’s emails” Zero search suggestions showed up. Google does not want people interested in that topic. According to the insider, it’s a conspiracy theory. But if you look up the topic under Google trends, it is clear it is a popular topic. In contrast, if you search “Trump’s emails,” several search suggestions pop up. The insider said that Google’s YouTube “targets right wing news commentators.” He referenced the demonetizing of prominent YouTube conservatives like Steven Crowder. “What’s scary is Google is deciding what’s important and what’s not important,” he said. It reminds him of the book 1984. He thinks it’s fascism.

Gennai says Google doesn’t show up to respond to Congressional inquiries because the company knows it’s not going to change. She boasted, “They can pressure us but we’re not changing.”

This is just more of the same censorship of conservatives we’ve been seeing by big tech. The companies get away with it because they claim to be merely platforms, not news providers. That exempts them from liability over their content under Section 230 of the Communications Decency Act. But they are not merely platforms. They are actively picking and choosing winners and losers. Until the law treats them as news providers, they will continue to get away with this censorship.

The video has been removed from YouTube and Vimeo, but can still be found at Bitchute.