Good for Congressman-Elect Madison Cawthorn: He Defends Sharing His Faith 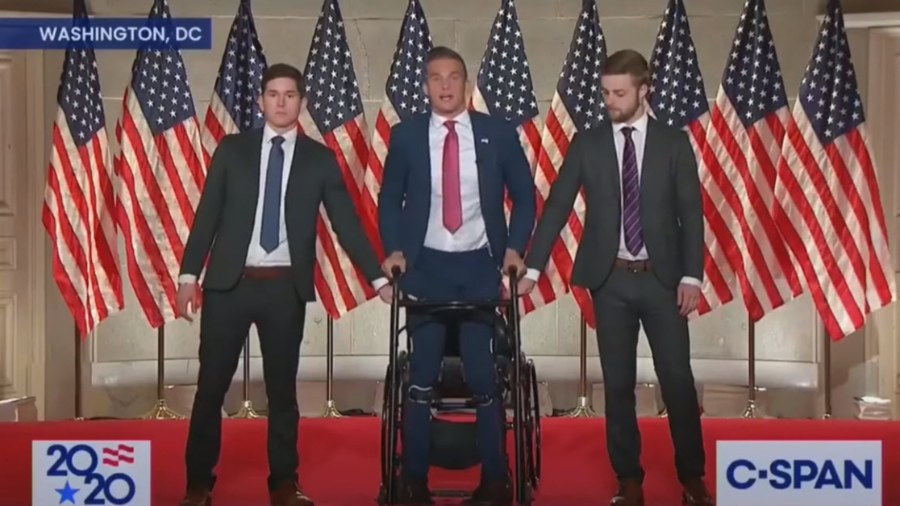 It appears that the Daily Beast was the first to report it, news that was absolutely shocking, even terrifying. Yes, “Madison Cawthorn, the North Carolina Republican who will become the youngest member of Congress in history, has admitted he tried to convert Jews and Muslims to Christianity.” How could such a thing happen in the 21st century?

How could a self-righteous, religious fanatic make it into the hallowed halls of the House?

As I tweeted in response to the shocking news, “Oh, the horror! A newly elected House Rep., Madison Cawthorn, is a Christian who — get this — actually practiced his faith and tried — gasp!! — to win Jews and Muslims to Jesus. Time to panic! Sound the alarm! This dangerous man is now in Congress! (Seriously, good for him!)”

It turns out that in a November 16 interview with the Jewish Insider, Cawthorn spoke of his devout Christian faith, explaining that he had also read the Quran in case he ever met a Muslim who was curious about Christianity. And, he was thrilled to share, he had actually seen some Muslims become Christians.

Precisely. Sharing the Christian faith with non-Christians, in a loving, non-coercive way, is part of what Christians do. For followers of Jesus, this should be as natural as breathing. It is part and parcel of who we are and part of the mandate that He left us. In the oft-quoted words of Jesus, we are to “go into all the world and preach the gospel to all creation” (Mark 16:15).

So, for doing what Christians have done for 2,000 years — sharing their faith — Cawthorn is an anti-Semite and an extremist, and “the entire GOP” should condemn his heinous act.

Coincidentally, about the same time the Jewish Insider interview was being released, I was writing an article on the gospel being our first and greatest priority. The article ended with several powerful quotes, including this one from C. H. Mackintosh (1820-1896): “No Christian is in a right condition, if he is not seeking in some way to bring souls to Christ.”

Put another way, committed Christians share their faith the way committed Jews observe the Torah and committed Muslims follow the Quran. These are foundational elements of each one’s respective faith.

What about sharing the gospel with Jews? The Jewish Insider asked him that very question:

“I have,” he said with a laugh. “I have, unsuccessfully. I have switched a lot of, uh, you know, I guess, culturally Jewish people. But being a practicing Jew, like, people who are religious about it, they are very difficult. I’ve had a hard time connecting with them in that way.”

That makes perfect sense. It is harder to change the views of someone who is also deeply committed to their faith.

This, however, was too much for MSNBC’s Chris Hayes. He said that “this is a really anti-Semitic thing to say. It’s like the original anti-Semitic thing to say and doesn’t rely on any codes or tropes. And the entire GOP should condemn it. But of course they won’t, and I’m willing to bet it gets 1/20th of the coverage of Omar’s tweet? And this speaks to something pretty profound about how the two parties are viewed and whose ‘extremism’ gets attention.”

So, for doing what Christians have done for 2,000 years — sharing their faith — Cawthorn is an anti-Semite and an extremist, and “the entire GOP” should condemn his heinous act.

In reality, there’s nothing anti-Semitic in Cawthorn’s words and attitudes. As noted by Tablet Magazine’s Yair Rosenberg, “Twice as many Jews think you can be Jewish and *not believe in God* than think you can be Jewish and believe Jesus was the messiah. It’s not anti-Semitic to say this out loud! It just means you’ve talked to some Jews and noticed what most of us believe.”

Bingo. Rosenberg hit the nail on the head. The vast majority of Jews reject faith in Jesus, in particular, religious Jews.

Ironically, Jesus Himself was Jewish.

His name was Yeshua, and He was called “Christ” because that was the Greek way of saying “Messiah.”

He was a rabbi, not a reverend, His mother’s name was Miriam, and His first followers were Jewish men with names like Shimon and Yochanan and Yaakov and Yehudah.

The Jesus movement actually started out as exclusively Jewish, with the big question arising: Can you be a Gentile and believe in Jesus, or do you have to become a Jew first? (See Acts 15.)

That’s why, every writer of the New Testament, with the possible exception of one, was Jewish. And that’s why Paul wrote, “For I am not ashamed of the gospel, because it is the power of God that brings salvation to everyone who believes: first to the Jew, then to the Gentile” (Romans 1:16).

Cawthorn, who seems to have a genuine love and respect for the Jewish people, was simply living out his faith, sharing the gospel indiscriminately with others. That included atheists, Muslims, Jews, and others. To repeat: that’s what Christians do.

Thankfully, rather than cower to this anti-religious hostility, Cawthorn has pushed back, tweeting, “I am being attacked because I share my faith with others? Is the left fully anti religious freedom now?

“This is dangerous for America!”

As a Jewish follower of Jesus myself, I am grateful beyond words that Christians shared their faith with me in 1971.

And I am not alone. Other Jewish believers in Jesus, like ACLJ attorney Jay Sekulow or conservative commentator and novelist Andrew Klavan, are also glad that someone shared their faith with them.

In a free country like ours, that is what we get to do. Talk or not talk. Accept the gospel or reject it. Share our beliefs or keep them to ourselves.

It’s a free country, and this is an essential part of our freedom.

Personally, I hope that Cawthorn will have some success sharing his faith in Congress. God knows that plenty of Congressmen need Jesus, too.