Global Elites Would Crush Us in the Great Reset 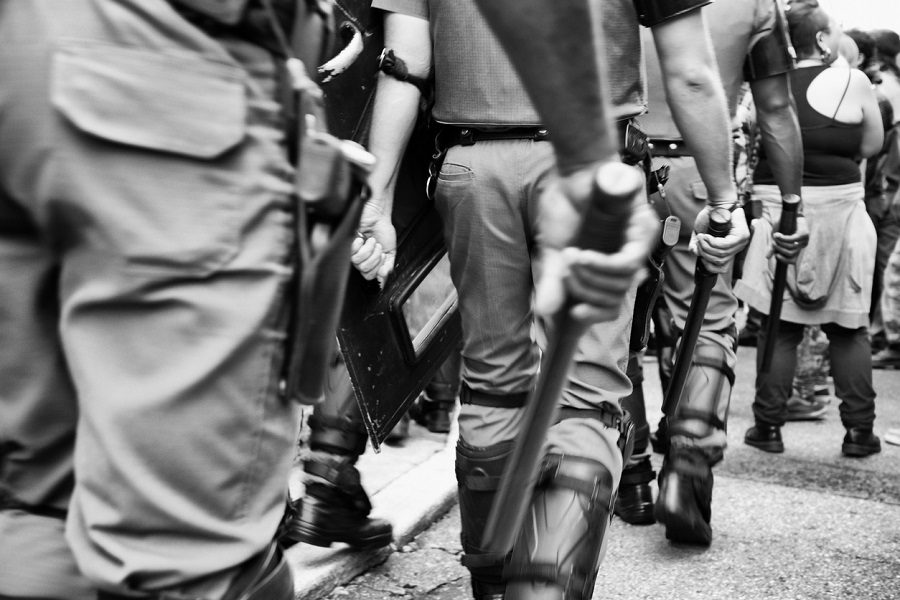 On Friday I helped set up the dire warning from Catholic Archbishop Carlo Maria Vigano, which ran at The Stream. Parts of it sent a cold, unearthly chill running through my bones. If you haven’t read it you must. As you do, remember that it’s not some prophecy by a solitary mystic prone to visions. Its author is a professional diplomat, who represented the Catholic Church in Washington, D.C., for years. A man of measured words.

If you knew me, you’d already realize that I’m the least apocalyptic believer on earth. I’m constitutionally skeptical of miracles, voices and signs. I fully expect that the world will go on sliding inexorably into mediocrity for millennia still to come. (That might come from growing up in New York City during the 70s.)

A few years back I wrote a funny essay skewering people who hunger for wonders and seem to crave “the End,” accusing them of “milking” the “apocalypse cow.” I hinted that it spoke of a shaky faith, desperate for proofs.

With that in mind, I’m frankly worried. I fear that the most powerful people, groups, and institutions in the West have passed a tipping point. I think they have sold their souls, and frankly lost their minds. The virus panic proved for some enough to snap their last attachment to reality. Others see it cynically, as a pretext for finally acting on cold, inhuman ideas they have toyed with for decades.

I won’t rely on coded messages from putative “insider” sources. I’m not trusting rumors, hints, or dubious secrets. The Great Reset that Archbishop Vigano warns of in his letter is a real plan. One backed by thousands of power-hungry millionaires and billionaires. International power centers like the World Economic Forum have thrown their weight behind it. Its backers are running ads preparing people to accept it. Like this one. 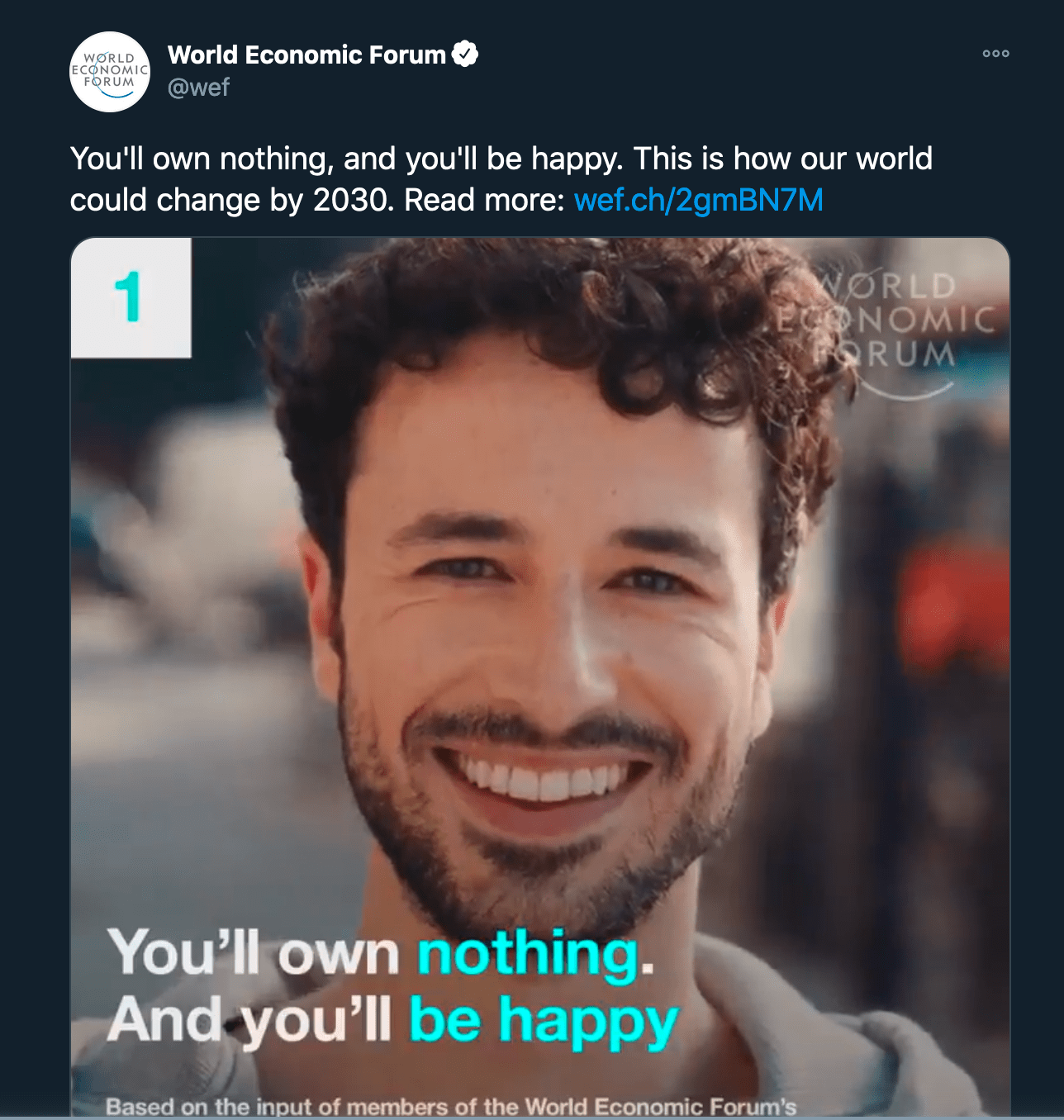 Propaganda posters like that one, which promise to strip us of the most basic human right — that is, property — should get your blood boiling. If they don’t, you might already be dead. At least dead inside, hollowed out, beaten down, so scared of a seasonal virus and attached to this earthly life that you’re already trained as a slave. It has happened to entire once-free Western countries, like New Zealand. That country just re-elected in a landslide the rabid leftist leader who turned the whole place into a medical prison camp, and now promises to enact euthanasia laws.

The mainstream center-right magazine, National Review, has soberly reported on what this Great Reset entails. There’s no need to exaggerate anything at this point. The World Economic Forum, and the governments and billion-dollar corporations that follow its lead, have nothing modest in mind. Using the Chinese virus as a pretext — climate change didn’t quite do it — they propose nothing less than a wholesale revamping of human life on earth:

The world must act jointly and swiftly to revamp all aspects of our societies and economies, from education to social contracts and working conditions. Every country, from the United States to China, must participate, and every industry, from oil and gas to tech, must be transformed. In short, we need a “Great Reset” of capitalism.

As Andrew Stuttaford observes, the WEF openly admits that it has been inspired to more ambitious power grabs by our timid, dutiful obedience in the face of the virus lockdown. In the WEF’s own words:

One silver lining of the pandemic is that it has shown how quickly we can make radical changes to our lifestyles. Almost instantly, the crisis forced businesses and individuals to abandon practices long claimed to be essential, from frequent air travel to working in an office.

Have you got that? The billionaires and social engineers linked to the World Economic Forum look at the millions of lost jobs, wrecked lives, postponed cancer screenings, shuttered stores, and lost opportunities resulting from the futile virus lockdowns. And they see an opportunity. They see us as whipped dogs, cowering, ready to be put through a whole new round of aversion training. What other “radical changes to our lifestyles” do these people have in mind?

Will our churches, hastily shuttered, ever reopen? Will state governors continue to wield god-like power over the movement and livelihoods of their citizens — even as they rain death down on patients in nursing homes? Archbishop Vigano warns of specific measures he sees coming:

[T]he renunciation of private property and adherence to a program of vaccination against Covid-19 and Covid-21 promoted by Bill Gates with the collaboration of the main pharmaceutical groups. Beyond the enormous economic interests that motivate the promoters of the Great Reset, the imposition of the vaccination will be accompanied by the requirement of a health passport and a digital ID, with the consequent contact tracing of the population of the entire world. Those who do not accept these measures will be confined in detention camps or placed under house arrest, and all their assets will be confiscated.

Never forget @GovTimWalz allowed Minneapolis’s 3rd Precinct to be torched by rioters. But months later he made sure to prevent this man from attending a Trump rally. pic.twitter.com/aaFBuLKYXB

Just so, local governments once let Nazi brown shirts terrorize their opponents, only sending the cops to arrest their victims if they resisted. The “antifascists” learned the lessons of history, all right. They studied the Nazi playbook, and adopted it.

And if you speak out? If resistance to unconstitutional measures starts to catch on? The experts will report on a dangerous “spike in COVID cases,” and count on public panic to silence the hecklers.

A new and ugly ideology and method of government faces us. Its name is Anarcho-Tyranny. To punish its enemies, placate its friends, and pillage vast piles of wealth, this system lets rioters torch and loot entire cities. Police stand down, as if they didn’t even exist, as if the city had no organized government.

But if private citizens like Kyle Rittenhouse use force to defend themselves or their neighbors? Then the whole force of government slams down on them like a jackboot. They’ll face murder charges for self-defense. Or get badgered and persecuted into suicide, like Jake Gardner. The police exist not to maintain order and protect individual rights, but to perpetuate disorder and keep the people helpless. To keep the gangs of looters and thugs in the driver’s seat.

As you read this, the stores of our nation’s capital are all getting boarded up, in expectation of riots unleashed on it if the election’s results don’t please the people who favor the Global Reset. If we vote wrong, we will be punished, and they’ll use our own police to hold us down while the rioters rape our cities.

Those are the stakes on Tuesday, my friends, and for the foreseeable future. May the Good Lord help us all.