Glitzy Light Shows are Fine, but Jesus is Still More Than Enough 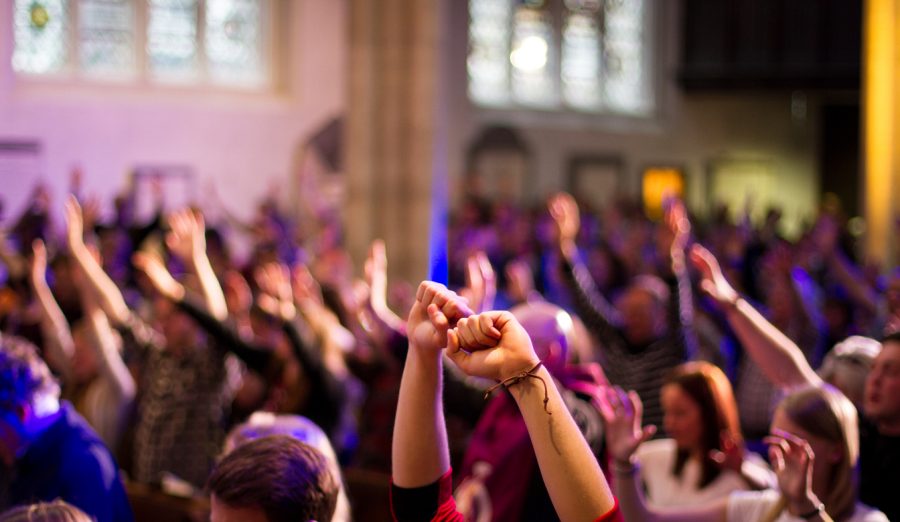 I have no problem with slick-looking worship bands and glitzy light shows. I have no problem with churches using the latest technology to enhance the Sunday sermons. Let’s use what we can to get our message out and let’s do things with excellence for the Lord. But I do have a problem with depending on these things. Have we forgotten that Jesus is more than enough?

I came to faith in 1971 as a 16-year-old, Jewish, hippie rock drummer. It was in a small, Italian Pentecostal church in Queens, New York where the worship team consisted of the pastor’s wife, who played the piano. (Sometimes, she would be accompanied by the pastor’s brother, who played the guitar.)

There was hardly any amplification. Nothing was slick or sophisticated. And most of the songs we sang were written decades, if not centuries earlier.

Yet the joy I experienced there, the presence of God I met with there, the life-changing power I encountered there were so great that almost overnight, I was radically changed.

You might say, “But things were very different back then. Today, if we don’t have the best musicians and the tightest bands and the best technology and the coolest pastor, no one will show up.”

I beg to differ.

Of course, things were radically different in 1971. We had no cell phones or personal computers or tablets or social media. We were not constantly connected online. There was no such thing as virtual reality. The list goes on and on.

But in other ways, things were not so different, especially in the world in which I lived. I’m talking about the world of rock and roll and drugs and rebellion.

Yet when I encountered the gospel of Jesus my world was turned upside down (really, right-side up).

Yet when I encountered the gospel of Jesus my world was turned upside down (really, right-side up). When I met the Lord, everything changed. And all this happened even though this little church was totally foreign to me culturally.

Rock concerts were loud. Deafeningly loud. In fact, to test the volume at these concerts, I would scream at the top of my lungs while the band played. If I could hear my voice at all, they weren’t loud enough.

And we had light shows back then too. The Fillmore East, where I saw concerts on a regular basis, featured the Joshua Light Show. The screen would pulsate with colors and images as the band played, making for a real sensory experience.

Added to this was the smell — the building smelled like pot and hash — and the fact that many (or, most) of us at the concert were stoned. Talk about an experience.

What a contrast with the church where I was born again!

First, as a Jew, church itself was totally foreign to me.

Then there was the pastor, who wore a suit and tie, rather than clerical robes like a rabbi or priest. That was odd too.

And then there was the music. I went from Jimi Hendrix performing “Purple Haze” to the pastor’s wife playing “Make Me a Blessing.” From Led Zeppelin doing “Dazed and Confused” to the little congregation singing, “Power in the Blood.”

Yet it was there, in that culturally foreign setting, that I experienced such an indescribable joy that I became aware of how deeply God loved me and how ugly my sin was. And so, on December 17, 1971, after months of interaction with my friends and weeks of attending church services, I said to the Lord, “I will never put a needle in my arm again.”

It was my point of surrender to God, my acknowledgment that Jesus was Lord, the living out of my new faith. And by His grace, I have never been the same.

Again, I have no problem with doing things with excellence, and I personally enjoy fine musicianship in church. To me, having a tight worship band is no different than having a good pipe organist or a well-rehearsed choir. This is just the latest, contemporary version.

I speak in megachurches around the world, so I’m used to all this and quite at home with it. Better to have good musicians than bad musicians. Better to have a good sound system than a bad one. Better to coordinate your outfits than to look like slobs.

But let’s never forget that it’s not the nice outfit or the polished solo or the multi-media presentation that saves the lost. It’s the power of the gospel. It’s the life of the Spirit. It’s the message of the cross and the resurrection. That’s where our concentration must be.

Jesus Is Still More Than Enough

And when God starts moving — when the sick are miraculously healed; when addicts are miraculously delivered; when the lost are miraculously saved — that the crowds will come. They will literally travel from around the world to get to your meetings, even if your worship leader is a blind banjo player who can barely sing on key.

If the power of God is there and Jesus is being exalted, the people will come. I’ve seen it with my own eyes, and it’s the scriptural pattern as well.

So, by all means, do things with excellence and speak a language that the culture understands. Just remember to major on the majors. Jesus is still more than enough.