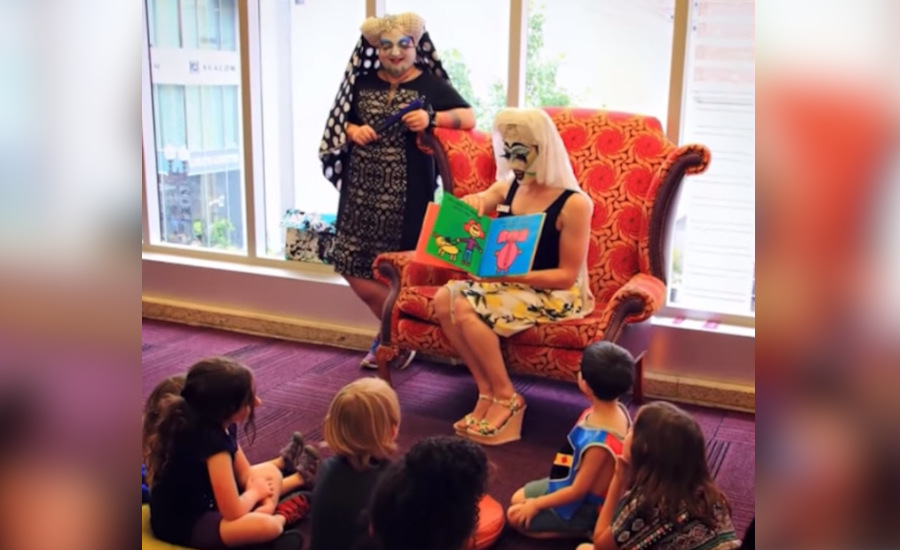 There are some things so wrong that we cannot allow ourselves to get used to them. We must always be outraged over them. Always grieved over them. We can never accept them as the new status quo. The drag queen assault on our children is one of those things.

I’m talking about the celebration of little children in drag.

I’m talking about drag queens dancing for our children (and reading stories to them).

This is unacceptable. This is perverse. This is outrageous.

Coming After Our Children

It was bad enough when this stuff happened at gay pride parades.

It was even worse when it started to happen in our community libraries.

Yes, you ought to be outraged.

Now it has even entered houses of worship. As a June 24 headline announced, “Drag Queen Reads During Worship Service as Cincinnati Church Celebrates Pride Month.”

As reported, “Following the song ‘God Welcomes All’ by the church choir, [Dad] Davidson [who was dressed up as ‘Spark Leigh’] walked up on stage and read the book Pride: The Story of Harvey Milk and the Rainbow Flag to the audience. The story was intended for children, some of whom sat at Davidson’s feet during the reading.”

Yes, you ought to be outraged.

It wasn’t that long ago that LGBT activists were telling us that drag queens were an entirely separate category, not to be confused with transgenders.

Drag queens were flamboyant gay men who enjoyed dressing up in drag. They were hardly representative of the gay community at large. They were marginal, circus-like characters, on the fringe of the culture as opposed to representing the mainstream.

Now, here they are, front and center, and they are coming after a very specific target audience: your children.

I’ll stop when they stop.

You might ask, “Why do you have to keep bringing these subjects up? Why talk about them so much?”

I can answer that in the words of one of my activist friends: “I’ll stop when they stop.”

Not on my watch, if I can help it.

You say to me, “But you are a minister of the gospel. You should have compassion on this drag queen and want to reach out to him.”

I do! I care about him as a fellow-human being and want to see him find wholeness with God and with people. Absolutely.

And I want to keep him from “grooming” the next generation to tolerate, let alone celebrate, men dressing as women.

That’s also consistent with being a follower of Jesus and a minister of the gospel.

Enough of These Headlines

Sorry, but I’ve had it with headlines like this: “Nine-year-old drag queen is a hit on Instragram.”

As the story explains, “Meet Kween Kee Kee – the ‘baby drag queen’ who is teaching his own teachers a lesson about gender identities.

“Keegan, 9, lives with his parents and brother in a Christian suburb just outside Austin, Texas. He plays football and video games, and also likes to dress in drag. He usually goes by the pronouns he/his, but his mother Megan describes him as ‘gender creative.’”

Another article reports, “the dance music is thumping, the audience is giddy and 10-year-old drag artist Queen Lactatia is sashaying up and down a makeshift catwalk in a shimmering metallic dress. The enthusiastic crowd hoots in approval as the diminutive style phenom weaves between tables at the all-ages brunch event, where the Montreal grade-schooler is followed by three more big-haired pre-teen performers, each in varying degrees of glitter, eyelash extensions and rainbow-hued attire.”

Refuse to Get Used to Perversion

You better believe we should be outraged over reports like this. Activists have gone too far when they start messing with our children. (And how terribly misguided are the parents who approve of such stuff.)

I will not get used to these perversions. I will not sit back idly when our children are being used and abused.

I’ve had it with pictures like this (viewer discretion advised), where these “drag kids” are being exploited.

That is why I’m going to stay outraged. I will not get used to these perversions. I will not sit back idly when our children are being used and abused.

And on a recent TED talk, the speaker closed with, “Talk to a kid about sexuality. Teach them about consent. Tell them is it OK for boys to wear dresses. . . . Let’s spread radical queer joy.”

So, let the outrage continue, my friend. And let that outrage turn to prayer, compassion, and courage.

This is happening on our watch.