The Gay Lobby Has Created Its Own Worst Nightmare: Part III of Our Interview with Robert Oscar Lopez 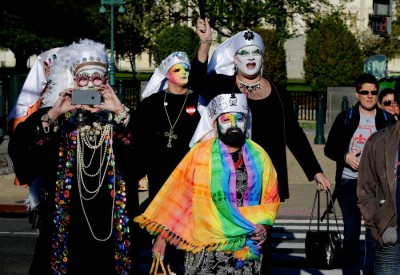 Professor Lopez talked to The Stream about his new book, co-edited with Rivka Edelman, Jephthah’s Daughters: Innocent Casualties in the War for Family “Equality.” The first two parts of our interview can be read here and here.

The Stream: There’s a strong distinction in your book between gay people and the gay lobby. How did gay marriage come about if, as you argue, it’s something most gay people weren’t calling for?

Robert Oscar Lopez: Gay marriage sprouted because people in the leadership got ahead of themselves. The rhetoric of gay marriage became particularly valuable because it combined the allure of conservatism and the allure of progressivism — you had the snow-white image of suburban normalcy (complete with clean and obedient children) going along with rich gays saying they are “just like you” (with “you” defined as a middle-class, well-behaved suburban consumer); and you had the veneer of counterculturalism and iconoclasm with lots of gay people at rallies, waving flags, screaming at bigotry and holding provocative placards.

So this fusion of left-wing and right-wing façades became a great tool for marketing and propaganda, almost too profitable. For it got out of control. The average gay person, who isn’t necessarily rich and probably won’t get into a lifelong sexually exclusive relationship complete with adoptive children, got forgotten in the whirlwind. Eventually such everyday people who have little to do with gay politics also got swept up and started to internalize the false consciousness of the gay marriage movement. It became hard for them to question gay marriage ideology as it accelerated. They didn’t have the room to stop and ask, “Why am I basing my dignity on an institution that was made for a very different community, one that has traditionally distrusted me?” They couldn’t ask, “Why are we spending all our resources on this instead of things that have a more direct and broad impact on gay people’s lives?”

The Stream: We’re seeing some people who support traditional marriage who are in favor of civil unions where they weren’t ten years ago, back when it was the slippery slope. Does it make sense to say, hey, we can afford legal protections and recognize civil unions?

Robert Oscar Lopez: I think it’s too late. The lobby is never going to settle for that. I still support it because I still think you need to have recognition of the relationships, but I am open to some of the other things people have said, like domestic beneficiaries, partnerships where two sisters could buy each other health insurance and things like that.

The people who support traditional marriage are growing and mutating. My prediction is that what the gay lobby has created is their own worst nightmare. They were so bad that the people who support traditional marriage had to become so smart and so razor sharp, and they had to master all these different things and reeducate themselves about world history and civil rights and international law and cultural anthropology. And they had to really absorb a lot of things that had traditionally been from the left, like the anti-colonialism and the anti-sexism.

When the smoke clears from this, I think the gay lobby is going to be overseeing a camp that has been dumbed down, that doesn’t really know very much. And their enemies are going to be people who are armed with all of the cultural intelligence — and that’s scary for me, because I don’t want the backlash to be worse than what we have now.

They’ve also given traditional marriage supporters the clear message that there’s no sense in compromising, and there’s no sense in reaching out. I wish there were, but we’ve tried it so many different ways to reach out and to be humane and to build bridges, and it doesn’t work.

Stay tuned for Part IV, the final installment of our series with Robert Oscar Lopez.