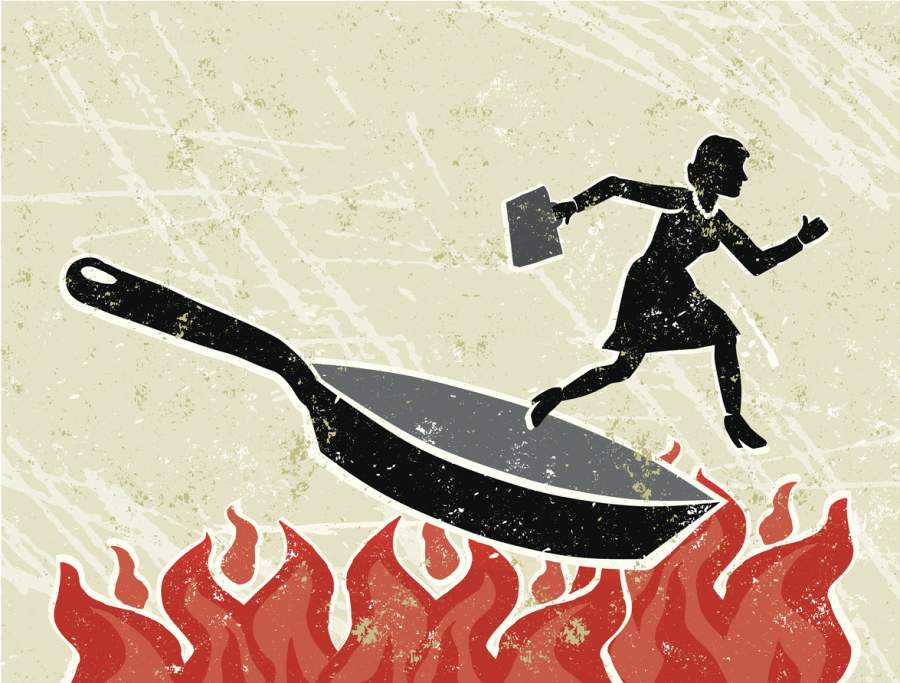 One great way to reason through things is to pose problem/solution scenarios and see how they work out. Living as we do in a fallen world, solving problems is … what we do. Most of the time. It’s crucial to take time out for contemplation, as Mary did with Jesus while sister Martha was still solving problems. But as St. Benedict taught, work can be joined to prayer, even made a form of prayer. It’s a good thing he thought that. None of the text we read from the ancient world would have survived, had monks not recopied them — not merely once, but over and over through centuries as the first parchments decayed.

So let’s start today with a problem and think through some solutions.

PROBLEM: The number three Republican in the House of Representatives is Liz Cheney. She has shown herself hostile to former President Trump, the Republican base, and the whole populist movement that saved the GOP from obscurity. She joined Mitch McConnell and Kevin McCarthy in falsely blaming Trump for the “Reichstag Riot” at the Capitol on January 6.

That event was officially (just ask CNN) the Worst Thing That Ever Happened in the History of America. It resulted in unarmed Trump supporter Ashli Babbitt getting gunned down by a cop. Dozens of pro-Trump political prisoners still languish in solitary confinement. Citizens took hundreds of illegal selfies. So of course the GOP establishment tried to leverage it to steal back the party from the people. That failed, so McConnell and McCarthy prudently dropped it. Liz Cheney wouldn’t. She saw her hobby horse winning the MSM Derby, and continued to ride it. She wouldn’t shut up about an event that most Americans have shrugged off — some of them as they walked past the storefronts which the Democrats’ favored terrorists burned out a few months before.

Kevin McCarthy valiantly tried to save Cheney from herself. To keep her in office, he swore to GOP congressmen that he couldn’t do his job without her. Take a moment to consider what he must think his real job is. Probably something like “Keeping those crazy rednecks and Bible thumpers under control, so my roommate ‘Republican’ pollster Frank Luntz can keep herding them over the cliff.”

How Do You Solve a Problem Like Liz Cheney?

Liz Cheney wouldn’t wear her mask, so her RINO horn kept showing. So it’s time to replace her, as McCarthy admitted recently on Fox News. (He even managed an unconvincing “hot mike” moment to sell the viewers that he was serious.) Break out those tattered elephant costumes from the congressional closet.

SOLUTION: Find someone (counting beans, it has to be a woman) who can keep the GOP contingent in Congress voting as the Chamber of Commerce tells them, with just enough Trumpian gestures to get her invited to Mar-a-Lago. That person is Rep. Elise Stefanik. In his can’t-miss daily broadcast, The War Room, on May 3, Steve Bannon asked his “posse” of viewers to do some digging on Stefanik to see if she’s in fact, as some claim, a “neocon.” That’s exactly what her voting record suggests.

Since she smelled Liz Cheney’s blood in the water, the ambitious Harvard Law grad has been feverishly seeking to take Cheney’s place. Donald Trump has actually endorsed her. (Take that with the same grain of salt we took Trump’s endorsement of John McCain and Mitt Romney. Trump often blindly obeys bad advice.)

Stuffing a RINO into an Elephant Costume

In just the past few months, Stefanik has been trying to burnish her populist, conservative credentials. That part hasn’t been easy. She didn’t have much to work with. Let’s cut to the squishy center-left of Stefanik’s voting record.

Yes on the Transgender Agenda

Stefanik was a leading supporter of the Transgender agenda, before she began to seriously covet Liz Cheney’s job. She was one of just eight Republicans to vote for the Equality Act in 2019 which would have ratified “President Obama’s 2014 executive order barring federal contractors from what it describes as ‘discrimination’ on the basis of ‘sexual orientation and gender identity’ in their private employment policies. In practice, it would have required federal contractors to grant biologically male employees who identify as women unfettered access to women’s lockers, showers, and bathrooms.” Stefanek voted with the ACLU, and against our religious freedom. Once the Supreme Court rendered the question moot, Stefanik announced a sudden conversion on this issue. Few were convinced.

She came into Congress as the protégé of Trump-hating, practically open borders Paul Ryan. You know, the guy who took over as head of Fox News shortly before the network turned on Trump, his voters, and their viewers.

When the obstructionism Ryan and McConnell inflicted on Trump’s agenda (no wall, but big corporate tax cuts) lost the GOP the House, Stefanik wrote Ryan a fan letter. It said, among other things, “One of the greatest honors of my professional life has been working with and learning from Paul Ryan. He is humble, honest, and thoughtful. He did not seek the job of Speaker, but he stepped up to serve during a challenging time in our Nation’s history. Paul has challenged us all to raise our gaze, and he is deeply respected on both sides of the aisle because of his principles and commitment to the American Idea.”

She Loves Voting with Liberal Democrats

Stefanik loves working across the aisle, with the most leftist Democrats in American history. She recently bragged on Twitter, “I am honored to be ranked in the top 3% most bipartisan Members of Congress by the Lugar Center.” You don’t see the Democrats picking Joe Manchin or Kyrsten Sinema for leadership. Consider why that might be. Maybe they actually … want to win?

Yes on Amnesty and Chain Migration, No on the Border Wall and Terrorist Ban

Some of Stefanik’s worst votes have been on immigration. NumbersUSA rated her “D-” on immigration in the most recent Congress. Her Wikipedia entry notes that “Stefanik opposed Trump’s 2017 executive order imposing a temporary ban on travel and immigration to the United States by nationals of seven Muslim-majority countries.” Those countries were chosen because they’re terrorist havens, but that doesn’t matter to Wikipedia, or Stefanik. More from the Wiki kids: “On March 26, 2019, Stefanik was one of fourteen Republicans to vote with all House Democrats to override President Trump’s veto of a measure unwinding the latter’s declaration of a national emergency at the southern border.”

Nine separate times in 2019 alone, Stefanik voted against funding a border wall. In December 2019 Stefanik voted to give amnesty to millions of illegal immigrants (HR 5038).

Stefanek has actually been a leader in trying to boost job-killing mass legal immigration. She co-sponsored the “Fairness for High-Skilled Immigrants Act.” It sought to double chain migration from countries such as India and China, and flood the already tight labor market for job-seeking US tech grads.

Do we really want a SOLUTION that’s actually worse than the PROBLEM? Surely some Republican congressman can step forward who actually backs what Republican voters want. Republicans are scheduled to vote next week on whether to jump from the frying-pan into the dumpster fire.

In secret, of course.