Franklin Graham: Chick-fil-A CEO Reassured Me the Company is Not Bowing to LGBTQ Demands 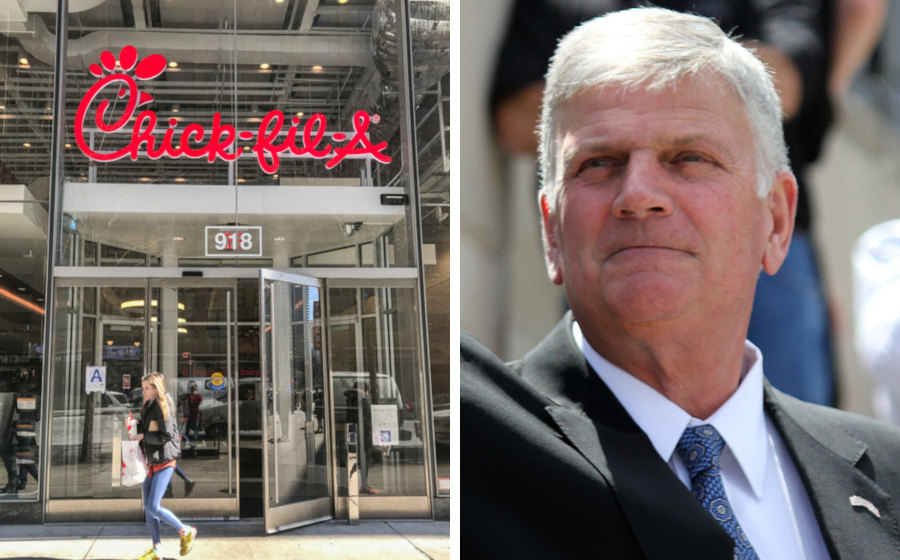 Chick-fil-A is under fire from many of its most loyal supporters after announcing a controversial new donation strategy viewed by many as caving to LGBTQ demands. Evangelist Franklin Graham posted to Facebook Thursday that he had “picked up the phone and called” Chick-fil-A CEO Dan Cathy.

“Dan was very clear that they have not bowed down to anyone’s demands, including the LGBTQ community,” Graham wrote. “They will continue to support whoever they want to support. They haven’t changed who they are or what they believe. Chick-fil-A remains committed to Christian values. Dan Cathy assured me that this isn’t going to change. I hope all those who jumped to the wrong conclusion about them read this.” He continued:

In my opinion, the gay movement wouldn’t ever be happy with Chick-fil-A unless they were open on Sunday, gave all of their charitable donations to LGBTQ organizations, and flew the rainbow flag over their stores! Their hatred for Chick-fil-A is rooted in founder Truett Cathy’s strong stand for biblical “traditional” values and his desire to honor God.

Many Chick-fil-A fans have expressed their disappointment with Chick-fil-A’s new donation plans. Former Governor of Arkansas and conservative commentator Mike Huckabee, who started the 2012 Chick-fil-A Appreciation Day in response to a national boycott, tweeted that Chick-fil-A had “betrayed loyal customers for $$.”

In Aug 2012, I coordinated a national @ChickfilA Appreciation Day after they were being bullied by militant hate groups. Millions showed up. Today, @ChickfilA betrayed loyal customers for $$. I regret believing they would stay true to convictions of founder Truett Cathey. Sad.

Chick-fil-A Switches Up Its Donation Strategy

What started the controversy? The company had faced protests this year over their biblical stance on marriage as it tried to expand to two airports and an English shopping center. Now they’re no longer donating to organizations criticized by LGBTQ activists. Christians see a link.

Certainly the media did. CNN published an article with the headline, “Chick-Fil-A Will No Longer Donate to Anti-LGBTQ Organizations.” The Christian Post’s headline reads, “Chick-fil-A Stops Giving to Salvation Army, FCA Amid LGBT Protests.” But is linking the defunding to LGBTQ pressure justified?

Chick-fil-A announced Monday they’re changing their donation priorities for 2020 to focus on “education, homelessness and hunger.” Two nonprofits, Junior Achievement USA and Covenant House International, along with local food banks at each new Chick-fil-A opening, are the only organizations listed in the Chick-fil-A Foundation’s $9 million 2020 donation plans.

“What’s wrong with that?” Graham asked in his post.

The Salvation Army and Fellowship of Christian Athletes are notably not a part of Chick-fil-A’s new donation strategy. Both Christian organizations require that its leaders abide by Christian sexual ethics and are criticized by LGBTQ activists. Not frequently noted is that these are not the only organizations that Chick-fil-A is cutting off. Their 2019 giving report shows over 80 organizations that received donations.

Chick-fil-A has avoided saying clearly whether their new strategy is in response to LGBTQ protests. However, a Biznow interview with Chick-fil-A President and COO Tim Tassopoulos indicates it may have been. “When there is a tension, we want to make sure we’re being clear. We think this is going to be helpful,” Tassopoulos said. “It’s just the right thing to do: to be clear, caring and supportive, and do it in the community.”

The Bisnow article also says that, “Future partners could include faith-based and non-faith-based charities, but the company said none of the organizations have anti-LGBT positions.” However, it’s unlikely Chick-fil-A would say they ever had partnerships with organizations that have “anti-LGBT” positions, so what does this statement actually mean?

Graham’s post indicates that he doesn’t think Chick-fil-A has caved, as the popular Twitter hashtag #ChickfilACaves indicates. But if that’s the case, their new donation strategy, following protests and trouble expanding in certain locations, couldn’t have come at a worse time.