France is Shaking, the Eiffel Tower is Burning, but There is a Way of Escape 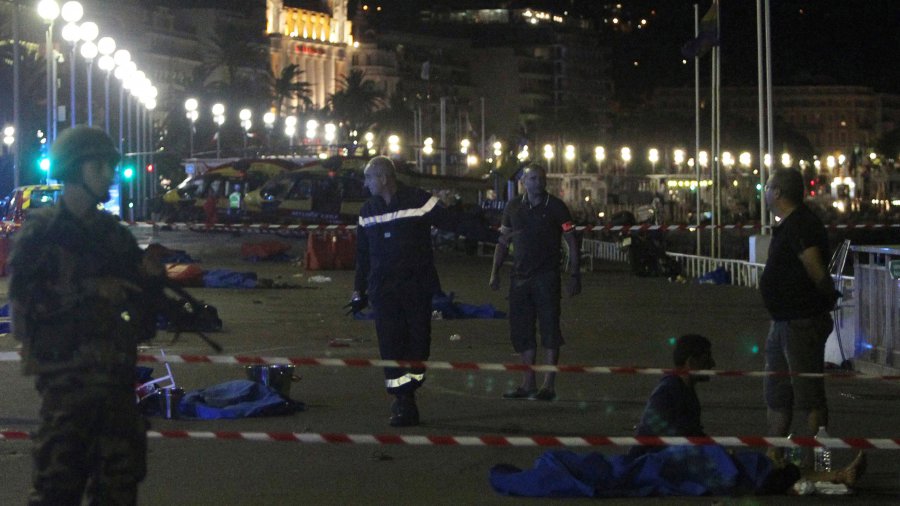 I write these words at 9:17 PM, EDT, July 14, as the shocking, tragic news from France has been flooding the internet the last few hours.

First, we heard of a tractor trailer plowing into a crowd celebrating Bastille Day, with reports of 30 killed. Then it was 50 killed. Then, more than 70.

Then the pictures of carnage began to appear — men, women and children, dead and dying in the streets.

Then we began to hear reports that there were also gunmen shooting, and we learned that explosives and firearms were found in that truck that had mowed people down over the course of one mile before the driver was killed by police.

Then we began to see videos of the Eiffel Tower burning, with some reports claiming that ISIS had ignited the flames.

It felt as if the nation of France was falling apart right before our eyes, attacked once again by militant Islam.

There were fears Paris had once again been targeted by terrorists tonight as smoke billowed from beneath the Eiffel Tower.

Videos from the capital showed plumes of thick black smoke rising from the base of the world famous landmark at the same time as the horror attack in Nice was unfolding that has so far killed more than 70 people.

The scenes sparked immediate fears that the city was once again under attack by Islamic extremists just nine months after the coordinated ISIS assault in November last year that left more than 130 people dead.

It turns out that the fire in the Eiffel Tower was reportedly the result of “a technical fault with fireworks planned for later in the evening to celebrate Bastille Day,” but this hardly lessened the apocalyptic feeling of gloom and terror: Innocent citizens of France lay dead and dying while the Eiffel Tower was in flames.

Paris was being shaken yet again, and based on reports that the truck driver was a Muslim immigrant from Tunisia, there was every reason for Frenchmen to believe their country “was once again under attack by Islamic extremists.”

But I don’t want to focus here on radical Islam. I want to focus on the mood today in America, France, much of Europe and in many other parts of the world. It is a time of extreme uncertainty, a time of anger and fear, a time of division and polarization, a time of escalating violence.

To focus on America for a moment, think of the growing racial tensions in our country. Think of the divisiveness of the presidential elections. Think of the polarizing of whole groups of Americans.

No wonder Americans are buying guns at unprecedented rates. It makes them feel secure — at least a little secure. But all the guns in the world will not produce peace of mind, and there is not a politician on the planet who can instill real hope into a nation in turmoil — not in America, not in France, not anywhere.

The answers that America and France and the nations so desperately need are found in one place only: in God — meaning the one true God, fully expressed in Jesus, in contrast with Allah, the God of the Quran.

Jesus spoke about a time in the future that would be so traumatic that “people will be fainting from fear and from the expectation of what is coming on the world, for the powers of the heavens will be shaken” (Luke 21:26, NET).

This will be far beyond anything we have yet seen. Yet this was His counsel to His followers: “But when these things begin to happen, stand up and raise your heads, because your redemption is drawing near” (Luke 21:28, NET).

Our perspective is different from the perspective of this world, although we feel pain like everyone else and we mourn and weep like everyone else. Yet we know that this world will be shaken, that everything we see is only temporal, and that our hope is in an eternal God who gives us eternal life and eternal hope that can outlast the hell of this age.

That’s why the psalmist could write,

God is our refuge and strength, a helper who is always found in times of trouble. Therefore we will not be afraid, though the earth trembles and the mountains topple into the depths of the seas, though its waters roar and foam and the mountains quake with its turmoil. Selah There is a river — its streams delight the city of God, the holy dwelling place of the Most High. God is within her; she will not be toppled. God will help her when the morning dawns. Nations rage, kingdoms topple; the earth melts when He lifts His voice. (Psa. 46:1-6, HCSB)

Now is the time for those of who have taken refuge in the Lord to shout out to the world, “There is a better way! Turn away from your sins and your fleshly plans and put your hope in the living God.”

We know all too well that human kingdoms will fall and that human hopes will be dashed. But we know with even greater certainty that God’s kingdom will last forever and that whoever hopes in Him will not be disappointed.

In the years ahead, we may return to more peaceful, harmonious times for a season, or we might fall headlong into international chaos. Either way, “The name of the LORD is a fortified tower; the righteous run to it and are safe” (Prov. 18:10, NIV).

Whoever you are, whatever you are going through, if you call out to Him and run to Him for safety, you will find a place of escape from the storm. As Jesus said to His disciples, “In the world you have trouble and suffering, but take courage — I have conquered the world” (John 16:33, NET).

It’s Becoming Harder to Ignore the Genocide in Nigeria