“Once You Start Moving, You’re Not Afraid Anymore” 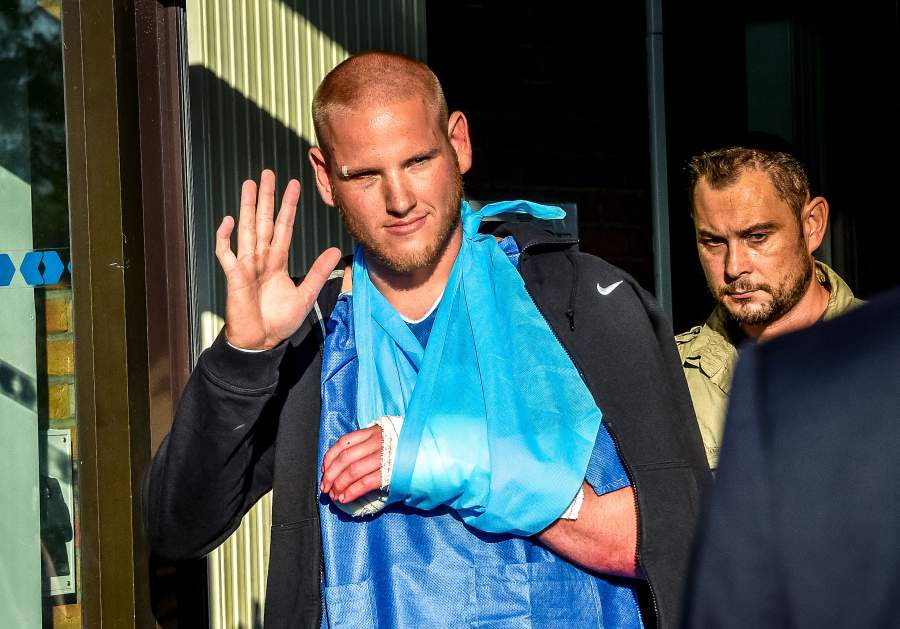 The jaw of the world dropped this past week when news broke of a thwarted shooting on a French train. Childhood friends Spencer Stone, Alek Skarlatos and Anthony Sadler were vacationing in France and taking the train into Paris. Not far from the city, Skarlatos awoke to see a man holding an AK-47. He yelled at Stone, “Let’s go, go!” Stone immediately jumped up, raced down the aisle, and smashed into the gunman. He held onto the shooter as the two engaged in a ferocious struggle, bullets ricocheting as they danced in the walkway.

The gunman slashed him with a box-cutter, inflicting awful wounds on his neck and  nearly severing his thumb. Stone absorbed the blows until Skarlatos knocked a Luger pistol out of the gunman’s hand and picked up his AK. Skarlatos, like Stone a trained soldier, repeatedly smashed the gunman in the head. Passengers Chris Norman, a British entrepreneur, and Sadler joined in to subdue the shooter.

The heroism does not stop there. Stone, bleeding profusely, made his way to a passenger struck by a bullet and plugged his wound with his hands. The action helped save the man’s life. We now know the passenger was another American, musician and teacher Mark Moogalian, who had first snatched the AK-47 from the shooter, only to be shot with the terrorist’s handgun.

Soon the train stopped and authorities swarmed the scene.

An American musician teaching in France and three young American friends on vacation, working with an Englishman had acted almost instantaneously. As a result, they saved the lives of dozens, perhaps hundreds, of riders.

The episode sounds a bit like something out of the Jason Bourne series, but it is true, heroically true. The New York Times recorded Norman’s perspective on entering the fray: “My thought was, ‘I’m probably going to die anyway, so let’s go.’ Once you start moving, you’re not afraid anymore.” Instinctual self-sacrifice saved the day. You could call that strange species of behavior, “virtuous manhood,” or if you really wanted to push the envelope, “manhood.”

Of course, women can and have demonstrated extraordinary physical courage. But that’s not the truth our politically correct culture is in danger of losing. In a feminist age, we have grown used to hearing that men are babies, idiots, goofballs. Young men in particular have memorized the anthem of low expectations set to the drumbeat of failure. In a 2.0 economy, they can’t find work. In a feelings-driven society, they contribute only fart jokes. In a climate hostile to traditional gender roles, they have no script.

In sum, men are not necessary anymore, as elite journalist Hanna Rosin has said. Better for them to accept their global demotion and to lose themselves in a beer-fueled haze, binge-watching John Wayne movies in a last pathetic bid to hang onto something “manly.” In 2015, the archetype of the American man is Uncle Rico from Napoleon Dynamite, living in a camper and recounting the glory days of high school football.

Except he is not. Look at the three young men we know the most about: Stone, Skarlatos and Sadler. Instead of thinking only about their own security, they acted to help others. In a flash, out of the fog of a much-needed nap on a train, they woke up and ran down the aisle toward a killer with a gun.

This, ladies and gentlemen of the gender-neutral age, is what men, true men, virtuous men, say in times of great peril: “I’m probably going to die anyway, so let’s go.”

This, friends and countrymen of the transgender-obsessed body politic, is what men — again, actual men — say when they realize they face the real prospect of death: “Once you start moving, you’re not afraid anymore.”

This, boys and girls who are currently learning that manhood is a fiction and boyhood is a disease, is what men talk like in extreme danger: “Let’s go, go!”

You see, traditional manhood fears death, but it fears something even worse: being a coward. For a man, the only thing worse than a bullet in the kidney, or a box-cutter across the throat, is the failure to act. To act self-sacrificially on behalf of women and children is the epitome of virtuous manhood. It reflects, in fact, the apex of Christian doctrine: a Savior-husband giving his life to save a bride, the church.

Teach a boy that he is an idiot, that he can only ever ascend to Fantasy Football champion, that he cannot ever measure up to his sisters, that he is at base an animal, and watch in wonder as he fulfills all your worst predictions.

But teach him that he has immense dignity and worth, that he was made — whatever his chest size, whatever his height — to spend himself for the good of others, and you will form the kind of young men who do not cower when a terrorist stands up, sweating and fevered, to fulfill Allah’s will by mowing down innocents. This kind of young man wakes up from his nap, sees bloodshed on the horizon, and moves with a swiftness he has trained for to sacrifice himself for others. He may die, he knows. But he will die with honor.

Once you start moving as a man, when you rise to the call of self-sacrificial manhood, turns out something true and indelible comes into focus: you’re not afraid anymore.

Owen Strachan’s new book The Colson Way: Loving Your Neighbor and Living with Faith in a Hostile World is now available.