Forget the Myths, Ignore the Hype; Here’s What We Really Know About Jesus’ ‘Missing Years’ 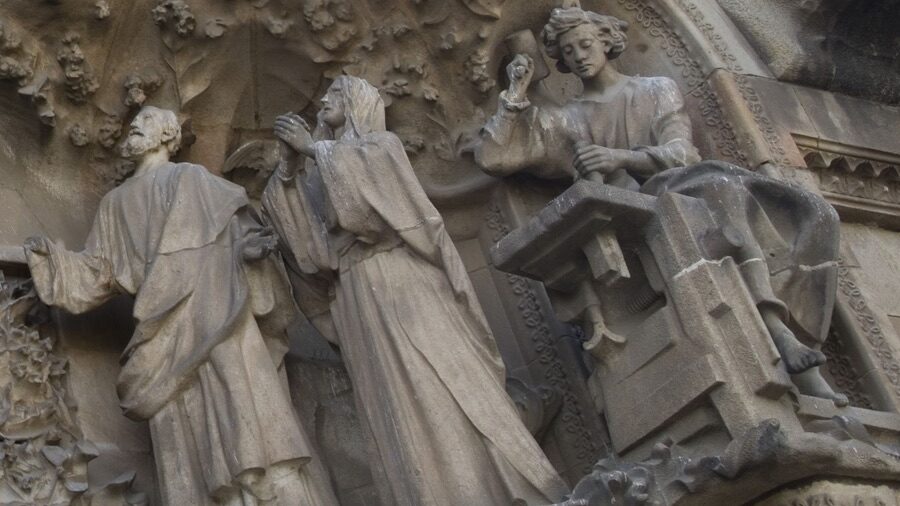 The Holy Family, with Jesus as Carpenter's Apprentice, Church Facade in Barcelona

I’ll bet you missed this in the post-election brouhaha: “Christmas” began for Hindus with their Divali celebration in November. It fits for them because Jesus is the son of Brahman, one of their avatars (divine incarnations), the son of (Brahman). He spent six of his “missing” years in India, then went on to Tibet for further study in Buddhism. So some folks say, anyway. It makes me ill just quoting them. The one good thing I can say is that it shows the great power of Jesus’ name. Every religion except Judaism, it seems, wants Him as one of theirs.

But how do we know it’s not true? And what do we know of Jesus’ “missing years”? More than you might think, actually, but no more than it would do us any good to know.

We know He was sinless, that is, spiritually and morally perfect. I’ve already raised the question of how utterly strange that must have been for His family. Remember, that doesn’t mean He never knocked His food over accidentally as a toddler, or that He never cut a board or a stone wrong while working in Joseph’s shop. He had things to learn, just like we do, just not the part where it has to do with learning how to relate in righteousness with God and others.

Who Did They Think His Father Was?

Jesus’ earthly father, Joseph, died before He began His adult ministry. We know this because he never appears again after Luke 2. Still in Luke 4:22 His neighbors in Nazareth call Him “Joseph’s son.” Apparently that meant good things to them, as they were all speaking well of Jesus, for the moment, anyway. It took until a bit later in the chapter before they’d try to throw Him off a cliff. (More on that in a moment.)

His enemies thought He was a bastard — a child born illegitimately. In a way you can’t blame them; He really was born miraculously out of wedlock. They didn’t believe the “miraculous” part of that, naturally. You can hear them sneering it in John 8:19, where they ask, “Where is your father?”

Even at age twelve He understood, and He didn’t get it by traveling to Tibet.

Some Bibles capitalize “father,” but that’s the translators’ decision. It’s not in the original Bible, and I think they got that part wrong. Surely Jesus’ enemies wouldn’t have seen Him relating to God as His Father, the same way He did, or the way we do today.

John 8:27 tells us plainly, in fact: They didn’t understand He’d been sent by God the Father. They thought He was a Samaritan (John 8:48), a half-breed, not fully a Jew. They said of Him in John 9:29, “As for this fellow, we don’t know where He is from.” (If they were wondering where He’d been brought up, they could have just asked.) And John 8:41 must have been meant as an insult: “We were not born of fornication,” with the rest of the sentence left hanging thick though unspoken in the air:  “We were not born of fornication like You were.”

The Young Jesus Knew Who His Father Was

Jesus knew exactly who His Father was, and He knew it very early. Some theologians like to ask whether Jesus really knew He was God, and how old He was when He realized it. A famous passage in Luke 2 explains a lot. He was twelve years old. Mary and Joseph had brought Him to a feast in Jerusalem, and He displayed His future independent cast of mind by staying behind when they left. They came back looking, and after three days found Him in the Temple “listening and asking questions.” Everyone who heard him, the text says, was “astonished at His understanding and His answers” (verses 46-47).

Don’t you wish you could have heard that! What kind of questions did He ask? Later on in His adult ministry He used one question after another to teach. How much was He teaching even then?

Mary was mortified, though (48-49): “Son, why have You done this to us? Look, Your father and I have sought you anxiously.” He said, “Why did you seek Me? Did you not know that I must be about My Father’s business?” Look closely. He was saying, “No, Mother. How can you not remember? Joseph isn’t my Father. Only God is.”

Jesus Didn’t Get This Teaching From Anywhere Back East

He knew. Even at age twelve He understood, and He didn’t get it by traveling to Tibet. Sure, other religions like to say, “Look, He taught our stuff!” There are truths that anyone can learn anywhere. If a person lets his imagination roam freely enough, with his eyes and his brain skipping past about 95 percent of what Jesus said, he really could make some of it out to be Eastern-seeming.

He wouldn’t get anywhere that, though, with Jesus’ teaching on the Kingdom of God — the core of His message in the first three Gospels. He’d have even more trouble (if that’s even possible) in John, where He is clearly the unique Son of the only true God.

Two can play that game though. Let’s use some imagination and selective reading ourselves. We’ll use a passage we’ve already glanced at once here, Luke 4:16-22. Imagine some other young lad from Nazareth returning there after years and years away, learning the “superior wisdom” of the East. Picture that young man doing what Jesus did in Luke 4:16, 20, and 21, going into the synagogue, standing up to read from the Scriptures, then getting ready to teach.

And then we’re going to imagine what would happen next. And hey, we’re in luck! It’s right there in the same passage! We just have to skip over the part where they’re speaking well of Him and enjoying His “gracious words.” We’ll need to jump on past the good word they speak of Joseph, His adoptive father. Then we’ll need to completely ignore what Jesus taught them from their own Scriptures, letting them know He wasn’t going to play the hometown boy role for them, and that God loved other people too.

Skip all that, go straight to verse to 28, and there’s where you’ll finally find the answer that makes sense: “They were filled with wrath, and rose up and thrust Him out of the city; and they led Him to the brow of the hill on which their city was built, that they might throw Him down over the cliff.”

That’s the first thing that would’ve happened to any Jewish boy who’d left Nazareth and come teaching Hindu or Buddhist “wisdom.” Jesus never would have made it as far as standing up to read. They’d have stoned Him. Immediately.

Yes, three years later the religious leaders had Him executed, but it wasn’t for teaching the Wheel of Samsara. It was for teaching Himself as the one unique Teacher, God, King, and Judge.

Forget the Missing Years Myths; Be Thankful for What We Know

So forget the myths and stick with what we know. It isn’t much, and it isn’t all we wish we knew. Honestly, though, we should be careful what we wish for. God gave us what we need. I believe it would have harmed more than helped us if He’d given us more of the story of Jesus’ early years. I’ve spoken about that on my podcast, and I’ll have more to say on it here in print later this week. I think you’ll be thankful, too, that we have exactly as much of the life of Christ as we have.

In the meantime, if this has led you to think about Jesus in new ways from the Scriptures (not from other religions’ fevered imaginations), you can find much more like it in Too Good to be False: How Jesus’ Incomparable Character Reveals His Reality. Please pick up your copy today and find yourself knowing Jesus better than ever — in time to share with others for Christmas, even!