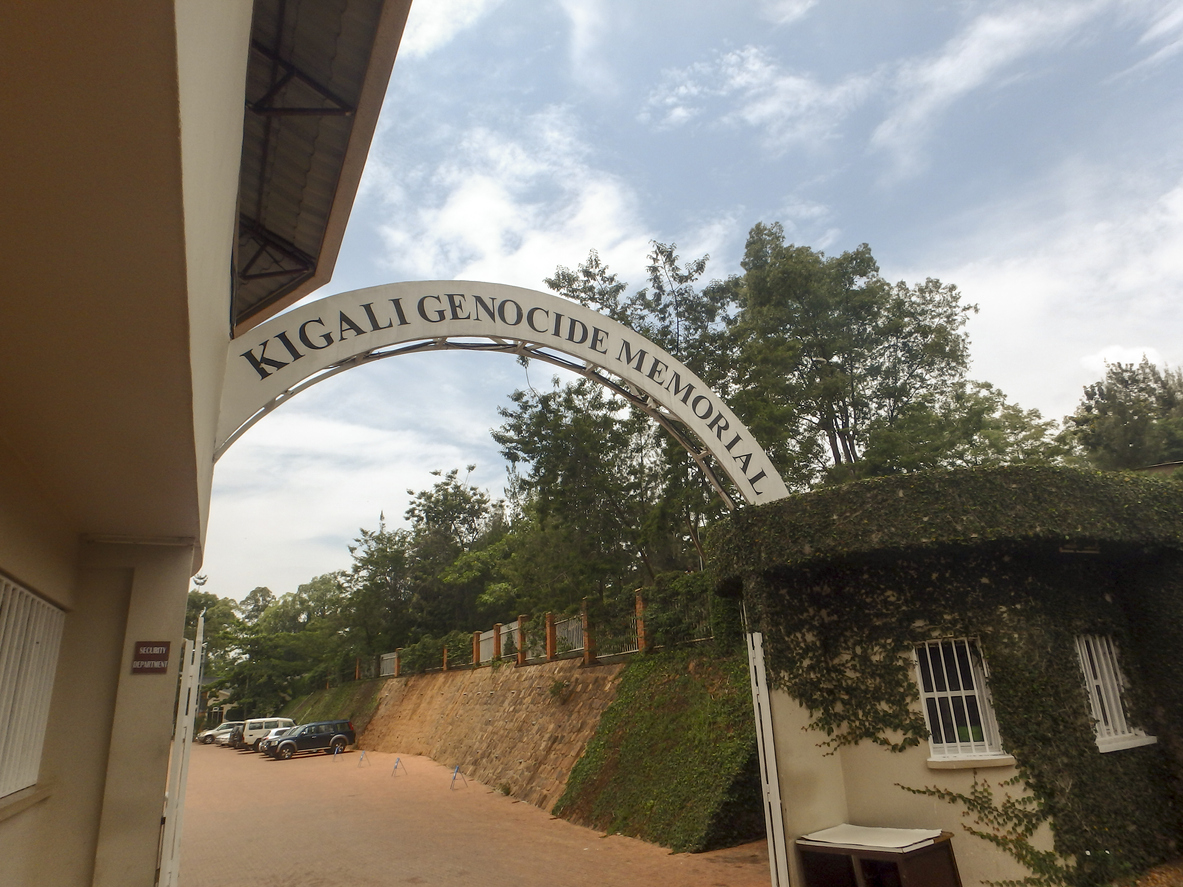 Kigali: Sign in front of National Memorial to the victims of Genocide in Kigali, Rwanda, Africa.

Let me start with two pieces of good news, then pose some unsettling questions.

It is very good news that a court convicted for murder the three white men who hunted down Ahmaud Arbery and killed him. They’d claimed that they were “volunteer deputies” performing a “citizen’s arrest” of a young black man whom they suspected of trespassing and misdemeanor robbery. The jury rightly rejected this effort to put a little lipstick on the pig that was a lynch mob. Some 50 years ago, three white men might well have gotten away with something like that. White juries in the South often voted based on tribalism more than justice — as juries of different ethnic composition today are also tempted to do.

It’s equally good news that Kyle Rittenhouse was entirely vindicated for his actions in the Kenosha, Wisc., riot. He’d turned up to help small business owners save their livelihoods from mobs of white Antifa communists and BLM-led black looters.

Our Stasi media did their best to paint Rittenhouse as a “white nationalist” member of a dangerous “militia” who was fighting for “white supremacy.” There was never any evidence for such life-ruining claims. But they went viral thanks to reporters like Chris Wallace and candidates like Joe Biden. They will haunt the innocent Mr. Rittenhouse for decades, every time he tries to rent an apartment or apply for a job. If leftists like Rep. Jerry Nadler have their way, these false claims will spark a federal civil rights persecution of Rittenhouse. Which is why I advise Kyle to flee while he can to Brazil.

Rittenhouse Should Never Have Been Arrested, Much Less Charged

Of course, as Roger Kimball points out, the case should never have gone to trial. Police had high-definition video of three Antifa thugs chasing Rittenhouse and attacking him. He only fired at people who’d threatened his life, pointed a gun at him, clubbed him with a skateboard, and hunted him through the streets. Only the frenzy fed by our Woke institutions and their cartoonish conspiracy theories about “systemic white racism” forced such an open-and-shut case to trial.

At least Kyle Rittenhouse got the fair hearing which Omaha bar owner Jake Gardner knew he never would. Gardner shot a multiple-felon looter who’d trashed his business, assaulted his elderly father, and put Gardner in a sleeper hold—in a plain effort to kill him. All of it on crystal-clear video.

But the Omaha prosecutor who’d first cleared Gardner was subject to six weeks of angry Antifa and BLM mobs at his home. To make all that stop, he appointed a race-hustling “special prosecutor” with George Soros links. That prosecutor promptly indicted Gardner on enough counts to send him to prison for 100 years. GoFundMe shut down Gardner’s efforts to fund his defense, and his landlord evicted him. That’s when decorated U.S. Army combat veteran Jake Gardner, already a victim of PTSD, took his own life. God rest his soul, and keep his memory alive.

Unsettling Question #1: What if Rittenhouse Had Shot Black Communists?

Leave all the other facts exactly the same. But change the skin color of the men who’d tried to kill him. Would Rittenhouse have ever gotten out on bail? Would people have rallied to contribute to his defense? Would he have received the same fair trial that he did? Or has the leftist demonization of white Americans gone too far for that? Does it extend to giving carte blanche for killing to unhinged black Americans? Maybe to drug-addled drifters who take seriously the constant drumbeat of anti-white messages in schools, colleges, media, and human resource departments.

You know, people like Darrell Brooks, Jr. He’s the man accused of using his truck to conduct a massacre of white Wisconsites at a Waukesha Christmas parade, killing six and injuring 60. Details of the funerals for the little old ladies and their grandchildren keep trickling in, and we should keep up our prayers for the victims and their families. It took almost a day for major media to grudgingly admit the most basic facts about Brooks. For instance, that he’s black.

And what’s more, an angry black nationalist with a public track record of anti-white hate, along with violent felonies. As The Blaze reports, “Brooks was released on a shockingly low $1,000 bail just ten days before he allegedly perpetrated the massacre at the Christmas parade after being charged with, among other things, running over the mother of his child with a vehicle.” The D.A. in that case? Another local official elected with help from George Soros.

Brooks is accused of driving his SUV in a “zig-zag pattern” with the intention of striking “as many people as possible,” according to the criminal complaint.

The suspect allegedly refused to stop even after an officer banged on the hood of his red Ford Explorer, and another officer fired three shots into the vehicle.

Waukesha Mayor Shawn Reilly described the incident as a “Norman Rockwell-type” parade that “became a nightmare.”

Reporting on the massacre, Pedro Gonzalez notes what Brooks did right after killing as many white citizens as he could:

After the incident, an utterly remorseless Brooks went to a stranger’s house and pretended to be a homeless man pleading for help. The homeowner invited him in, gave him a jacket, and made him a sandwich before police arrested Brooks on his front porch. Along with much of the media, Waukesha Police Chief Daniel Thompson is essentially treating the incident as a mass casualty “accident.” Thompson, who has been reluctant to associate Brooks’ political views with the attack, helped organize a Black Lives Matter march where his officers kneeled with and praised protestors last year.

Gonzalez observes that Republicans overly eager to score “anti-racist” points have been complicit in supporting such soft-on-crime measures as “bail reform.” That’s one reason men like Brooks are walking the streets.

Darrell Brooks, Jr., was charged with five counts of intentional murder, and will likely face a sixth now that another victim has died. But so far, the State has not invoked its robust hate crimes law against Brooks. That law punishes attacks on people motivated by their ethnicity, race, sexual preference, etc. Brooks has a long public history of calls for violence against white people, Jews, and others. Why not add these obvious charges? Would a white defendant who tried to massacre blacks, with a long track record of hate speech, be spared such charges? But then that defendant would not have spent years hearing his hate reinforced and justified by major media and institutions, either.

Remember when Kyle Rittenhouse broke down crying, as the teenager recalled the violent mob that tried to kill him? The moments when he was forced to end three human lives? Mainstream and social media were full of sneers about “white men’s tears.” We witnessed similar scorn when the innocent Brett Kavanaugh waxed emotional as he refuted Christine Blasey Ford’s fake rape charges on television. It’s okay to sneer at white men today as it was to sneer at Jews in the Germany of 1932, and Tutsis in the Rwanda of 1994. Those groups are “privileged,” you see, and none of their members deserves any human empathy. We know what comes next. The victims of Waukesha certainly do.

Let’s consider the ugliest possible “What if” question, shall we? What if some well-meaning white teenager like Kyle Rittenhouse had been present at the Waukesha Christmas parade? Let’s say he was going hunting later on with his dad. So his rifle was in his truck. And he saw Darrell Brooks, Jr., mowing down the little girls with pom-poms and grandmas with cameras.

If he had had used his legal gun to stop Darrell Brooks from slaughtering six people and injuring 60, what would our media be saying about him? Would he be a hero? Or would he end up in a cell for long months, facing murder and hate crime charges, while leftist media and Marxist mobs descended on Waukesha? Would that young man who saved his neighbors be praised? Or persecuted? Would he spend the rest of his life living down the charge that he was part of some neo-Nazi militia?

Blue state mayors and governors gave us their answer in 2020, during the George Floyd riots. One political faction can run wild in the streets, set fire to cop cars and courthouses. And the woman running for vice-president of the United States will help to raise their bail money. But if honest citizens dare to defend themselves? Or counter-protest? The whole system will rouse itself to action to destroy them. That’s why the D.C. jail is full of peaceful Jan. 6 protesters, not Antifa arsonists and thugs. And our elite institutions and media are still outraged at Kyle Rittenhouse, not Darrell Brooks.