Fact Check: Trump is Right. Violence is Rising in Sweden

While Trump may have slightly misspoken referring to violence in Sweden occurring the previous evening, he was correct about rising violence generally. 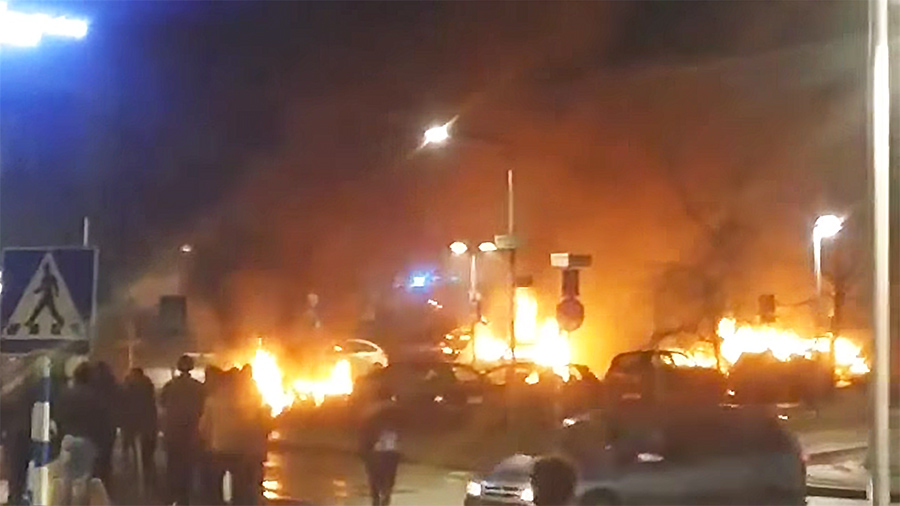 The media pounced on President Trump after he declared Saturday that large-scale immigration in Sweden is not working out. Appearing at a campaign rally in Florida, the President defended his ban on immigrants from dangerous countries.

Swedish authorities immediately responded with denials, and much of the media media fixated on his reference to “last night.” Trump clarified later that he was referencing an episode of Tucker Carlson Tonight, which had aired the night before.

My statement as to what's happening in Sweden was in reference to a story that was broadcast on @FoxNews concerning immigrants & Sweden.

Left-leaning news outlets like The Atlantic actually referred to Sweden as “low crime.” Trump addressed them as well in a tweet:

Give the public a break – The FAKE NEWS media is trying to say that large scale immigration in Sweden is working out just beautifully. NOT!

Countries representing all the crimes this week: Iraq, Iraq, Turkey, Syria, Afghanistan, Somalia, Somalia, Syria again, Somalia, unknown, unknown country, Sweden. Half of the suspects, we can’t be sure because they don’t have any valid papers. Which in itself usually means that they’re lying about their nationality and identity.”

Rising Number of Rapes and Violence in Sweden, Largely by Muslim Immigrants

This was all an exercise in diversion from this glaring fact: Sweden’s increase in violence comes largely from the large influx of Muslim immigrants entering the country.

In January, Malmö Police Chief Stefan Sinteus issued a desperate plea for help combating “the upward spiral of violence.” The city is composed of 32 percent immigrants. British UKIP leader Nigel Farage refers to Malmö as “the rape capital of Europe.”

Over the past 15 years, Sweden has taken in 650,000 immigrants seeking asylum. About 35,000 claimed to be “unaccompanied minors,” but could very well be young men disguising their age in order to improve their chances of not being deported.

Many are unemployed and jobless, straining the country’s welfare system. According to the Swedish Migration Agency, another 25,000 to 45,000 immigrants are expected this year.

Videos of the rioting and burning uploaded to YouTube reveal the extent of the violence, and contradict the media’s claims there has been no increase in violence. Rioters often outnumber the police, as they throw stones at the officers and beat them up.

In the video below, a Swede in Rinkeby contradicts Swedish politicians and media reports. She says there isn’t a large police presence; they show up after the riots calm down. Law enforcement has set off 55 no-go zones, she reports. Law enforcement will not go into them unless in large patrols. The left-leaning media denies the existence of the no-go zones. The heart of Rosengård, Malmö, in Sweden, where 60 percent of residents are foreign born. The generous Swedish welfare system with its above-standard housing is a big draw for immigrants.

Videos show the radical Islamists plotting against law enforcement. They will plant a bomb in a trash can, then put it on fire. When the fire department comes to put out a fire, the bomb explodes on them. Similarly, they set traps for the police. They will report a rob and throw rocks at them.

The woman goes on to say that Trump’s remarks were accurate. In fact, the reason the violence doesn’t make the news is because it’s so prevalent. “There aren’t any headlines about this kind of stuff,” she explains, “since it’s so common.” Additionally, the Swedish politicians who deny it’s happening are “too proud … to admit they got it wrong. … They want to believe that they are so morally superior to everyone else that their multiculturalism can’t fail and that their feminism can’t fail.”

Such violence by Muslim immigrants is not unique to Sweden. The problem is cropping in other European countries that have welcomed immigrants from Muslim countries. Writing in Algemeiner, Abigail R. Esman described the infamous New Year’s Eve attacks on women in Cologne, Germany, as “a different kind of terrorist attack.” Muslims in Europe have long exhibited misogyny, abuse and sexual exploitation of women, writes Esman, author of  Radical State: How Jihad Is Winning Over Democracy in the West.

All of these trends have paved the way for sexual violence as a natural weapon for jihad in the age of ISIS. Indeed, we’ve seen it used not just in the mass gang rapes in Europe in recent years, but in the sexual enslavement of Yazidi girls in Syria and Iraq. We’ve seen it further in ISIS propaganda that even encourages its male members to rape women to bring them “closer to Allah.”

Thirty years ago, political and media elites might have been able to hide this. But they can’t prevent ordinary citizens from recording violent riots and arson with their smart phones and uploading the footage to YouTube and Facebook. The truth will get out.

Does Tossing Verbal Bombs Lead to Making Real Ones?

When is the #MeToo Movement Going to Pay Attention to Bill Clinton?