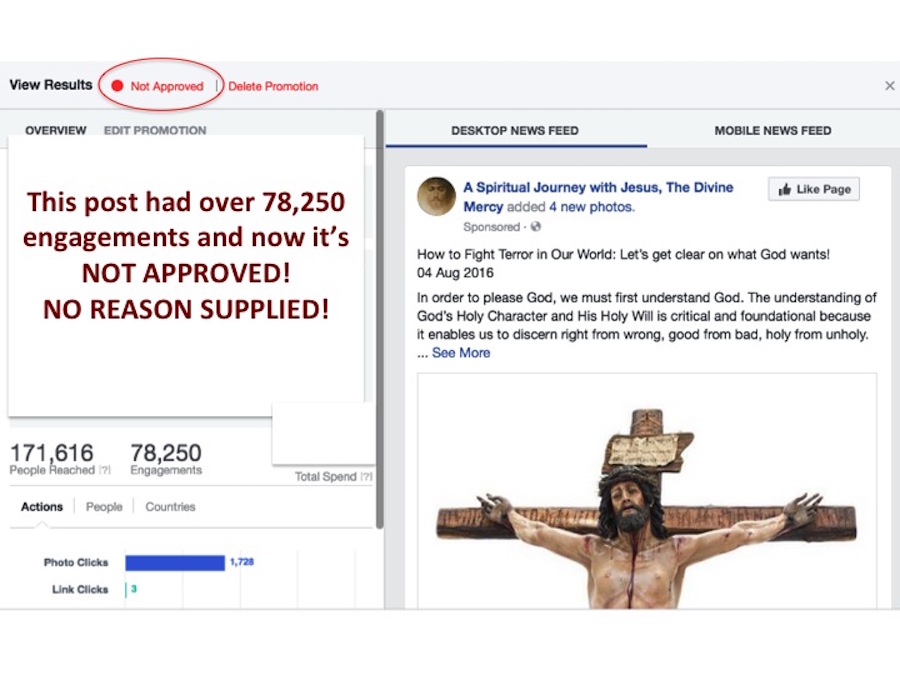 UPDATE April 2, 2018 – The Franciscan University of Steubenville, a Catholic college, reported that one of its ads submitted to Facebook containing an image of Christ on the cross was rejected for “shocking, sensational, or excessively violent content.” It is of the San Damiano Cross, a medieval icon-style painting of the Crucifixion.

Sylvia runs the website Passion of Christ. She posts content from it on her Facebook page, A Spiritual Journey with Jesus, The Divine Mercy. She is promoting a global peace movement on Facebook called “A Peaceful Revolution in the Name of Jesus Christ.” It unites Christians all over the world in prayer and remembrance of the Passion of Christ daily at the time Jesus died for us, 3 p.m. (Each of us in our local time zones.) She buys ads from Facebook to promote her posts. They contain spiritual reflections on the Word of God with related images.

But Facebook recently started rejecting some of her ads. Facebook accompanied some of the rejections with, “Your ad wasn’t approved because it doesn’t follow our Advertising Policies. We don’t allow ads that contain shocking or sensational content, including ads that depict violence or threats of violence.” Facebook rejected some of them because the posts included images of the Passion of Christ. Christ is portrayed in the crucifixion process, wearing the Crown of Thorns or on the Cross. When Sylvia inquired about the rejections, all she got was a computer generated message. Many of her ad posts were approved in the past by Facebook and got millions of “likes.”

Sylvia lamented,”Facebook is calling photos of the Passion of Christ violent, and indeed the crucifixion of Our Lord Jesus was violent. But it is deeply troubling to me that as a Christian advertiser I am being limited in what images I can share.” Pictures of Jesus being crucified have been a fixture in society for two thousand years. They are not glorifying violence. They show reverence for what Christ underwent. There are over two billion Christians in the world, one-third of the population. Christians find these images fundamental to their faith. Ads not approved include titles like “Following Jesus,” “Being Christian,” “Are you being deceived by the devil?,” “The Open Door to Heaven,” “Easter – The Victory of Jesus Christ,” and other similar titles. Many of them contain no photos of Christ during the crucifixion. The best guess is Facebook is applying its ban on “shocking, sensational, disrespectful or excessively violent content” to all of Sylvia’s content. One of the ads that was rejected with no reason contains the phrase “signed in the precious blood of Jesus.” It is a stretch to say that phrase fits the list of banned content.

Frustrated, Sylvia wrote an article about the situation entitled “Will the Future of Facebook Include Jesus?” A post Sylvia wrote called Desire (speaking about how we can resolve global issues), promoted through her Facebook page, achieved well over 300,000 likes from people all over the world. But recently, when she applied to run an ad for it again, Facebook rejected it. Ironically, the post denounces violence. “Jesus died not for us to live at war and in poverty, but for all to live in peace, without threats of violence where our global prosperity would be shared for the benefit of all.”

Sylvia believes Facebook needs to address the problem by responding to advertiser issues and concerns. When she reports an issue through the ad reporting tool, all Facebook sends her is a computer generated response. It says simply, “Your feedback will be used to improve Facebook. Thanks for taking the time to make a report.”

She notes that she can buy a $50 piece of software and open a support ticket through which she should receive personalized support. But in the case of Facebook, she can’t get answers even though she has paid thousands of dollars. “All advertisers should have access to a process whereby support tickets can be opened and tracked and escalated where necessary to tier two or three support,” Sylvia states. “That’s how legitimate IT companies work.”

Facebook has come under fire for censoring Christians in the past. It has suspended accounts and posts from users related to Christian issues. Fortunately, after protest, Facebook has reversed many of the suspensions. In this case, the damage is proving to be worse. Facebook has not replied to Sylvia’s objections.