Enough Already With the Swastika Comments 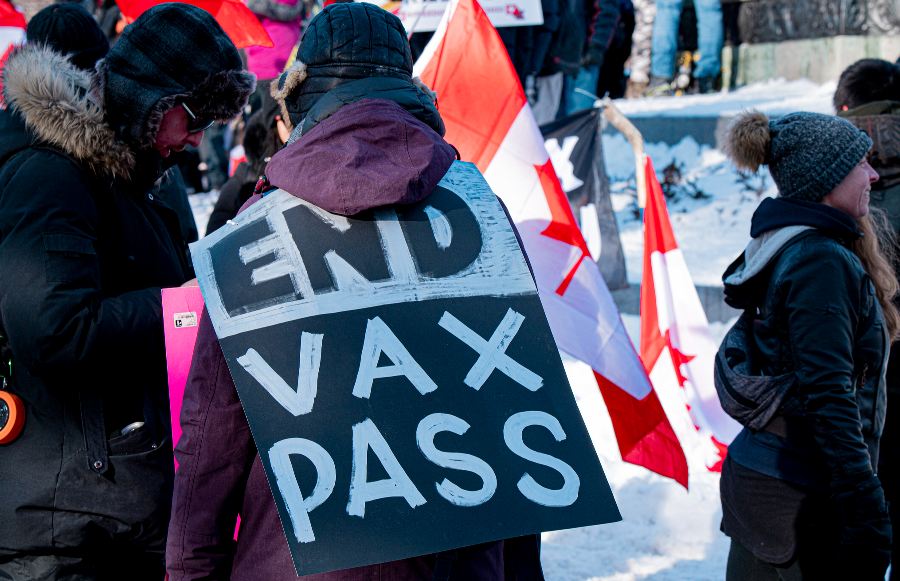 Canadian Prime Minister Justin Trudeau’s comment to a Jewish MP that, “Conservative Party members can stand with people who wave swastikas” has rightfully drawn sharp criticism and rebuke. Under no circumstances can his comments be justified. Unfortunately, his is but the latest (and worst) misuse of the Nazi image in the current debate over COVID restrictions.

In a heated debate in the House of Commons this past Wednesday, Conservative MP Melissa Lantsman, stated that Trudeau, with his dictatorial crackdowns on the Freedom Convoy “fans the flame of an unjustified national emergency.”

Lantsman, herself Jewish, was referencing Trudeau’s highly controversial invoking of the Emergencies Act against the truckers of the convoy and their supporters, an action that even the New York Times described as a “rare step.”

His critics, in turn, have called him a “dictator,” with Conservative MP Andrew Scheer stating, “We know the PM finds democracy inconvenient and that he admires China’s dictatorship. So will the prime minister admit that this is all just a move to crack down on dissent?”

Scheer was referencing a 2013 video of Trudeau answering the question of which country he most admired. He explained that it was China, saying, “There’s a level of admiration I actually have for China, because their basic dictatorship is allowing them to actually turn their economy around on a dime.”

They were saying to their government, “You’re acting just like the Nazis with your COVID restrictions.” But that’s where the protesters were in error as well (although their error was not nearly as ugly as the Prime Minister’s).

Now, his critics claim, he was simply acting the part, making unilateral decisions as if the truckers and their supporters were terrorists out to overthrow the nation.

Still, Trudeau’s comment to MP Lantsman went even further, calling the protesters “people who wave swastikas.” What an absolute outrage, especially to a Jewish woman.

But what was he actually talking about? Which protesters were “waving swastikas” (or, for that matter, waving “the Confederate Flag”)?

According to the left-leaning fact-checking website Snopes.com, “We found that a small number of swastikas and Confederate battle flags were indeed displayed by a few ‘Freedom Convoy’ protesters.”

That was it: “a small number of swastikas and Confederate battle flags,” and this out of tens of thousands involved in the Freedom Convoy. Talk about a misrepresentation. And who knows, if, in some cases, it wasn’t counter-protesters trying to make the real protesters look bad.

But that didn’t stop the Foreign Policy website from claiming, “Not unlike the U.S. Capitol riot, the movement has attracted a diverse array of self-described patriots waving Canadian flags alongside Confederate battle flags, swastikas, symbols related to the Quebec sovereignty movement, and QAnon conspiracy banners.”

What a misleading and exaggerated picture, whether or not one supports the Convoy. A much different picture is painted by Pastor Jim Garlow here, as Christian truckers were singing Martin Luther’s famous hymn, “A Mighty Fortress Is Our God.”

Either way, whether the protesters are righteous, unruly, or a combination of both, we still need to address the presence of even a few swastikas. What was the point these protesters were trying to make?

We’ll let Snopes explain: “Most of the swastikas and other symbols appeared to be pictured on signs as a way of mocking and protesting government restrictions.”

The first example cited dated to Jan. 29, when “David Cochrane, a senior Parliamentary reporter for CBC News who is based in Ottawa, tweeted this picture that appeared to show a protester comparing COVID-19 vaccine mandates to tactics carried out in Nazi Germany.”

So, the protesters were not celebrating the Nazis or identifying with the Nazis. It was the exact opposite. They were saying to their government, “You’re acting just like the Nazis with your COVID restrictions.”

But that’s where the protesters were in error as well (although their error was not nearly as ugly as the Prime Minister’s).

It’s Time to Drop This Comparison

There is simply no comparison between Canada’s COVID restrictions, as draconian and overdone as they may be, and the murderous, genocidal, demonic policies of the Nazis.

Canada has not systematically slaughtered (in cold blood) 1.5 million children and babies of one particular group and religion. (The Nazis did this to the Jews.)

Canada has not systematically slaughtered (in cold blood) 3 million out of 3.3 million people living in one province. (The Nazis did this to Polish Jews.)

Canada has not built gas chambers to kill their own citizens or crematoria to burn their bodies.

Yet, in the last two years, the comparison between government COVID restrictions (in many different nations) and Nazi policies has often been made.

Simply stated, it needs to be dropped, since it both minimizes the evil of Hitler and his henchmen and exaggerates the bad policies of some governments today.

As for Prime Minister Trudeau, he owes the Conservative MPs, the Jewish people, and the people of Canada, a humble, unequivocal apology.