Leave a seat empty at your Thanksgiving dinner table for a fallen American hero. 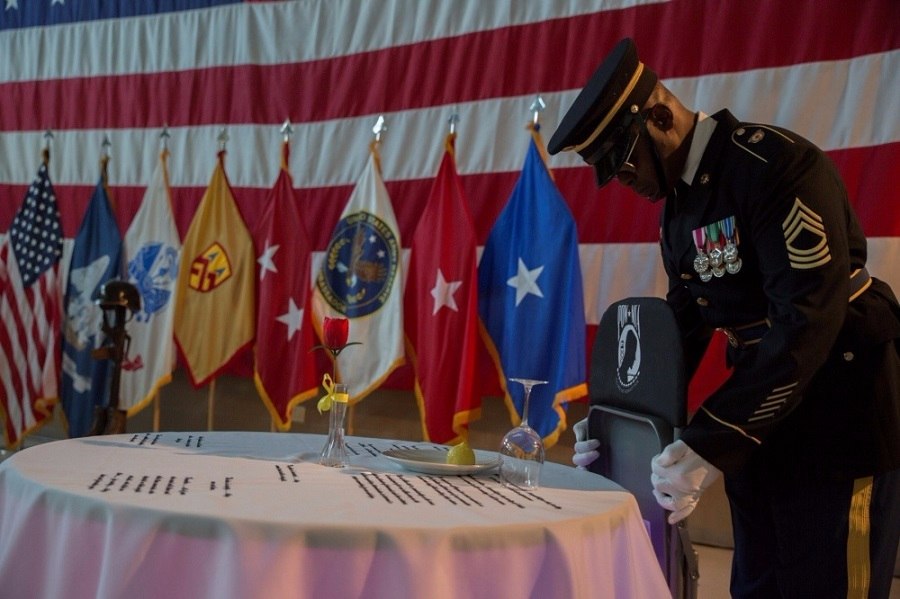 A U.S. Army Reserve soldier sets an empty chair at the fallen soldiers table during the Gold Star Mothers and Family Day celebration at Naval Air Station Joint Reserve Base New Orleans in Louisiana on September 25, 2016.

While millions of Americans sit down for Thanksgiving dinner, thousands of tables will have empty seats.

In addition to military families praying for loved ones currently deployed overseas, many wives, husbands, sons, daughters, moms, dads, brothers and sisters will look at an empty chair and long for memories of Thanksgivings past. That’s because their loved ones made the ultimate sacrifice in defense of our freedom.

Gold Star families – a sacred term that applies to those who have lost loved ones in war – have endured an extraordinary amount of pain in 2017. As if grieving their hero isn’t hard enough, much of this revered community watched in disbelief as the president, a congresswoman and the national media fanned the flames of a hideous, unnecessary feud involving a Gold Star family after four Americans were killed in Niger.

While that controversy’s damage can’t be undone, there is something all of us can do for Gold Star families during this Thanksgiving holiday. It’s simple: leave an empty seat at your dinner table for a fallen service member and say a prayer for his or her family. This gesture will help teach a powerful lesson to your children and grandchildren about American heroes who were willing to lay down their lives to protect others.

An Empty Seat for Michael Ollis

This year, my family will be leaving an empty seat at our table for U.S. Army Staff Sgt. Michael Ollis, who was killed in Afghanistan on Aug. 28, 2013, while saving the lives of a Polish soldier and several others. Staff Sgt. Ollis posthumously received the Silver Star for his selfless, gallant actions. After first writing about Michael in 2014, I finally had the privilege of meeting the American hero’s father, Bob, and sister, Kimberly, at a recent book signing event in New Jersey. Bob, who is himself a Vietnam veteran, stood up and delivered a powerful message to those in attendance about what it truly means to be a Gold Star family.

While there is most certainly pride and honor, Bob explained, the pain never goes away. He said that while every day is a struggle, the holidays are often the toughest time of year. One can only imagine all the Thanksgiving and Christmas memories that go through the collective minds of the Ollis family as they gather for the holidays each year in Staten Island, N.Y.

Yes, Veterans Day and Memorial Day are extremely important holidays that were rightfully created to honor a community of heroes. But as Bob Ollis’ poignant remarks demonstrated, Thanksgiving and Christmas might be an even more appropriate time to wrap our collective arms around Gold Star families, as well as loved ones of those presently in harm’s way.

Nearly 7,000 Americans did not return home from Afghanistan and Iraq after the terrorist attacks of 9/11. Many more came home wounded, physically and/or emotionally. The overall impact of these wars on military families cannot be measured, nor can the daily sacrifices of those who will spend the holidays worrying about family members still deployed to global hotspots, including the Korean Peninsula, which could erupt into violent chaos at any moment.

In 2017, dozens of families who lost loved ones in Afghanistan, Iraq, Syria, Yemen, Niger and in stateside training accidents are experiencing their first Thanksgiving and Christmas season without their beloved soldier, sailor, airman or Marine. While the pain they are experiencing is unimaginable, all of us have the power to ask God to help ease their suffering.

We also have the ability to make sure their loved ones aren’t forgotten. As my family leaves an open seat for Sgt. Michael Ollis, please do the same for a fallen hero in your home. Even if the Gold Star family never hears about your act of kindness, your efforts to keep their loved one’s memory alive still make a big difference, as do your prayers.

To quote the fine HBO movie Taking Chance, “without a witness, they just disappear.” This holiday season, let us all bear witness to the astonishing courage of a new generation of American heroes and their families. Nobody deserves our thanks more than them.

Tom Sileo is co-author of the new book 8 Seconds of Courage: A Soldier’s Story from Immigrant to the Medal of Honor. Follow him on Twitter @TSileo.