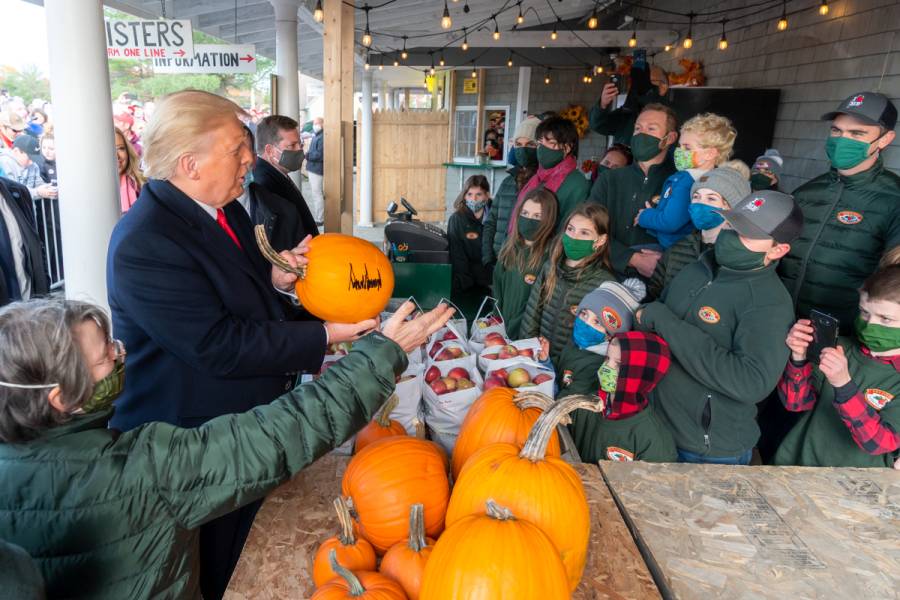 One was expanding the map. The other was extending his nap.

With nine days left before America decides its fate, Trump spent the day Sunday in New England. All Biden did was snap at a reporter for daring to ask about Hunter Biden controversies, and get confused about whom he is running against.

No honest person can watch this clip of Joe Biden calling Donald Trump “George,” and believe Biden capable of serving as our president. It is tragic. How tragic? Trump has a new humorous Halloween-themed ad ripping Biden called “How to Spot a Zombie.” Normally, it’d be very funny. It’s not so funny when you’ve seen this …

Biden, for reasons this video makes clear, doesn’t have any public appearances scheduled for the remainder of the race. Which itself should be a scandal. As we said yesterday, Biden and the media think voters are chumps. Not deserving of his effort or an explanation. Oddly, Kamala Harris is also not doing many appearances. Even when she does appear, she’s not sure where she is.  “Are we in Cleveland?” she asked her staff Saturday.

A hot mic caught Kamala Harris asking staff "are we in Cleveland?" before she spoke. pic.twitter.com/Fni0u5Xwgc

Trump, meanwhile, made an “off-the-record,” short notice stop at Treworgy Orchards in Levant, Maine. Somehow 4,000 people appeared. According to the last census, Levant has only 2,918 people.  The president spoke and signed pumpkins. “It’ll be up on eBay tonight,” he joked.

Barack Obama drew a few score Saturday to drive-in rally in Miami, city of 471,000. By contrast, a Latino car rally for Trump a few weeks back drew 30,000 vehicles.

The massive Miami car rally is hardly unusual. Trump supporters have been hosting rallies of all types coast-to-coast, including places where Republicans were thought to be an endangered species. Two particular events over the weekend are of particular note.

Here are some supporters near the famed Rodeo Drive. Notice the ethic and racial mix? Notice the fun. Be honest, Democrats: Is anyone having fun at any Biden rally?

Funny thing. When Trump supporters went through Beverly Hills, they didn’t smash any windows. Nobody shouted “Eat the rich!” Unlike last summer when those Antifa and BLM friends of Joe & Kamala stormed through with several protests.

If you remember the summer riots, those anarchists and socialists, also tore through the heavily Jewish area of L.A. called the Fairfax District. Shades of ’38 Germany.

I mention that because yesterday in New York City, thousands and thousands of “Jews for Trump” rallied for their candidate. And got pummeled with rocks, eggs, and paint.

Joe Biden blew a gasket yesterday when a reporter dared ask him to comment on the revelations about the Biden Family business operations. The reporter hadn’t even finished the question. “Questions, controversy continue today about Hunter Biden, your son’s —

“There is no controversy about my son,” Biden said (ridiculously), “It’s all a lie. It’s a flat lie because the president has nothing else to run on.”

What’s a lie, Joe? Which email is faked? Which text? (For that matter, which compromising video?) Was Hunter’s business partner Tony Bobulinksi lying about meeting with you about the China deal? Did you not meet with a Burisma executive, in direct contradiction of your previous statements? Where is Hunter’s statement that the documents are all forged? That there never was a $5 million no-interest forgivable loan from the Chinese that he funneled via a shell company to his law firm? Is it a lie that Hunter was paid $10 million a year for “introductions”?

The new line from the media is this: Joe Biden did not have any “role” in Hunter Biden’s dealings. Dubious, given the evidence. But even allowing that, this is a far cry from Joe Biden swearing he never even talked to his son or brothers about their foreign business dealings. See how they moved the goal posts on you?

And that’s just with the scandalous issues they are talking about.

Let’s talk media double standards. You remember how jolly the media was to run for months with the “salacious” details in the fake Steele dossier? With that in mind, here’s a quick Monday morning quiz. If foreign enemies filmed Don Jr. messing with a potentially under-aged hooker and the footage got released, do you think CNN would ignore it? (Especially given the national security implications of what else they might have that could be used to blackmail Trump?)

If a Democratic Senate candidate quoted her police sources as saying illicit photos of Eric involved the underage daughter of a Trump Senate ally, do you think MSNBC would ignore it? (I am not linking to the tweet because the Republican candidate got far too specific in identifying the alleged victim.)

If a new source that has broken bombshell stories about Republican politicians, published what it claims to confirm is Ivanka’s diary, suggesting sickening acts involving Trump, would our entire news media stay silent?  (Given the nature of the allegations, we’re not linking to that either, until or unless there is further confirmation the diary is legitimate.)

Of course not. All three happened Saturday within a matter of hours. Except with stories involving the Bidens. The Stream is not linking to the stories, or being more specific, because of their graphic and/or unsubstantiated allegations.

We only mention them at this point to address the hypocrisy of the media. The videos of the first story are actually out, in graphic detail. The second story has a Senate candidate calling out a major Democratic politician by name, a week out from the election. The third story has as much sourcing, if not better, than The Atlantic story that claimed Trump called our lost war dead “losers” and suckers.”

The difference is, the Atlantic story had dozens coming forward on the record to deny it.

Despite this, Joe Biden, again on Saturday, repeated the Atlantic’s slander.

Joe Biden is being protected. And from behind that wall he is lobbing clods of manure.

Laws of political karma being what they are, we wouldn’t want to be in Joe’s shoes when the walls are finally breached.

But let us not dwell on dark things.

Instead, Let Us Dance

As you no doubt know by now, Donald Trump has taken to dancing at the end of his rallies to “YMCA.” Former Acting Director of National Intelligence Richard Grenell says Trump told him “he can’t help but dance” to the disco classic. “He likes it.”

You can say Trump had a Saturday Night and Day Fever this weekend.

He took the Boogie Train to Ohio.

Finally, Trump shook off the cold in Wisconsin with some Badger Boogaloo.