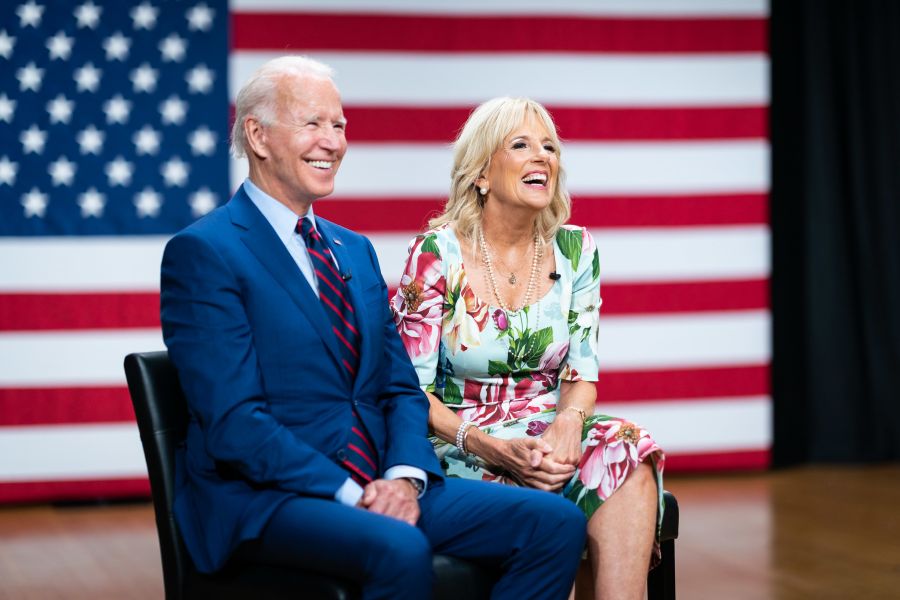 They're laughing at you. Not with you.

Joe Biden thinks you are a “chump.” Not just Trump supporters. Every American voter.

First, we go to Biden’s rally Saturday in Bucks County, Pa. Well, it was supposed to be a Biden rally, but more Trump supporters than Biden supporters showed up. And they were noisy.

Joe was not pleased. Like the crotchety old guy down the street who calls the police if your football pass lands in his yard, Biden lost it.  “Chumps,” he called the voters on the other guy’s team.

Actually, he did it twice.

And the hashtag #ChumpforTrump was born. Indeed, our first instinct is to laugh and embrace the label. Deplorables 2.0.

Less funny is what we learned from Thursday’s debate. And from the evidence that Joe has been lying about his involvement in his son’s business dealings. We know now that Joe Biden was “the big guy” insisting on his cut, “the chairman” who consults and signs off on all Hunter’s seamy foreign influence deals. Joe knows the proof is out there now. But he doesn’t worry. Because he thinks a majority of American voters are chumps.

Let’s look at some examples from just the past 72 hours:

The string of astounding falsehoods goes on and on. “Who are you gonna believe — me, or your own damned eyes?” That’s a line from a Marx Brothers movie. A line Groucho uses on … a chump.

These Chumps Will Accept Its Just Russia Fiction

Biden thinks you voters are chumps when it comes to the Biden Family Scandals. He thinks you’ll just stumble ahead and zombie-like pull his lever DESPITE:

Joe Biden stood on that stage Thursday night, and declared that he and his son were pure as the driven snow and everything being talked about had been concocted by the Russians.  The Russians.

He thinks you chumps are dumb enough to believe it. He thinks your Trump Derangement Syndrome has so infected your brain that you’ll simply nod along, slack-jawed. That you simply do not care that he lied through his teeth, and has made a fortune parlaying his positions into vast wealth for his family. That it’s okay with you that he has been so thoroughly compromised by the Chinese that he is a risk to national security.

His Campaign Thinks You’re a Chump, Too!

His campaign thinks you’re a chump, too. In a statement, they say:

Joe Biden has never even considered being involved in business with his family, nor in any overseas business whatsoever. He has never held stock in any such business arrangements nor has any family member or any other person ever held stock for him.

Notice this different than Joe’s denial. He said that he’d never even talked business with his son or brothers. But notice also the wordplay. Nobody’s talking about him owning legal “stock.” (That’s for above-board businesses.) They’re saying he had a “stake.” He got a cut.

When campaigns get cute with words it’s because they think you aren’t as clever as they are. They think you’re a chump.

The Media Helps Biden Keep the Truth From Us Chumps

There’s a good reason for Biden’s arrogance. He knows his pals in the media will protect him at all costs. NPR, as we reported last week, calls the Biden Inc stories broken by the The New York Post’s “distractions.”  Won’t report on it at all. Aren’t even bothered that the nation’s oldest paper has been blocked on Twitter.

Liberal journalist Piers Morgan called out the media for its failure to address the allegations from Biden family business partner Tony Bobolinski and the evidence on Hunter’s laptop. He said they are ignoring the story because the revelations might cost Democrats the election.

His reward? Having a long-scheduled appearance on CNN’s Reliable Sources today suddenly cancelled. That is Brian Setzer’s show, supposedly about the news media. Piers Morgan, a former CNN host, must be a chump too, right, Brian?

Greg Greenwald caught a perfect example in a Washington Post editorial: “We must treat the Hunter Biden leaks as if they were a foreign intelligence operation — even if they probably aren’t.”

One of the clearest and most important sentences you'll read, showing how US media really works, from WashPost op-ed by @RidT:

** "We must treat the Hunter Biden leaks as if they were a foreign intelligence operation — even if they probably aren't." **https://t.co/T7LUOvorlI

That from the newspaper whose greatest claim to fame is uncovering the Watergate scandal.

Here’s the Good News: Americans are Not Chumps

On Saturday, Joe Biden called Americans “chumps.” In nine days, Americans — red, purple and even blue — will show him to the dumps.