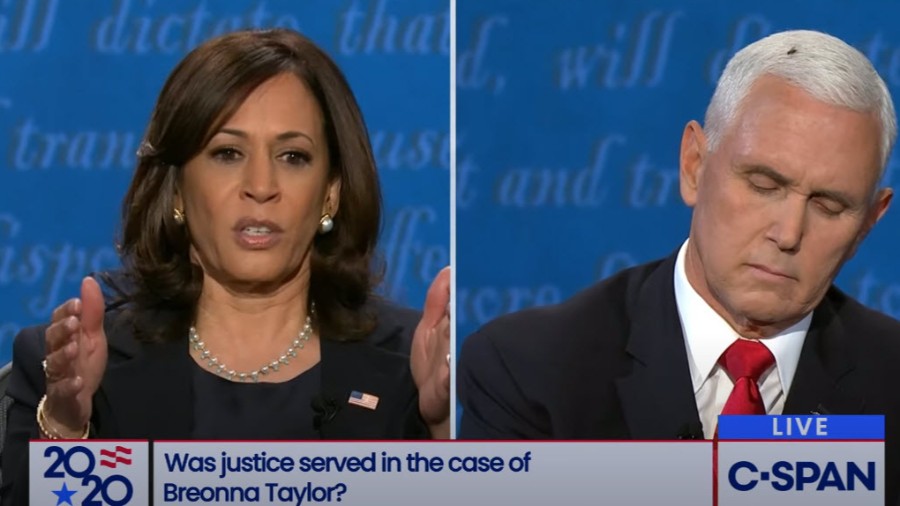 Thank you, oh, fly that landed on Mike Pence during last night’s debate, for giving us one of those moments that remind us that American politics is supposed to be fun. That one can be Vice President of the United States, and still only be a landing pad for one of God’s little creatures.

Yet, our little fly friend also was a political Rorschach Test. A black dot on a white field. (Mike Pence’s hair.) What did you see? Most saw a fly. A humorous moment. Some attributed Mike Pence’s non-reaction to his unshakable mellow demeanor and intense focus at the task at hand. David Frum at the increasingly ridiculous The Atlantic saw something more … sinister.

We saw a weird moment when a fly landed on Pence’s snow-white hair—and the vice president did not react at all. No doubt, it’s a conundrum, what to do in such a situation. If Pence had shooed the fly and the fly had refused to shoo, that would have been bad. So he did nothing. And that doing nothing somehow in one powerful visual moment concentrated everything. It symbolized the whole Pence vice presidency, the determined, willful refusal to acknowledge the most blaring and glaring negative realities. Through all of the scandals and the crimes and the disasters of the past four years, Mike Pence was the man who pretended not to notice. And now there was a fly on his head, and he pretended not to notice that too.

Our Tom Gilson had a brilliant response, likening Frum to the hapless and pompous news anchor on The Mary Tyler Moore Show:

That is, there’s no way to read this aloud without slipping into Ted Baxter voice, and no way to take it any more seriously than we took Ted Baxter. https://t.co/cBhL7JF98N pic.twitter.com/PgHKGLfIax

Come to think of it, Tom, hapless and pompous describes most every MSM news anchor. They are like Ted Baxter … without the loveability. But I digress.

You Know Kamala Lost When …

The fact so much attention is going to the fly is just one sign of how Kamala Harris’ night went.

You know your candidate lost when …

Most of all, you know Kamala Harris got taken to the cleaners by Mike Pence when the memo goes wide to accuse Mike Pence of “mansplaining.” Commentator Mike Cernovich quickly picked up what the media narrative was going to be. He tweeted, “All the media shows are saying the debate was unfair because Kamala is a woman, that’s it, that’s all they got.”

CNN’s Van Jones did it, calling Pence the “Mansplainer in Chief.” ABC’s George Stephanapoulos did too.

Thank you, thank you, thank you, Martha Raddatz for pointing out to George and friends the ridiculousness of it. The veteran ABC News reporter said, “When I hear people talk about mansplaining and about these things with Kamala Harris, and a man shouldn’t interrupt her, and it’s going to look bad, Kamala Harris is a vice presidential candidate. She should be able to stand up for herself.” Added Raddatz, “A man can interrupt another vice presidential candidate. It is up to that candidate to talk back.”

Megyn Kelly also didn’t give Harris a pass because of her sex. “Take it like a woman,” she tweeted. “Don’t make faces.”

Kelly was onto something. Pollster Frank Luntz watched the debate with undecided voters. Real undecided voters. Not the NBC “I know they were just on MSNBC saying how much they love Joe Biden, but we’re going to pretend they are” undecided voters. Luntz’s says “Harris’s reactions to Pence — the smiling, the smirking, the scowling” left them angry. The undecided voters found Harris “abrasive, condescending.” Pence, they found, was “tired,” but presidential.

“It was clear, said Luntz, “that Mike Pence was the winner of tonight’s confrontation.”

This was also reflected in a Telemundo poll. Their poll had Pence crushing Harris by 74% to 26%. Apparently, Telemundo didn’t like how bad it was looking for Harris, so they took down the poll. (Thank you, Gateway Pundit, for catching it.) 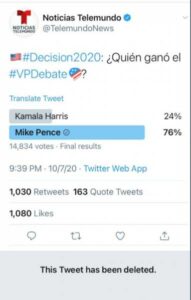 There is some good news for Harris. Communist China enjoyed what she had to say. China censored Pence when he was talking about China, dropping the feed and going to color bars. But they picked right up when Harris resumed talking. The Communist Party there knows what side its bread is buttered in this election. The side that includes the man whose family it enriched by $1.5 billion.

Taking one from the Chinese playbook, ABC News only fact-checked Pence. They did not fact-check Harris at all. Given the laundry list of lies Harris spun, this is shameless.

One final debate tidbit. Did it seem to you Mike Pence did more talking? That was an illusion. Rick Klein of ABC News determined Harris got nearly 3 1/2 minutes more speaking time. (38:48 minutes versus 35:22 minutes.) So whence came the idea Pence talked more? Paul Sperry offers a clue. Moderator Susan Page generally let Harris finish what she was saying. But for Mike Pence, she tried cutting him off right at the two minute marker. Every time.

Moderator Susan Page — who's under contract writing Nancy Pelosi's book — let Kamala run well past her 2 minute allotment but cut Pence off right at 2 minutes EVERY TIME. And virtually every one of Page's questions had an anti-Trump slant & not one of them was critical of Biden

Trump Holding a Virtual Rally With Rush … Is He Going to Bend on Not Doing Virtual Debate?

President Trump is going to be hosting a virtual rally on The Rush Limbaugh Show Friday. Expect that to be epic.

Meanwhile, Trump rejected the Council on Presidential Debates’ sudden switch to a virtual format for next week’s second debate. But there is some hint or hope that his firm rejection is a negotiating ploy. Indeed, the Trump campaign suggested pushing the next two debates back a week. Biden rejected it. Biden flat out does not want more than one showdown with Trump. Cowardice, from the guy who once said he wanted to take Trump out back and beat him up.

One idea floated by James Freeman of The Wall Street Journal and promoted by Kimberly Strassel is “Fine. Have the Virtual Debate. But No Moderator.”

3) If CPD is going to throw out the rules at this late stage, let's throw out the moderated format too. Let the American people hear both candidates speak to them and to each other for 90 minutes, equal time, equal footing.

Meanwhile, Nancy Pelosi must not believe the polls showing Biden winning. She said Thursday, “We’re going to be talking about (invoking) the 25th Amendment” to remove Trump for health reasons. You don’t do that to someone you fully expect to beat.