When he challenged the UN to support religious liberty 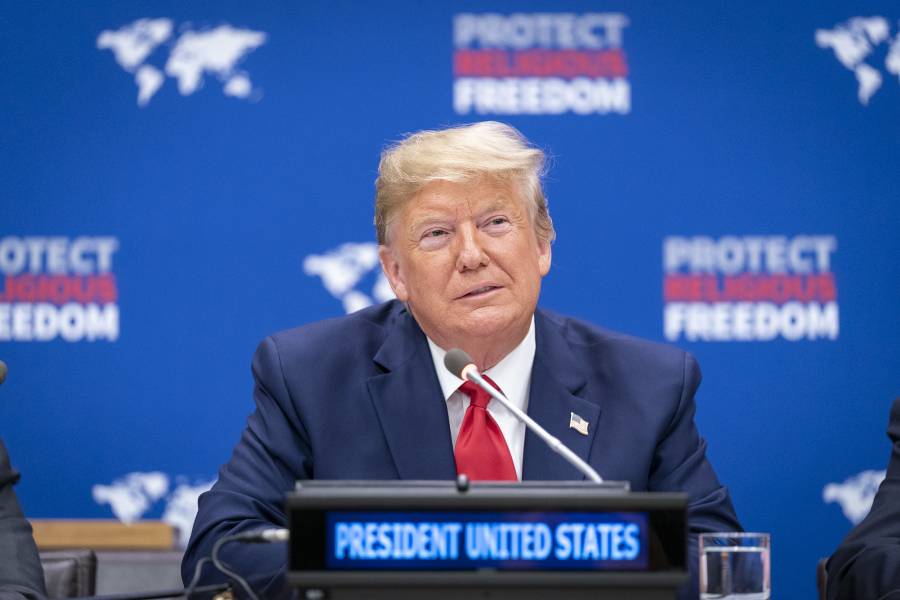 By Rob Schwarzwalder Published on September 26, 2019 •

“That’s very sad, in many ways.” That’s the President speaking to world leaders at the United Nations’ first ever summit on international religious liberty. He was shocked to learn it was the UN’s first-ever such event.

“The United States,” he explained, “is founded on the principle that our rights do not come from government; they come from God. This immortal truth is proclaimed in our Declaration of Independence. … Our Founders understood that no right is more fundamental to a peaceful, prosperous, and virtuous society than the right to follow one’s religious convictions.”

We can be grateful that an American President had the courage to say this not only to the many brutal regimes represented in the UN assembly hall. But also to Americans who believe our rights come from the government. Or the majority of voters.

And who think, if we lose religious liberty, is it really a big deal?

Yeah, it is. Religious liberty is about the ability to live-out one’s faith in the day-to-day. It involves not just private but also public actions and speech. From it flow the rights of assembly, speech, and press, to keep and bear arms, and so forth.

Our duty to our Creator outweighs duty to anyone else, including the state. Our obligation is not just to worship Him on occasion, but to live and speak as He commands all day, every day. If our main duty isn’t to Him, then what is it to? The government? That’s a terrifying thought.

In our country, a growing number of Americans have been penalized for refusing to surrender their faith. Consider Baronelle Stutzman, an elderly Christian grandmother who runs a florist shop in rural Washington State. Several years ago, she refused to create floral arrangements to celebrate the wedding of two men. Since then, the state of Washington and the ACLU have brought her to court several times. The Alliance Defending Freedom has now petitioned the Supreme Court to hear her case.

This is but one example of many. Cakebakers and pharmacists, professors and sheriffs, even nurses, all attacked because they will not bend the knee to the Baal of a hostile culture. Thankfully, unlike his predecessor, Trump has defended domestic religious liberty strongly.

The Rest of the World

But things are much worse in other places throughout the world. “As we speak,” the president said, “Jews, Christians, Muslims, Buddhists, Hindus, Sikhs, Yazidis, and many other people of faith are being jailed, sanctioned, tortured, and even murdered, often at the hands of their own government, simply for expressing their deeply held religious beliefs.”

Just this week, a medical student in Alexandria, Egypt was attacked with bricks as she left a church. Not only was Marina Sami Rageb proclaiming her Christian faith by attending church, she was not wearing a headscarf. For this, her attackers fractured her skull. Her brain is bleeding.

Last year, half a world away in India, five Christian women who were sharing the Gospel through in their performance of a street play were suddenly abducted. Dragged into a local forest, they were gang raped. Police reports say these horrors were captured on cell phones.

The Whisper of the Martyrs

My friend Jeff King has long been a brave champion for the persecuted. In his profound book, Last Words of the Martyrs, he writes, “As I served the persecuted and became more familiar with the martyrs, I felt that they were each leaning over and whispering a message in my ear.”

That message? In suffering for their Savior, the persecuted found Him closer than ever.

Will we American Christians stand with them? Will we do as the writer of Hebrews tells us? “Remember those who are in prison, as though in prison with them, and those who are mistreated, since you also are in the body” (13:3).

A good place to begin is to read the President’s speech. There you will get a brief but solid overview of what’s happening. You can also read the State Department’s recent report and visit Open Doors to learn more and find out what you can do to help.

“We ask the governments of the world to honor the eternal right of every person to follow their conscience (and) live by their faith,” the president concluded. Amen, Mr. President. Amen.