Donald Trump Is Each of Us: A Farm-Raised Salmon Forced to Swim Upstream or Die 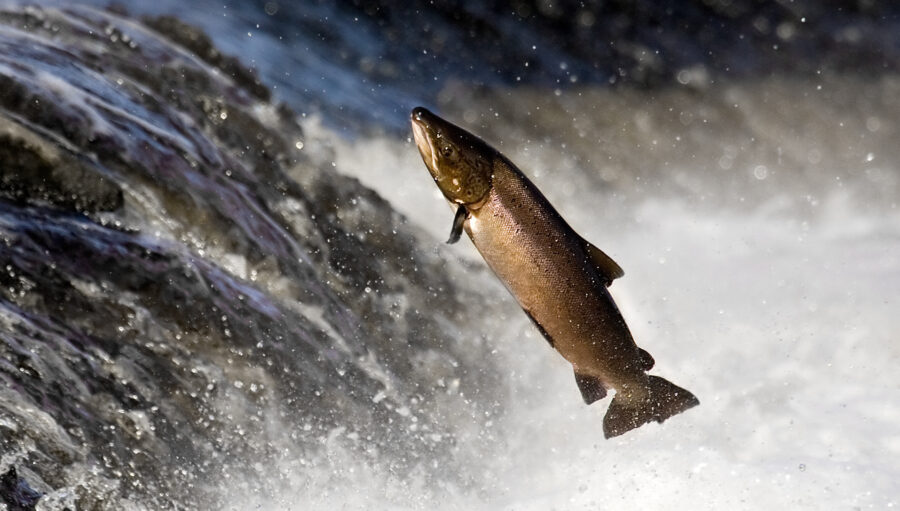 I was excited to watch Donald Trump’s speech at the America First Policy Institute, in part because I honestly haven’t heard him speak in months. While he was still in the White House, that became a regular treat. Because Trump doesn’t speak like ordinary politicians.

He speaks like my dad. (A blunt letter-carrier, like Trump from Queens.) Like most people’s dads, unless you’re a blue-blood. And that was always refreshing, especially compared to other politicians:

Calling a Sicko a “Sicko”

It’s incredibly refreshing to hear a man in politics call a sicko a “sicko.” Instead of muttering something about the “Minor-Attracted People community.”

So often, Trump’s statements sound like the innocent young boy in Hans Christian Anderson’s fable, “The Emperor’s New Clothes,” who blurts out naively: “But he’s completely naked!” The boy hadn’t heard what everyone else had: that only wise and sophisticated people could even see the emperor’s fabulous new outfit. So the kid called it as he saw it. He didn’t worry what anyone thought of him. And that’s perhaps Trump’s strongest virtue. Who else in public life could have endured such unhinged vilification, and not just gone away to hide? (Below, his speech starts around 8:06:00.)

Trump’s speech theme was simple. “Do you remember life with me in office?” Gas was a normal price. Our borders were actually guarded. Tens of billions of dollars in U.S. military equipment were in the hands of U.S. servicemen, not of the Taliban. There were no sad-sack transvestites, “human puppy” fetishists, or other public freaks in the White House. The government wasn’t imprisoning political dissidents, seizing our legal guns, promoting the castration of children, or trying to destroy the energy industry. Nobody in government started out meetings giving his “pronouns.”

Donald Trump is not a principled conservative who has thought all our problems out. He’s a normal guy who wants to live in a normal country. For that alone, he’d deserve to crush whatever sock puppet the Democrats nominate in 2024, to replace the Former Joe Biden.

A Time for Angry, Edgy, Right Wing Zealots to Govern

But if Trump wants to do more than win an election, if he wants to actually restore some measure of normalcy, he’s going to have to go way beyond what’s “normal.” Because we Americans are no longer fat, happy salmon floating around in a fish farm, nibbling grain. Some lunatics blew up the dam, and now we’re stuck in a river, floating downstream toward our doom.

Mellowly staying stationary is no longer an option. We must swim ferociously upstream, just to stay in place, much less make any progress. Our slack, lazy flesh now has to generate all those Omega-3s that make wild salmon meat healthy eating.

If Trump wants to do more than reenact his four years of serving as our Oligarchy’s pinata, he will have to go out of his comfort zone. He will have to find and hire principled, edgy conservatives — not slick, opportunist Republican hacks such as filled his first administration.

Pardon the J6 Dissidents, Then Hire Them

Trump’s angry about what U.S. elites did to him? He needs to find angrier people, enraged about what the demon-possessed, baby-killing, child-grooming, infant vaxxing left is doing to our country. To make America safe for ordinary people, he must seek out extraordinary citizens, the kind of people all too often left hung out to dry in the past.

Trump needs to fill his staff and his administration with people like Stephen Miller, Steve Bannon, Pedro Gonzalez, Christopher Rufo, Julie Kelly, Darren Beattie, and Peter Navarro. In fact, I’ll go further. On his first day in office Trump should not just pardon the peaceful political prisoners of January 6. He should hire them, or help them run for Congress. They are the most qualified people in America, because they more than anyone know the evil we’re dealing with.

This isn’t like the Cold War, where we just had to hold our ground until Marxist economics finally ground to a sputtering halt. We face a powerful, evangelical, demonic cult of hatred for everything normal and decent, for God, and hence for mankind. We need an army of exorcists.

I pray that Trump can be made to realize that. Maybe the fact that Biden’s DoJ is trying to put him in prison for questioning the 2020 election will do the trick.