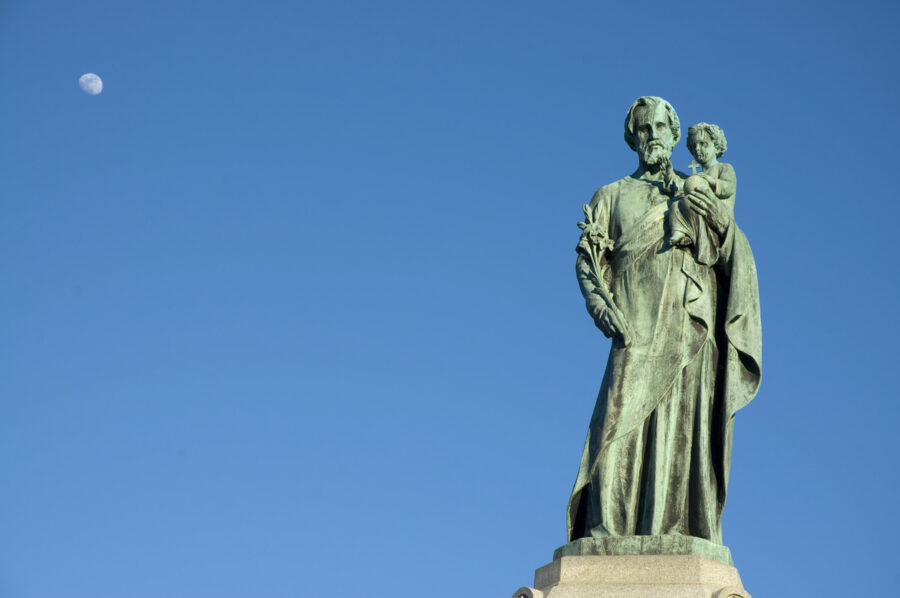 In July 2005, my father went away, leaving my life with a dad-shaped hole that nothing will ever fill. Only the preceding Christmas, the stomach cancer he’d been battling for a year had seemed to be in remission after surgery and chemotherapy, and for some months he was eating again — tiny portions because the surgery had left him with only a tiny, fist-sized stomach. He’d slimmed down from the big, burly, Santa Claus-sized dad I’d always known, and for the first time I could remember we both wore the same pants size.

The treatment won him nine months of health, time for dancing again at the senior center with the woman he’d married after Mom died in 1996, for a few hundred more tiny meals, and for starting a bunch of household projects which he would not live to finish. By Easter 2005 he had lost all appetite and couldn’t join the rest of us for supper. We convinced ourselves that this was just the after-effect of surgery and tried to find him food that he could keep down, but all through the spring we watched him fade away. By summer it was clear to everyone but him. He spent his last Father’s Day at the old Astoria General Hospital in Queens, the same hospital where I was born.

They say that a father’s example is decisive in most men’s lives — and this is nowhere more true than in the spiritual life. A devout mother can usually pass along her faith to daughters intact, whether or not her husband is a believer. But for some deep psychic reason, most boys need to see their mothers’ faith affirmed and practiced by their fathers, or they will lose it. I’ve seen this phenomenon at work in my own family. My sisters married non-believers — and their own daughters still go to church but not their sons, who mimic their fathers’ wry skepticism and chuckle as “the girls” trot off to Mass.

Faith of Our Fathers

I was blessed with a father who set a different example. Whenever he would wake me up with the sun on a weekend morning, I knew it was for one of two reasons: to go fishing or to the Holy Name Society Mass on the second Sunday of every month. This was an all-male affair for which the grocers, barbers, and other men in our working-class neighborhood dressed up in suits to honor the Mystery that drove them to their knees. We’d usually end the Mass by belting out this hymn:

Faith of our fathers, holy faith,
We will be true to thee till death.

Then we’d troop down to the church basement to eat cheese Danishes, and drink coffee with milk but no sugar (I still think of it as “Holy Name Society coffee”), and organize our good works for the parish. My favorite task was the Christmas crèche. Together we’d hammer and saw and strew pine boughs, putting together the crib that would hold the Holy Family through the Advent and Christmas seasons. Of course, the baby Jesus was never placed in the crèche until Christmas Eve — and my father explained to me why: “It teaches us how to wait.”

My father grew up during the Great Depression, the son of Croatian immigrants. My grandfather came from a family of fishermen and had earned his U.S. citizenship by joining the Merchant Marines during World War I. My grandmother emigrated to America as a child and grew up on a houseboat on the Hudson River. She came down with Parkinson’s disease when my father was 10. As she grew progressively weaker, Dad would walk her slowly down the street to the movies or push her wheelchair through Hell’s Kitchen, where he grew up. Eventually, he had to bathe her — and his little brother too. This must have been where he learned (too young) how to nurture the weak.

Most boys need to see their mothers’ faith affirmed and practiced by their fathers, or they will lose it.

When Dad returned from World War II (where he’d served under General Patton in occupied Germany), he learned that Uncle Sam was offering him a free college education under the G.I. Bill. He’d dreamt of becoming a commercial artist—for which he had the talent—and college could give him the training. But my grandfather urged him to take a “safe” job, the kind that hadn’t gone away during the Depression, and my mother was waiting to marry him. So Dad got a job at the Post Office. There he worked for 37 years, hauling mail on his back (no carts back then) through “rain and snow and gloom of night.” He was gone before I woke up in the morning and returned each day to Queens to fall asleep while watching the “4:30 Movie” in the afternoon.

The Mailman to Carnegie Hall

By happy chance, his route included Carnegie Hall — where he took me on a tour. It was my first trip into Manhattan, and I still feel a twinge when I enter the neighborhood where dad was once a daily fixture. They used to call him “the happy mailman” (not that he lacked a temper, of course). When I showed an interest in classical music, he asked the managers at Carnegie for tickets. I was 12 when he took me to hear Martina Arroyo. When he started to snore during her evening concert, I got annoyed. I’d forgotten that he’d gotten up for work at 5:00 that morning. He didn’t remind me.

He and my mother found me a little puzzling — I was more bookish and talkative than most other kids in the neighborhood. “We didn’t know what to do with you,” he confessed to me not long before his final illness. But even though Dad didn’t quite get why I preferred reading to fixing cars or playing baseball, he started bringing home books for me.

He and my mother found me a little puzzling — I was more bookish and talkative than most other kids in the neighborhood. “We didn’t know what to do with you,” he confessed to me not long before his final illness. But even though Dad didn’t quite get why I preferred reading to fixing cars or playing baseball, he started bringing home books for me. I devoured each one, and I started scribbling stories myself, which he’d always patiently read — though sometimes he’d scold me for using “unnecessary big words.”

Decades later, when my first book came out, dedicated to him, he read that, too. Wilhelm Röpke: Swiss Localist, Global Economist was probably the first book on social philosophy he’d ever opened. “I loved it,” he said in his potent Archie Bunker-style accent. “But I’m not sure I understood it.”

And I guess that’s how I feel about Dad. Looking back on the choices he made — on the opportunities he missed, the backbreaking work hauling mail day in and day out — I can’t help but think that he lived in a different world from me. His talents went undeveloped, and his rough edges never got smoothed. But Dad was always there. You could always trust him. Every day, healthy or sick, he went to work. Every Sunday he was kneeling at Mass as an example for me. I always felt safe knowing that Dad was in the neighborhood (I moved next door, and I still live on my old block), long after he was too sick to lift a finger for me and I was too old to need it. His presence, his uncomplicated solidness, helped me imagine the loving Father who is behind the veil of creation. And it helps me even today — though Dad slipped behind that veil, 13 years ago.

This column originally appeared at Beliefnet in 2006.

Knowing God as a Forgiving Father