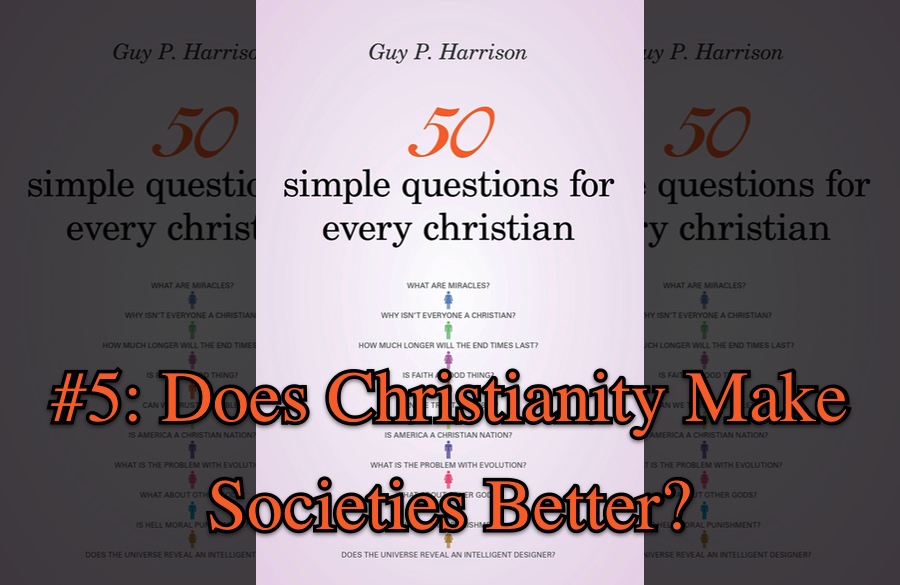 Does Christianity make societies better? Guy Harrison compares nations around the world, and states within America, and concludes that “What is clear … is that the current state of the world’s countries strongly refutes the popular claim that Christianity is a good and necessary ingredient” to helping or hindering societies.

I’m sorry, but what it really shows is that Harrison doesn’t know enough to assess the facts accurately.

Harrison’s evidence can’t do that. (The same goes for his additional data comparing U.S. states with each other.) There are too many other factors he’s left out of the equation, including three of the most obvious.

Three Obvious Problems With His Answers

Vishal Mangalwadi, who grew up in India but lives in America now, speaks of the Bible as “the book that made your world.” His excellent book of that name tells of clear differences Christianity has made in the West. Implied in there, though, is the idea of world-making. It takes a long time to make a world, and a long time to unmake it. Harrison seems blind to that.

Harrison’s “refutation” gives us nothing except another lesson in how easy it is to abuse statistics to “prove” a point.

Second, the U.N.’s measures are limited (and frankly quite Western-centric). They omit important factors such as mental health and the quality of human relationships.

Third, Harrison makes the mistake of comparing one country with another, rather than asking the more important question, “Are countries better off having Christian influence than they would be without it?” Matthew Parris, an atheist, wrote in 2008, “I truly believe Africa needs God,” and detailed multiple ways Christianity has helped the continent.

And Another Problem to Boot

Fourth — though less obviously — Harrison’s whole approach commits an error called the ecological fallacy. Unfortunately, not only is this one of the lesser-known fallacies, it’s also one of the harder to explain. (It doesn’t help that it has nothing to do with ecology in nature.) Wikipedia’s article on it has a helpful example, though: Do wealthier people vote more Republican than Democratic? Sure. Five out of eight voters earning more than $200,000 voted for George W. Bush in 2004, while only 36 percent with incomes of $15,000 or less voted for him. But his Democratic opponent, John Kerry, won 9 of the country’s wealthiest states!

Do we have any proper research showing that Christianity does a people good? Yes, of course we do!

How do you explain that? Doesn’t that second piece of information tell you rich people vote Democratic? Wikipedia goes on to explain what’s going on there, and how that’s possible. The point we need to catch is that aggregating people into groups, like the population of the states or countries they live in, can give you the wrong picture of their lives and decisions as individuals. Harrison draws his conclusions based on a fallacious method.

Answering With a Real Answer Instead

In fact, the first three reasons above show that he’s using faulty research methods altogether. You could put it this way: He asked, Does Christianity benefit societies? He set out to tell us the answer was no, but instead he gave us no answer, none that stands up to any kind of analysis. Harrison’s “refutation” gives us nothing except another lesson in how easy it is to abuse statistics to “prove” a point.

But it raises a question: Do we have any proper research showing that Christianity does a people good? Yes, of course we do! Fifteen years ago Christian Smith and Melanie Lundquist Denton published a gold-standard study of “the religious and spiritual lives of American teenagers.” In it they measured teens on their level of devotion to a religion (mostly Christian) and how they were doing on 99 different measures of physical, emotional, educational, and relational health. The more religiously devoted teens came out healthier on every one of the 99 measures. Every. Single. One.

Study after study — so many, it’s irrefutable — shows that religious belief is positively associated with better mental and physical health.

Christianity’s effects may be indirect, for example, the relation between Christianity and poverty. More and more these days, Christianity is connected with strong support for man-woman, “traditional” marriage. You may have heard rumors that Christians divorce just as often as non-believers, but that’s a myth. Regular church-goers divorce 27 percent less often than those who attend less frequently. And families with married parents (man and woman) are far less likely to be in poverty than unmarried persons.

Does Christianity make societies better? Ask the question the proper way — with proper research methods — and the answer is definitely yes.