Dems Lose Their Minds in Last-Ditch Bullying of Sinema 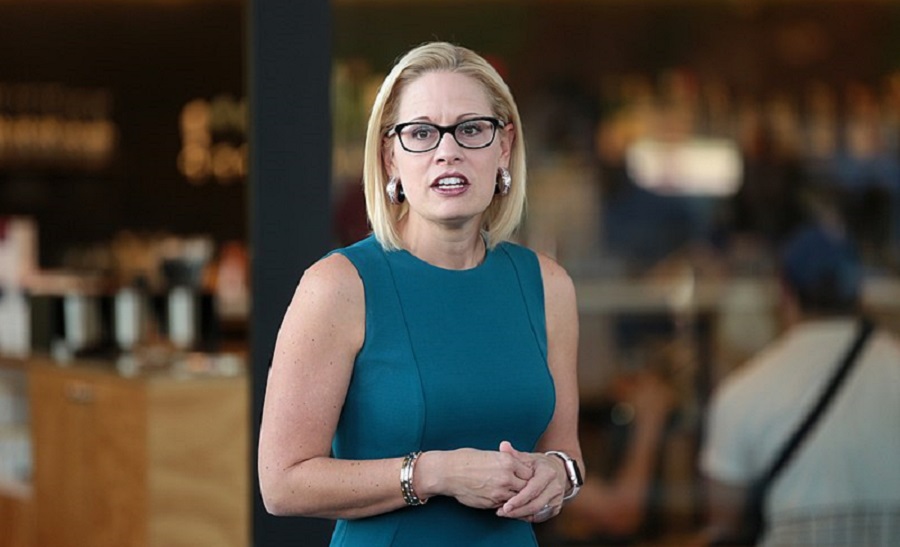 The confirmation hearings for Justice Brett Kavanaugh in 2018 took Democrats to a new low for childish, irresponsible behavior, but the current harassment of their fellow Democrat Sen. Kyrsten Sinema of Arizona is showing them to be full-out wacko. I’m not sure it’s possible to be any more wacko than they are at this point, but the year isn’t over and we shall see.

Harassment of Sen. Flake and Sen. Sinema — and the Link Between the Two

Speaking of Kavanaugh, there happens to be a link between the harassment of then-Sen. Jeff Flake — also from Arizona — over his vote to confirm Kavanaugh, and that of Sen. Sinema now, over the insane spending bills currently on the table. As reported by Jordan Davidson at TheFederalist.com, both of these agitator groups were funded by the same organization, which in turn gets money from George Soros.

Recall that Sen. Flake, after he announced that he’d be supporting Kavanaugh’s nomination, was ambushed in an elevator in the U.S. Capitol by two extremely confrontational women, one of whom offered a frenzied condemnation of Kavanaugh based mostly, it seemed, on what had happened to her personally and to other victims of assault.

A week after that incident, an email from the Center for Popular Democracy took credit for it, along with “the Women’s March and other groups.”

The Ambush of Sen. Sinema

Fast-forward to 2021, and a group called Living United for Change in Arizona (LUCHA) has taken credit for the ambush, complete with video cameras, of Sen. Sinema in a women’s restroom at Arizona State University, where she was on a break from teaching a class. It turns out that this group is a close partner of the Center for Popular Democracy. The report in TheFederalist.com gives details on the funding for both, but I’ll just say that leftist-globalist billionaire and would-be Bond villain George Soros funded LUCHA to the tune of at least $250,000 in 2017 and at least $1.5 million in 2019, and is the group’s largest donor.

I don’t know what these protesters think they’re getting for behaving this way. Do they think this relentless bullying is persuasive? Sadly, in some cases it has been, but by now the strategy has been used so much that, for many, it’s just getting tiresome. In a statement, Sinema said this was not a legitimate protest. “It is unacceptable,” she said, for activist organizations to instruct their members to jeopardize themselves by engaging in unlawful activities such as gaining entry to closed university buildings, disrupting learning environments, and filming students in a restroom.”

But these people on the left aren’t just bullies — they’re highly organized bullies, and the more we find out about their network of “nonprofit” organizations, the more we see that at the center of the massive spider web is the same little group of poisonous spiders.

So, what about those who use social media to encourage agitators to bully lawmakers? As “Sister Toldja” at Redstate.com reports, so-called “feminists” are doing exactly this to other women. For example, Jezebel.com writer Ashley Reese used Twitter to distribute a piece originally headlined “Absolutely Bully Kyrsten Sinema Outside Her Bathroom Stall.” The piece mocks those who would hesitate to follow a woman into a restroom with their video cameras. It serves Sinema right, Reese says, for hiding from the voters “like a coward.” Oh, and she adds that President Biden was right to dismiss what was done to the senator as just “part of the process.”

Twitter’s own rules state: “We prohibit behavior that encourages others to harass or target specific individuals or groups with abusive behavior.” Texas Rep. Dan Crenshaw called out Twitter on this, asking “Hey, just wondering if you’re going to enforce this bullying rule? Or does it not count when the victim isn’t liberal enough?”

I wonder how Ms. Reese would react if some male conservatives followed her into the women’s restroom and made videos while verbally harassing her. I would imagine she’d press charges, with good reason. But it’s not likely we’ll ever find out what she’d do, because no real conservative I know would ever do a thing like that.

Matt Vespa at Townhall.com noticed the same thing about so-called “feminists” who think it’s bad to bully women but gladly make an exception for Sen. Sinema. He wrote about the Jezebel.com piece as well.

“For all the pearl-clutching,” Reese had written of the restroom incident, “few are providing a more effective and safe alternative to what these activists did.” But Vespa says it’s not effective, because Sinema doesn’t care; they apparently can yell in her face all day and she’d just walk away before she’d “kowtow.” Good for her.

And what about the media double standard? When Sen. John McCain went against his party and stopped the effort to repeal Obamacare, The New York Times knelt to worship him. “It was a stunning moment,” they wrote, “a flash of the maverick John McCain, unafraid of going his own way despite the pleas of his fellow Republicans.”

But for going HER own way despite the continuing harassment from her fellow Democrats, Sinema is vilified in the media. As Byron York points out in Townhall, this time, the NYT ran a story headlined “What’s Wrong With Kyrsten Sinema?” Here’s a gem that ran in The Nation: “How Kyrsten Sinema Sold Out; the origin story of the Senate’s newest super villain.”

York cites the portrayal of Sinema on Saturday Night Live, which he says “often functions as a sort of in-kind campaign contribution to the Democratic Party.” (As do most of the media, I would add.) On SNL, she’s played as “a weirdo who just wants to do bad things,” he says. If you (like us) rarely see SNL any more because it’s just not funny, York includes a description of the sketch.

Steven Kruiser at Pjmedia.com has an explanation for the Democrats’ bizarre bullying behavior: “What we are witnessing now from the Democrats is a very public and ongoing nervous breakdown brought on by too many years of lying to the American people and themselves. Public incivility towards anyone who disagrees with them is not only forgiven but encouraged, even by the President.”

I can’t outdo his description of CNN, which he says was once actually respected but is now “a human zoo packed with frothing, rabid sycophants who were so damaged by Trump’s defeat of Hillary Clinton that they’ve lost all of their humanity.” And more: “What we are witnessing with the 2021 Democrats is a collective mass delusion that presents itself as a psychotic break with reality.”

I don’t think that’s too harsh a diagnosis; that’s exactly what we’re seeing. And I’d add that it’s not just the media — it happened within the government, inside the Justice Department, State Department, FBI, CIA. Trump’s election (or even just the threat of it), in their fevered minds, excused anything they wanted to do. And we’re still finding out what that encompassed.