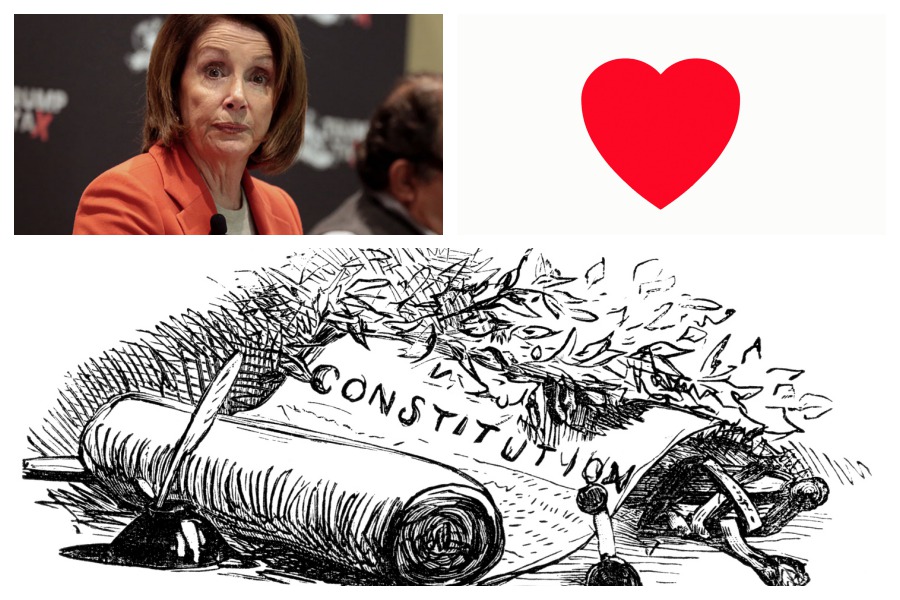 Oh, how Democrats love the Constitution! Donald Trump’s actions are “villainous to the Constitution,” declares Nancy Pelosi. House Judiciary Committee chairman Jerry Nadler accuses Trump of “high crimes and misdemeanors” (see Article 2, Section 4 of the Constitution). Democrat Jackie Spier of California says, “This is not a polling point. This is about the Constitution.”

This is endearing. The Democrats’ new-found love of the Constitution, I mean. They don’t really love it.

How about the Supreme Court’s ruling on same-sex marriage? Pelosi said it was “unequivocal.”  This means it can’t be disputed.

The decision was 5-4. As then-Justice Antonin Scalia wrote in his dissent, Anthony Kennedy’s “decree says that my Ruler, and the Ruler of 320 million Americans coast-to-coast, is a majority of the nine lawyers on the Supreme Court.” He continued that Justice Kennedy’s opinion was “lacking even a thin veneer of law” and was “a naked judicial claim to legislative — indeed, super-legislative — power.”

Yep. Sounds “unequivocal” to me.

Then there’s Pelosi’s retort to a reporter about whether or not Obamacare was constitutional. “Are you serious? Are you serious?”  Yes, he was. She wasn’t, though. At least about the Constitution.

As to Speier, she called for the federal government to “enforce the individual mandate.” That’s part of her plan to “fix healthcare.”  The mandate was, of course, repealed. But the mandate, the core of Obamacare, was about as constitutional as requiring every American to prove he is not Bulgarian.

Earlier this month, Nadler issued a warning. “This country has reached a crisis point for women’s constitutional right to control their own bodies and reproductive choices.” The Pandora’s Box known as Roe v. Wade could be at least partially shut.

Nadler seems none too concerned with the constitutionality of Roe. Even Edward Lazarus, a law clerk to the justice who wrote Roe’s majority opinion, Harry Blackmun, admits Roe is a constitutional hoax. “As a matter of constitutional interpretation and judicial method, Roe borders on the indefensible,” he said. “I say this as someone utterly committed to the right to choose.”

The left draws the Constitution like a gun whenever it wants to advance its political agenda. The rest of the time, it’s like legal putty that can be reshaped per the desires of the moment.

In fairness, lots of Republicans do the same. They talk a lot about “original intent” or “the meaning of the text” even as they support things unconstitutional things. Where, for example, is there a constitutional basis for a federal Department of Education? Yet Republicans keep voting billions of dollars for it, every year.

So, when Nancy Pelosi, Jerry Nadler, and more rank-and-file members like Jackie Speier become indignant over violations of the Constitution, don’t smirk too much. Conservatives are guilty, too.

But we at least we recognize that the Constitution does have a fixed meaning, regardless of whether or not we apply it honestly and accurately all the time. This, sadly, is distinct from the Democratic left. Their sudden love for a document they routinely disregard is just a wee bit hard to take.