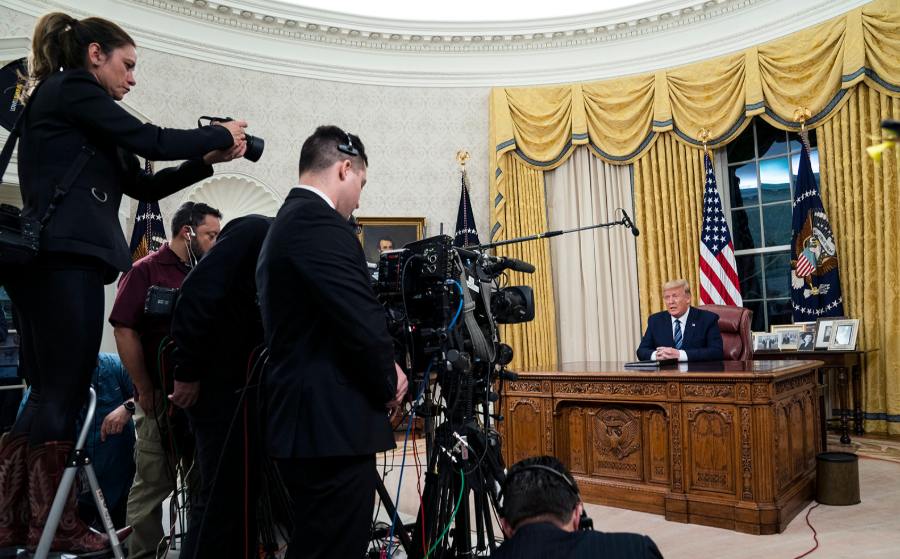 President Donald J. Trump addresses the nation from the Oval Office on the country’s expanded response against the global Coronavirus outbreak, March 11, 2020.

For the past three years or so, I’ve heard Democrats and the media (but I repeat myself) constantly assail President Trump for not having the proper character or temperament to be President. But I’ve always felt that you could judge those things best by watching what someone does in a crisis.

So far in this pandemic, I have seen Trump move early and amid heavy criticism to try to stop people with infections from coming into the U.S. (You can’t keep a virus out, but you can slow it down and buy precious time.) He has appointed the best people possible and given them the power, budget and leeway to do what they think needs to be done.

He has taken actions that he knew would kneecap the economy and harm his biggest reelection selling point, but he put the good of America first and did it anyway. (I could name some other politicians who would not have done that in an election year — and when faced with the situation, didn’t.) He’s trying to walk a tightrope between making the dangers of the disease very clear and reassuring people that it will be all right so don’t panic. And he has reached out to the other Party, urging them to put partisanship aside and work together to deal with the crisis.

So … how has the other side responded? You know, the people with such high standards of “character” for others? Thus far, they have relentlessly attacked, mocked, criticized, second-guessed and undermined everything Trump has tried to do. They accused him of being racist for shutting down travel from China. Then after it became clear that was a very smart move, they criticized him for not doing it sooner. They blamed his speech for the drop in the Dow, even though markets were plummeting worldwide before he ever even spoke, and there was nothing he could have said that would have been interpreted as good news for stocks.

They claimed that Obama would have dealt with a health crisis much better, even though he acted much more slowly in dealing with swine flu. Plus, his Administration spent several years and around $2 billion just to create a health insurance website that didn’t work.

Oh, and let’s not overlook the shameless, self-serving opportunism. Like House Democrats’ attempts to load up the emergency coronavirus funding bill with liberal wish list pork, including Nancy Pelosi’s attempt to sneak in taxpayer funding of abortion. Memo to Speaker Pelosi: the idea of this bill is to prevent death, not subsidize it.

Fortunately, the GOP Senate will have time to go through the House bill and disinfect it, since Mitch McConnell canceled next week’s scheduled recess.

Joe Biden (or more likely, his staffers) rushed out a harsh criticism of Trump’s “lack of leadership.” And a list of things that Biden would have done, all of which have already been done by Trump. Well, all except the first thing, which was to insure that no bias against Asian or Pacific American peoples be tolerated. That’s the modern Democrats in a nutshell: so obsessed with identity politics that their No. 1 priority in dealing with a pandemic is to assume Americans will react to it like violent racists and virtual signal at us. I’d like to see the lab work that shows the virus cannot penetrate a thick layer of self-righteousness.

It’s also been noted how amazing it is that the solution to every crisis is to implement whatever the left has already been pushing for. For many, this crisis has been the perfect excuse to push for full government control of health care (even as they are attacking the government under Trump for “botching” the handling of health care.) Example: Rep. Alexandria Ocasio-Cortez tried to claim that South Korea got the infection under control because they have “single payer health care.”

Twitter users quickly reminded her that so does Italy, and they’re so overwhelmed that experts warn hospitals may deny care to elderly people and send them home. Should we call the officials who have to break that news to the elderly Italians “death panels”?

CNN Freaks Out Over “Racist” Language They Themselves Used

As for the news media, I’m sure you know how well they reacted to Trump’s call for unity. For instance, CNN’s Don Lemon nearly blew a gasket when he couldn’t get even noted Trump critic John Kasich to attack Trump’s handling of the crisis.

We’ve also had a rash of media outlets declaring that Trump or anyone else who describes the disease as the “Wuhan virus,” the China virus or even a “foreign virus” is racist and xenophobic. In doing this, they’re carrying water for the communist government in Beijing, which started calling that racist because even though it was 100% accurate, it was bad for their phony image. It’s actually no more racist than calling linguini “Italian food.”

This prompted conservatives on social media to pull up dozens of clips of the PC talking heads using those exact same terms over the past month. Here’s a sample compilation.

I was genuinely hoping that the media and the Democrats would heed Trump’s call to put America first, set aside partisanship and pull together. (Some, like California Gov. Gavin Newsom, really are.) But I guess that for some of them, that’s like expecting a duck not to quack. It’s disgusting that they can see something that’s causing so much human suffering as an opportunity to score cheap political points. But their attempts are so obvious — and so repulsive — that this coronavirus episode might prove very costly to them in the long run.