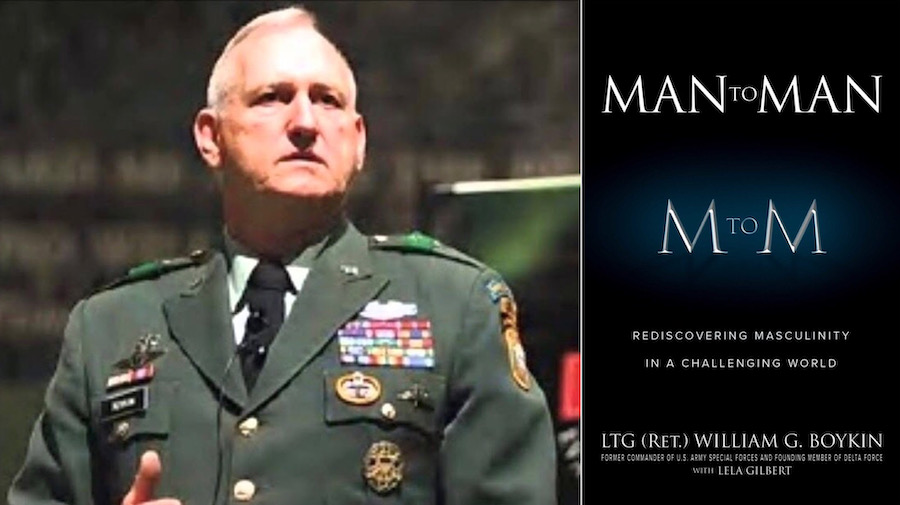 General William “Jerry” Boykin, who served for 36 years in the U.S. Army including as commander of Delta Force, recently authored his sixth book, Man to Man.

His Delta Force missions are legendary: the Iranian hostage crisis, the manhunt for a Colombian drug lord, and the Black Hawk Down rescue operation.

“Be ready at any time, because you never know — and I can give you examples of that,” said General Boykin in a phone interview. “When you’re going down the highway, if there’s an accident on the side of the road, the Lord may tell you to pull off. You may be the only one who understands: people in that wreck need prayer.”

In his latest book, Man to Man, Boykin cuts through cultural confusion to define the current need for true masculinity. Now he discusses the COVID-19 crisis, five essential elements of manhood, and what U.S. families need in men today. The interview has been lightly edited for length.

Warriors And Failures During Global Pandemic

Over your 36-year military career, you’ve seen many crises. What is your assessment of this coronavirus crisis and how long lasting its effects will be?

General Boykin: I think America has changed forever. Some of it will be in what we would consider a negative way today. This thing is bad and, tragically, lives have been lost. But there’s also great potential that God is using this to bring people back to what’s important: back to the Word, back to a focus on him.

Look at the number of people that are watching online broadcasts and acknowledging through e-mails or posts on the web that they have come to Christ. God is clearly in control, and he is using it to build his kingdom. When his purposes have been served, in His timing he’ll bring an end to this.

Public officials are using military terms, saying we must win against this virus. Do you see people stepping up and engaging with this as in war?

Boykin: In some cases, yes. And in others, no. The president is stepping up and being the warrior that he clearly is. And I do see men who are stepping up and trying to be an influence on the culture right now, in their neighborhoods, and certainly in their families.

But then I see others that have failed miserably as far as I’m concerned, because they don’t recognize the nature of this war. The Southern Poverty Law Center, or SPLC, is one of the most dangerous and malicious organizations in America today. Rather than trying to help in a chaotic and confusing time, SPLC is only dividing the nation.

On March 18, the SPLC once again listed Christian organizations on their updated Hate Map. It’s not just denigrating Christian and conservative groups — it’s actually making Christians into targets. And I can show you the evidence if you come to our building here at Family Research Council. You can see the bullet holes from a deranged shooter who entered our building in 2012, because we were listed on the SPLC Hate Map.

Years later, with the shooter still serving his 25-year sentence, FRC is still listed! Southern Poverty Law Center is very dangerous and literally risking people’s lives. With the atmosphere they’re creating with that Hate Map, it’s a failure of leadership especially at this particular time.

Turning to Man to Man, the book dedication is surprising from an Army General. You dedicate it to your father and also to your wife, saying, “both of whom taught me how to be a man.” What have you learned from your wife about manhood?

Boykin: My wife is an extraordinary woman. She’s a very strong and capable woman.

I support my wife and daughters wholeheartedly. And I also have been very supportive of women in the church, to champion them in the issues that women deal with, especially over the past 30 years of ministry.

What my wife has done is repeatedly remind me that I am, according to the Bible, the spiritual head of the family. So she has really not been shy about letting me know her expectations. She quite frequently lets me know that: Now is a time for you to step up. Now is the time for you to lead us in prayer.

I would not be at Family Research Council were it not for her. Even though I knew it, I needed the confirmation from her that this was where we were supposed to be. She has been a strong influence in my life, encouraging me to be the man that God has called me to be.

Regarding the principles of manhood in your book, it seems like two are most focused on the family and leading at home?

Boykin: To begin with, a man is a provider. A man provides not only for the financial needs of his family and those around him, but he provides direction. Just like Joshua: as for me and my house, we will serve the Lord. He provides identity. When you go back to the books of Numbers and Deuteronomy, it’s all about identity. Who are you? Where did you come from? What is the history of your family? A man provides it.

A man is an instructor. A man has to read the Bible and has to know what’s going on in the world that we live in. He has to be able to share that with the people around him — in an authoritative kind of way, not in conspiracy theories and that kind of stuff. Today, fewer than seven percent of U.S. adults have a biblical worldview. I believe it’s largely because men are not doing their job.

As an instructor, you ought to be reading history right along with your Bible. Personally, before I lay down at night, my Bible is right there and I’ve got some history book that I read. Men need to put things in the context of what the Bible says about it, which is the instructor’s responsibility. Also, as an instructor, men have to teach skills, but they also have to teach their children especially to endure hardship. That’s because it toughens them and prepares them for the real world they go to live in.

Then the other three essential elements of manhood involve the family, yet are also focused on church and society?

Boykin: You defend what you hold dear, so a man is a defender. I took an oath to the Constitution to support and defend it. For 36 years, I did just that wearing the uniform of the United States Army. But there are things that I care about today, such as life. Therefore, I’m very pro-life and I actually take steps to try and defend the defenseless.

But also as a defender, a man has got to realize that you can’t walk by something that you clearly know is wrong — like a woman being abused — and not do something. A man has to take action. A man cannot walk by seeing that kind of thing occur and not step up and do all he can to bring it to an end.

Men are also battle buddies, like Joshua and Caleb. Out of the 12 spies that went in to spy out the land, only two had the warrior’s heart and warrior ethos. Ten came back and said, “Boss, we can’t do it. Sure, it’s a land of milk and honey, but we look like grasshoppers in the sight of these people that inhabit that land.”

But these two battle buddies were of like mind. They trusted and loved each other. They replied, “Come on, we can take it because God promised it to us.” A man needs a battle buddy he can share his greatest fears and concerns with. These men battle for each other in prayer; they listen and will not compromise the other’s confidence. Men are not islands. As iron sharpens iron, so one man strengthens another.

Finally, a man is a chaplain. At an event or other occasion, you may be the one they call on at any time to pray. You can’t be the instructor or chaplain in your home if you don’t know the word of God. As the spiritual head of the family, you are to develop a biblical worldview within the children that you influence in your home. So it’s an exhortation to have a structured program to read the word of God every day.

Opportunity in the Crisis

Of those five, which one or two elements do you most often see absent in young men today?

Boykin: I would say the provider, and it’s not just in the physical provision. I don’t see many men that recognize their responsibilities to provide for the spiritual needs, the direction and identity of their family.

Then many men today come up very short in terms of being the instructor. They get distracted by their hobbies, by other things, and they don’t study history. As instructors, men ought to be helping overcome the lack of American history in our public school system. Men ought to be teaching about the sacrifices that have been made, about the great things that America has done for the world, about the great leaders that America has produced and provided.

America has made this a better world. Certainly we can’t overlook the negatives. We’ve got to talk about slavery, too, and how we treated the American Indians. Those tragic chapters are part of our history, which we should be teaching our children. They’re sure not getting it in the public schools.

What is your advice to Christians seeking to be a godly witness during this confusing time?

Boykin: The best thing that we can do is live our faith. What people see in you is a whole lot more important to them than what they hear you say. We need to be ready with God’s word, in season and out of season.

Because when a friend is on the cusp of suicide, we may be the very ones that can prevent that. We may have the rapport to say: “You know you don’t have to do this. There’s another way, which is through the blood of Jesus Christ.” We may be the very ones that lead them to Christ. But we as Christians have got to be ready and looking for those opportunities that Christ is clearly going to give us.

I recently spoke to a stockbroker friend of mine out in California. He said his clients are not Christians, but he has had many of them now ask him to pray for them in this confusing, chaotic time. That’s incredible. So let people see you living your faith now. Because it’s not going to be long before they’re going to be approaching you.

The sixth book by General William “Jerry” Boykin, Man to Man is currently available wherever books are sold. Watch the video below to hear more of his story.