CNN Exposed: The Sword of Fear Cuts Both Ways 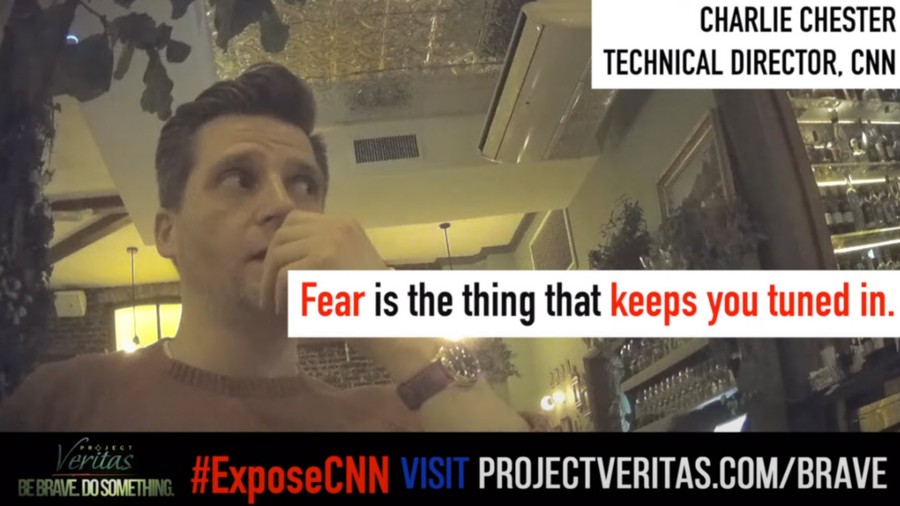 Have you seen the Project Veritas undercover video footage exposing CNN’s extreme anti-Trump animus (see here and here)? Have you seen the candid comments about their intentional misrepresentations of both Trump (negatively) and Biden (positively)? Have you heard the unashamed admission that “fear sells”? Even to the point of pushing a running COVID death count ticker on their screen to increase anxiety and attention?

On the one hand, this is not surprising at all, given the obvious bias of CNN’s coverage, in particular, over the last 5 years.

On the other hand, to hear Charlie Chester, a technical director with CNN, state things so plainly is almost unnerving.

He said, “Our focus was to get Trump out of office, right? Without saying it, that’s what it was.”

And this: “[Trump’s] hand was shaking or whatever, I think. We brought in so many medical people to all tell a story that was all speculation — that he was neurologically damaged, and he was losing it. He’s unfit to — you know — whatever. We were creating a story there that we didn’t know anything about. I think that’s propaganda.”

Don’t We Do The Same?

Yet, before we condemn CNN for using this fear-based tactic, we conservatives (and Trump voters) should ask ourselves an honest question. Do we not also use the “fear sells” technique?

The real question is whether the fear is based on truth rather than on lies. That’s what really matters.

This, of course, does not justify CNN’s propagandistic reporting. Not for a moment.

This does not minimize the depth of their deception or the degree to which they knowingly and willingly misled their audience.

But, to be candid, we must realize that the “fear sells” sword cuts both ways, and it is not just the left that has a monopoly on exaggerated and even misleading reporting.

Wasn’t “fear sells” a major weapon in Trump’s arsenal? Wasn’t it one of his most powerful rhetorical tools, as he warned Americans about the dangerous direction in which this country was heading? And weren’t we encouraged to vote for Trump as if he were the last bastion standing against the destruction of America? Fear sells indeed.

Is the Fear Based on Truth or Lies

The real question is whether the fear is based on truth rather than on lies. That’s what really matters.

Personally, I have been sounding the alarm for years, warning my readers and listeners and viewers about the spiritual and moral decline of the nation. I have written articles with titles like “Revival or We Die,” making clear that a national awakening is our only hope.

I have often warned that we stand on the edge of a very real precipice, and we are close to crossing over the point of no return.

That means that the use of fear to mobilize your audience is not wrong in itself, as long as the fear is based on truth. Hundreds of warnings in the Bible follow this very pattern, and the motivation for the warning is love.

In contrast, if it is a manufactured fear or an exaggerated fear, and if that fear is created to advance a selfish or partisan agenda, then that is a highly unethical, terribly dangerous practice.

Was Trump acting like a true prophet, warning of the demise of America, speaking accurately and carefully? Or did he, too, play fast and hard with the truth for the purpose of political gain? History will judge his actions and his words, and only God knows his heart.

What we can say for sure is this. To the extent that Charlie Chester’s words reflect CNN policy, their use of “fear sells” was of the basest, most vile sort. History will not judge them kindly.