The same peaceful Muslim protesters can be seen at multiple demonstrations. 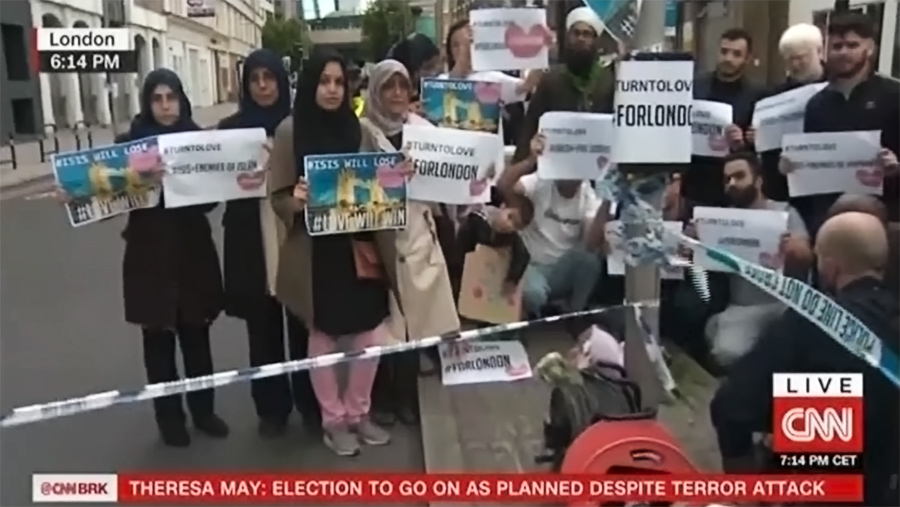 Yesterday, a Londoner by the Twitter name @markantro filmed a CNN crew telling a group of Muslim women wearing head coverings on where to stand for a photoshoot. In the tweet, he claimed CNN was “Staging the event.”

Other critics have also accused them of staging the event. CNN called the claim “nonsense.” They said, “Police let demonstrators through the cordon to show their signs. CNN along with other media simply filmed them doing so.” The CNN report can be seen below.

The “mum’s” group holds signs with messages like “ISIS will lose” and “ISIS = Enemies of Islam.” The crew has the women huddle into a tightly packed group to fit them all into camera coverage. At one point, someone steps forward to offer assistance to one or more of the women.

Next, white police officers securing the area are seen leaving as dark-skinned officers take their place. When everything is set, CNN’s Abu Dhabi Managing Editor Becky Anderson begins filming a report. She gushes over them, describing it as “a wonderful scene” and “poignant.” She raves, “Look at all the people around me here, behind me here, sad about last night but hopeful for tomorrow.”

The Inquisitr reports, “Fox News, BBC, CNN, and The Guardian have all allegedly used either images or video footage of these same Muslims carrying the same signs in various parts of London.”

An AP photo appears to capture the same group standing somewhere else. A man from the first group with green around his neck is also in the AP photo.

A group of London Muslims have come bearing flowers and posters saying "ISIS will lose" and "Love will win" across a photo of Tower Bridge. pic.twitter.com/ECCLIRC3dp

The Daily Mail‘s Katie Hopkins tweeted out more photos of the group posing in other locations. She observes that a woman wearing pink pants can be seen in multiple photos.