Close the Real Concentration Camps … the Ones in China 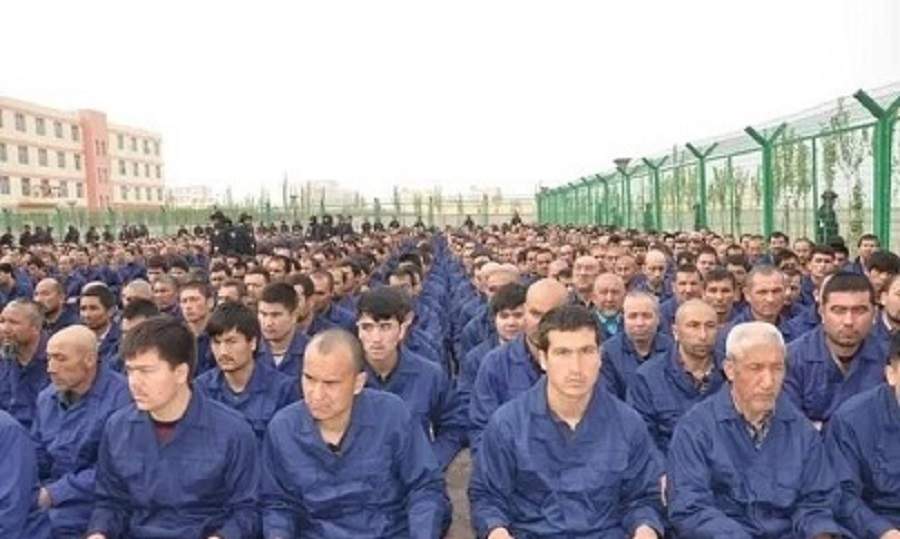 Between one and three million people suffer in Chinese re-education camps like this one.

You probably haven’t heard about the concentration camps in China. Mainstream media have instead bombarded you with misleading images of temporary immigrant holding facilities in America.

Leftist politicians have been crying out on social media and posting photos of themselves weeping by chain link fences in Texas or Arizona. They have been calling on people to abolish ICE and to #CloseTheCamps. We can agree that extending help to the vulnerable is never wrong. But we can and must argue sanely on how best to help migrants at the border. And ask whether a long, unsecured border is really safe for America to have. Safe for Americans, or safe for migrants.

Calling on the U.S. to “close the camps”? That’s a cheap, hyperbolic propaganda campaign. It conflates short-term processing facilities to handle a sudden migrant influx with some of the worst hells on earth in history. There is literally no comparison.

Pretending that the U.S. is running “concentration camps” is crassly insulting. Not just to our intelligence, but to our consciences. It mocks the survivors who lived through the terror of Nazi concentration camps. And it cheapens the suffering of those in China’s real concentration camps today. As you read these words some three million Uyghurs and other Turkic peoples sit behind barbed wire, under guard. It’s the largest mass incarceration of any group since the Holocaust.

Likely you haven’t heard about this massive crime. The MSM isn’t keen to tick off the totalitarian government of China. That might cost them millions in future revenue. We’re grateful that a few people with platforms, such as the honorable Eric Metaxas, have broken the media blackout:

Agitprop that Mocks the Vulnerable

Instead of risking their ties with China, MSM outlets focus on what powerful Democrat politicians feed them. You’ve likely heard of Rep. Alexandria Ocasio-Cortez tweet claiming American holding centers are concentration camps. Her buddy, Rep. Ilhan Omar, agreed with her. Omar wrote: “These are camps and people are being concentrated.”

MoveOn.org organized “Close the Camps” rallies across America at the local offices of Congress members. The Progressive, a leftist publication, wrote the following on July 9, 2019:

We are calling on all people of conscience to shut down the concentration camps on the US-Mexico border through any nonviolent means necessary… . Doctors say children are being detained in ‘torture facilities.’

Torture facilities? Those of us who know actual history remember what that means. Jewish children really were detained in torture facilities. Then used as human experiments by the infamous Nazi Dr. Josef Mengele. Men like Mengele amputated limbs. They injected children with typhoid. They performed fatal blood transfusions and committed countless other horrors. In today’s America? Some migrant children wait with their families in crowded holding centers, which sometimes run out of toothbrushes.

The Progressive doubled down on its moral squalor. It wrote:

Unless people step up to stop them, concentration camps always get worse. Today it’s refugees; tomorrow it could be Muslims, journalists, political opponents, and anyone who doesn’t think or look quite right.

Shameless. Absolutely shameless. Muslim Uyghur families are in fact being sentenced to life in concentration camps for not “looking right.” Their children kidnapped and shoved into child prisons. There the Party indoctrinates them into good little Communists. Their parents never see them again. Is anything remotely comparable happening in America?

Why Help Fill Our “Camps?”

The politicians manufacturing outrage don’t even believe their own agitprop. If they did, they’d believe the U.S. an evil country. One that hates migrants enough to “torture” their children. If that were true, then Reps. Ocasio-Cortez and Omar should be screaming at migrants not to come near our borders. Can you imagine Jews flooding into Germany during Hitler’s regime?

But these politicians are not warning migrants to stay away from our “concentration camps.” Instead, they call for more mass migration, even open borders. In other words, if the U.S. really had “concentration camps,” the left would be the faction helping to fill them with innocent victims.

Leftist politicians are not warning migrants to stay away from our “concentration camps.” Instead, they call for more mass migration, even open borders. In other words, if the U.S. really had “concentration camps,” the left would be the faction helping to fill them with innocent victims.

So much cynicism. So little concern for actual victims. Philosopher Rene Girard warned the world against Victimism. He chose that word for people who feign concern for the vulnerable as a means to grab political power.

We know that such politicians don’t really care. If they did, they would be organizing rallies for millions of Uyghurs and other Turkic peoples in real concentration camps. But nary a word. Instead the left and the media sit silent while many Americans remain uninformed. And China’s camps fill up with victims.

Who Are the Uyghurs?

The mostly Muslim Uyghurs are a persecuted population of Turkic people. The Chinese Communist government labels them as the enemy of the people and the state. Uyghurs are the indigenous, Indo-European and Turkic people of the former East Turkistan Republic. China invaded and occupied their country in December 1949. They renamed it Xinjiang, which means “New Territory” in Chinese.

Eurasian in appearance, the Uyghurs identify as culturally, linguistically, and ethnically Central Asian (Turkic) rather than Chinese. Originally, the Uyghurs were the dominant ethnic group in the area. Then the Chinese government started flooding the region with Han Chinese migrants. Why? To ethnically and culturally dispossess the Uyghurs.

A Genocide in Progress

That, American friends, is what happens in actual concentration camps. In case anybody cares.

Uyghurs face savage religious persecution. Uyghur children disappear into boarding schools that are referred to as “kindergartens.” Leaked videos show highly guarded, brightly colored, dystopian re-education centers. The children there learn to hate their parents’ religion and race. They sing of their love for the atheist communist government imprisoning their families.

Uyghurs who live outside the concentration camps aren’t free. They live in a constant state of censorship and religious oppression. Even though there are mosques in East Turkistan, they are empty. Nobody dares to make himself a target. China doesn’t bulldoze them, merely to keep up appearances. Uyghurs are prohibited from reading the Qur’an or speaking or singing in their native tongue. They are forbidden to fast through Ramadan.

Swarms of police guard every city street. Tens of thousands of cameras equipped with facial recognition and other intelligence technology watch most locations. Surveillance apps on smart phones are spying, too. Anybody can prove an informant.

China makes arrests at night, swiftly and quietly, to preserve the appearance of a peaceful society during the day. Groups are rounded up and escorted to “re-education” camps for contrived offenses or no offenses at all. Things such as “looking” Uyghur. Or having a beard. Or publicly praying.

Traveling to countries like Turkey or Afghanistan can land somebody in one of the many concentration camps networked throughout East Turkistan. The Chinese government calls them vocational training centers. China doesn’t even bother to hold show trials before locking people away.

Arrests only increased in the last few years. The pretext? China’s fight against “violent radical Islamism.” That’s a lie. Instead, follow the money.

China’s government is fixated on massive infrastructure-building program that stretches from East Asia to Europe. It is called the Belt and Road Initiative (BRI). BRI is a massive project that will link Beijing with about 70 countries and make trading more efficient and profitable. And runs straight through the Uyghur homeland.

The BRI would create highways, railways and pipelines. And make border crossings smoother. The goal of course: to expand China’s influence and economy globally. Many neighboring countries stand to benefit. Is that why even Muslim countries mostly stay silent?

Uyghurs have been resisting Chinese nationalism for generations. China cannot afford any uprisings for independence like that of East Turkistan’s neighbors in Kazakhstan. So China wants to eradicate the national identity of the Uyghurs and the other Turkic peoples of East Turkistan. That will keep the BRI safe, and the profits rolling in, to fund China’s massive military expansion. Aiming to compete with the United States, China is arming faster than Hitler did in the 1930s.

Why Should We Care?

We live in an era of information wealth. Satellite pictures have captured images of the concentration camps/prisons and “kindergartens.” We cannot say we did not know about these camps (as many Germans claimed). There is no excuse. The world is turning a blind eye to this modern Holocaust. Even Muslim countries like Pakistan and Turkey, who boast about their role in the protection of Muslims are doing nothing.

Our own media distracts us with “fake news” like American “torture facilities.” If the world can turn a blind eye to the suffering of millions, nobody is safe. It sets a terrifying precedent. You might be next. We challenge those politicians who cry about American “concentration camps” to put their money where their mouth is and stand with us. Back the Uyghur Human Rights Policy Act, now before Congress.

Let’s #CloseTheCamps, all right. The real ones. In China.

Jason Jones is a Senior Contributor to The Stream. He is a film producer, author, activist and human rights worker. You can follow him @TGCWithJason.

Salih Hudayar is Uyghur-American who founded the East Turkistan National Awakening Movement, a non-violent human rights and political organization striving for restoring East Turkistan (“Xinjiang)’s independence. He also serves as the Ambassador to the United States for the East Turkistan Government-in-Exile and is currently pursuing a Masters in National Security Studies at the American Military University.