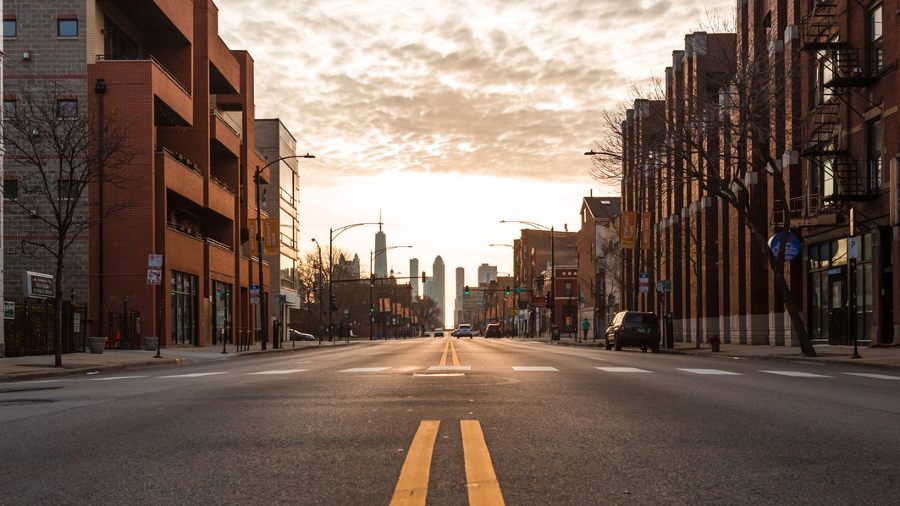 Morning during a stay-at-home mandate in Chicago, Illinois, April 6, 2020

A new report from the World Health Organization (WHO) calls for a “climate lockdown.” Key political leaders insist that the world abandon fossil fuels for energy. They want a trial “lockdown” to reshape how we produce and use energy.

But are such extraordinary measures really necessary? Can the church be silent when they threaten harm to the world’s poorest and most vulnerable?

To answer these questions, we must understand two things. First, the suggested climate lockdowns and their impact on the poor. Second, Scripture’s instruction to the church to help the afflicted.

The most dramatic call for climate action, however, followed the COVID-19 pandemic. The World Economic Forum (WEF), following WHO, recommends against normal economic activity after the COVID lockdowns. It wants governments to use the same authoritarian attitude they displayed during the pandemic.

“Governments and businesses across the world have shown in their response to the pandemic that they have the power, flexibility, and speed to deal with a global crisis,” said the WEF. “… The recovery from COVID-19 is not a choice between economic recovery versus a green agenda, but an opportunity to achieve one with the other.”

Now, we face another threat to the world’s poor and vulnerable: “Climate lockdowns.”

Reports call for COVID-like lockdowns every other year. A paper released in March 2021 suggested the “world needs equivalent of pandemic lockdown every two years to meet Paris carbon emission goals.”

Such calls ignore the devastating impact of lockdowns on the poor. But such policies raise the price of energy and every other commodity.

“As the Covid-19 pandemic-induced lockdowns wreaked havoc on the economy and livelihoods, an additional 31 million people were pushed into extreme poverty in 2020 compared to 2019,” read the Goalkeepers report.

If you’re in extreme poverty, every economic lockdown is a near-death blow.

How Should Churches Respond?

For Christians, the call to protect and help the disadvantaged is not an option. It’s a command. Throughout history, Christians have labored to ensure justice for the oppressed. They’ve worked sacrificially to help the poor climb the economic ladder.

In India, for example, under British colonial rule, Christian leaders argued for the rights of slaves. They helped India’s independence movement. In England, a Christian, William Wilberforce, played the central role in abolishing the slave trade.

“God Almighty has set before me two great objects,” he said, “the suppression of the slave trade and the reformation of manners.”

Now, we face another threat to the world’s poor and vulnerable: “Climate lockdowns.”

The church can no longer ignore the politics of climate change. So, how should we respond? What should we do when climate lockdowns threaten to force a billion people back into poverty?

We are nowhere close to predicting long-term global temperature. Every contrary claim is based not on real-world observation — the bread-and-butter of science — but on computer models. But those models err grossly and repeatedly. We have no scientific technology that can predict long-term future global temperature.

Does that surprise you? After all, you’ve heard the opposite for decades now.

Don’t take my word for it. Here’s what the United Nations Intergovernmental Panel on Climate Change says: “The climate system is a coupled non-linear chaotic system, and therefore the long-term prediction of future climate states is not possible.”

The warming in the last two centuries has not harmed humans or any life on Earth. To the contrary, it has benefitted civilization and the biosphere.

Every measure of human physical wellbeing has improved during the last five decades. This includes access to clean water, efficient agricultural systems, nutritious food, efficient use of manpower through technology, and reduced mortality.

The only justification for a climate lockdown would be fears of catastrophic warming in the future. We’ve already seen that we can’t predict any such thing.

But suppose temperature does rise to levels claimed by the mainstream media. What do you think would happen? Would humanity go extinct? Would life on Earth end?

Would It Be an Emergency if Global Temperatures Rose?

No. The impact on human life would be minimal.

Again, don’t take my word for it. The United Nations says that even a 3.66-degree Celsius increase in global temperature by 2100 would cost only 2.6% of global GDP! And that’s 2.6% of a global GDP multiple times larger than today’s!

That is not an emergency. It does not require shutting our economies every two years. Not when the U.N. predicts the average person will make four-and-a-half times the income he made in 2020!

However, climate lockdowns and restrictive energy policies could cause a much bigger impact on people’s livelihood. That’s especially true for the poor.

For a poor person in the Third World, access to cheap, reliable electricity can be the difference between life and death. One cannot expect a solar panel (on a rainy day) or a wind turbine (on a calm day) to power a hospital in Africa where critical surgeries are performed. Even in the U.S. and the U.K., energy poverty — driven by climate policies — is a major problem for the poor.

This is why the church must stand up against climate lockdowns and anti-fossil energy policies that burden the poor. Not just because they are lethal, but also because they are unjustifiable.

Vijay Jayaraj (M.Sc., Environmental Science, University of East Anglia, England), is a Research Contributor for the Cornwall Alliance for the Stewardship of Creation and resides in Bengaluru, India.