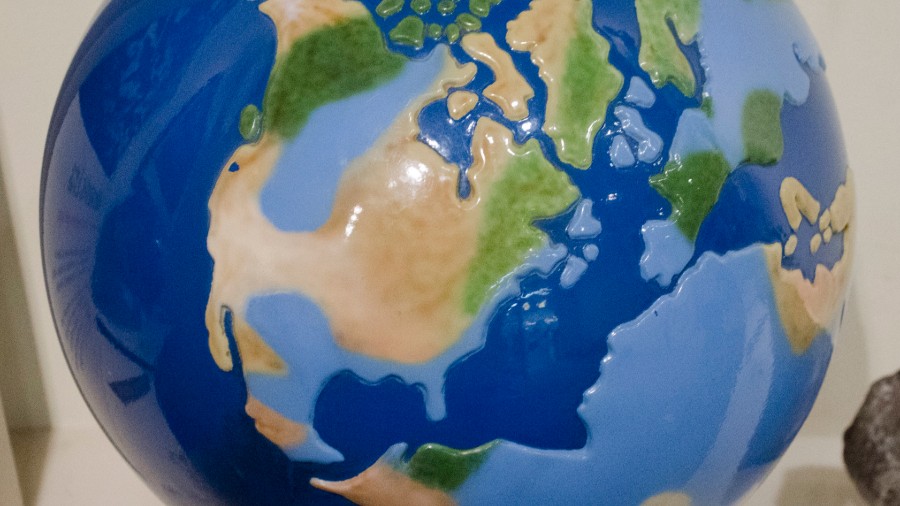 Editor’s Note: This article is the first of a five-part series on climate change.

The North American Inland Sea, sometimes called the Western Interior Seaway, once covered a huge portion of North America. It was 2500 feet deep in places, and 600 miles wide. Louisiana and Oklahoma were underwater. So was Texas, except for a few islands we now call the Texas Hill Country. Much of Canada, too. Most of the states of the Intermountain West — Colorado, New Mexico, Utah, Wyoming and others — were a vast mountainous island.

We know about the North American Inland Sea in part because of fossils. Professional scientists and amateur collectors find fossils of ancient seagoing animals in rock sediments in Colorado, Wyoming, the Dakotas. Indeed, all over the West.

What are Fossils of Marine Animals Doing in Iowa?

One of the more fascinating figures of the 19th and early 20th century was Frank Springer. Springer was a lawyer, politician, and entrepreneur who moved from Iowa to New Mexico as a young man. The town of Springer, New Mexico, is named for him. He was a key figure in the development of Santa Fe into a globally-known arts colony.

Springer was also an amateur paleontologist. He became the world’s leading authority on crinoids. Crinoids are marine animals that include starfish, brittle stars, sea urchins, and sea cucumbers. Springer became fascinated with these sea creatures as a boy. He would find their fossils embedded in the cut banks of creeks and rivers near his home in Burlington, Iowa, nearly 700 feet above modern sea level. Springer’s collection of crinoids — sea creatures from the Western Inland Sea — eventually became part of the Smithsonian Institution.

Today, of course, Burlington, Iowa, is not underwater. Denver is not a port city. The Texas Hill Country, which includes Austin, does remain something of a cultural and demographic island. But that’s another story.

So what happened? A part of the explanation is climate change, specifically global cooling.

The fossil record tells us that the Western Inland Sea was a tropical sea, even as far north as Canada. At its highwater mark, the temperature of Planet Earth was about 4 degrees Celsius warmer than it is today. At the time, sub-tropical vegetation grew in Greenland. Tropical palm forests covered the part of Wyoming not underwater.

Of course, human activity played no role in the creation of this very warm period in the earth’s history.

Neither did humans play a role in the dramatic cooling that followed. That cooling period eventually resulted in an ice age which covered the earth in glaciers. They reached as far south as the 45th parallel, or halfway from the North Pole to the Equator. The states of Maine, Oregon, Washington, and North Dakota were buried under massive sheets of ice. It was when the last ice age ended that the retreating glaciers formed the Great Lakes and made Minnesota the “Land of 10,000 Lakes.”

In short, humans or no humans, the earth is constantly warming or cooling.

That’s just the way it is.

Not Too Long Ago We Were Debating Global Cooling

For the past half-century, the extent to which the planet is warming or cooling, and its causes, have become matters of scientific and political debate. For much of that time, the debate was not about global warming, but global cooling.

The modern era of instrument-derived record keeping goes back only about 150 years, to the 1880s. Satellite data go back only about 40 years. That means we don’t have a true baseline of global data that pre-dates the Industrial Revolution.

This latter cooling trend created a minor publishing phenomenon. Books warned of a “coming ice age.” A 1975 Newsweek article called “The Cooling World” said cooling “may portend a drastic decline for food production.” The article went on to say: “Meteorologists disagree about the cause and extent of the cooling trend. But they are almost unanimous in the view that the trend will reduce agricultural productivity for the rest of the century.”

That, by the way, did not happen.

In 1974 Time magazine published “Another Ice Age?” It looked at the data from the “cooling period” of the previous 25 years and arrived at a similar conclusion.

When meteorologists take an average of temperatures around the globe, they find that the atmosphere has been growing gradually cooler for the past three decades. The trend shows no signs of reversing. Climatological Cassandras are becoming ever more apprehensive, for the weather aberrations they are studying may be the harbinger of another ice age.

The most obvious flaw with these conclusions is the time frame considered. Given the natural variation of the climate, 25 years of data is simply not enough to draw a defensible conclusion. The National Oceanic and Atmospheric Administration (NOAA) defines climate as “the average weather over at least a 30-year period.”

Still, since 1976, surface measurements seem to indicate that the planet is warming. However, the “time frame problem” remains. No one can make a conclusive case for climate change — either warming or cooling — without a half-century’s worth of data. Even 40 years since the end of the last cooling period is, in geologic time, the blink of an eye. Further, data from the era before instruments — from time immemorial until the 1880s — suggest that the change in global temperature can vary as much as 4 degrees Celsius from trough to peak. In 2019, the average global temperature is about 1.4 degrees Celsius from the coolest spot in the most recent global cooling period, around 1910.

This sort of temperature variation is significant, but not unprecedented, even during historical times. For example, beginning about 250 B.C. the world entered a warming phase. This warming phase roughly corresponds with the beginnings and growth of the Roman Empire. That’s why we call this period the “Roman Warming” or the “Roman Warm Period.” The study of tree rings, as well as literary records, indicate a climate as warm as or even warmer than today. This warm period lasted for hundreds of years.

The Roman Warm Period contributed to prosperity previously unknown in human history. The Roman Empire could not have flourished without the increased agricultural output made possible by the Roman Warm Period. That flourishing lasted for more than 400 years.

Eventually, the fortunes of the Roman Empire, and the global prosperity of “Pax Romana,” came to an end. Global cooling was likely a major contributor. The temperature of the earth fell around 300 A.D. That began an era that scientists call the “Dark Ages Cold Period.” By the year 500 A.D., the global temperature had fallen about 0.6 degrees Celsius from its peak during the salad days of “Pax Romana.”

Climate Change is Real … but Not Necessarily Harmful

That cooling caused farming output in temperate climates to fall dramatically. The Roman Empire experienced a food crisis. Farther north, crop failures and extreme weather forced Germanic nations to look south for food and warmth. These Germanic tribes sacked Rome in 476 A.D. By then, though, the formerly dominant empire had lost as much as 20% of its population to starvation and disease.

So the first lesson history teaches us about global climate change is that it is real. The second lesson history teaches us is that it disrupts, often dramatically and globally, the status quo. However, it is important to note that not all these disruptions are harmful. In fact, the third lesson we learn from this history lesson is that global warming has often corresponded with eras of prosperity and flourishing, and global cooling with eras of privation.

Even today, according to a study published in the British journal The Lancet, cold weather causes 20 times more deaths than warm weather.

In other words, the greatest hardships seem to occur not when the planet is too hot, but when it is too cold.