May we all step higher. 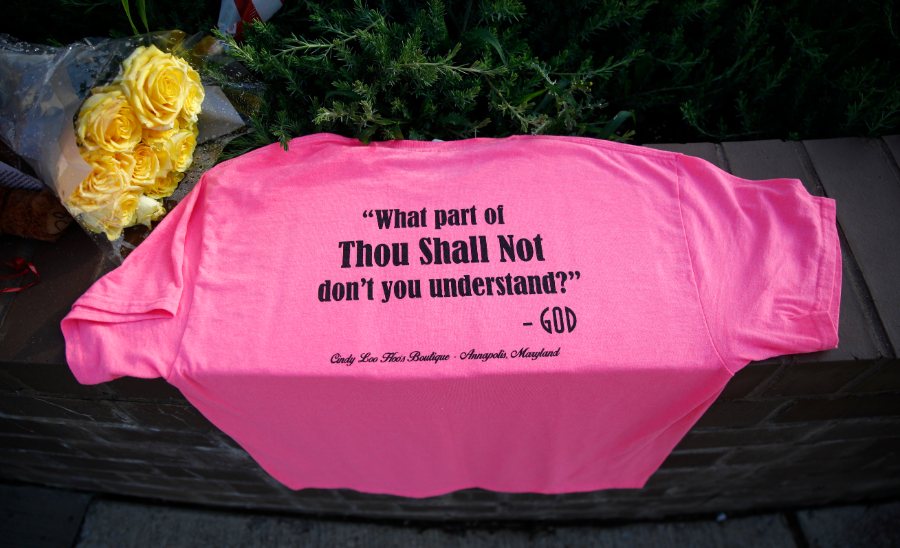 A shirt and flowers rest near the scene of a shooting at The Capital Gazette newspaper office, Friday, June 29, 2018, in Annapolis, Md. A man armed with smoke grenades and a shotgun attacked journalists in the building Thursday, killing several people before police quickly stormed the building and arrested him, police and witnesses said.

From the bottom of my heart I’m making an appeal. To my fellow radio and TV commentators. To other journalists. To all of us posting on social media. Please. Can we show some restraint and demonstrate some civility in the aftermath of the latest mass shooting in our country?

This is not about Trump.

This is not about Democrats or Republicans.

This is not even about gun control.

This is about five people who went to work on Thursday never to return. It is about families in shock and agony and grief. It is about others who were physically wounded and many others who will carry emotional wounds for years.

And, according to the latest reports, this was likely about one man with a personal vendetta against one newspaper company.

Why must we politicize this tragedy? Have we no shame?

A headline on the Huffington Post reads, “The Deadliest Day For U.S. Journalism Since 9/11. The grim milestone comes amid escalating hostility toward the press.”

The article, by Nick Wing, stated, “Although we don’t yet know if the gunman in Annapolis chose to target the Capital Gazette newsroom out of a broader animosity for the media, the killings come at a time of escalating antagonism toward the press, often at the urging of those in the highest ranks of power.”

Another HuffPost headline declared, “‘The Wire’ Creator David Simon Eviscerates Marco Rubio After Newsroom Shooting. ‘You’ve affirmed the notion that the press is an alien, untrustworthy cohort,’ he said.”

This headline and story also remained unchanged after more information about the shooting was released, and despite the fact that authorities have not released an official motive.

What kind of garbage is this? Senator Rubio’s tweets, in fact, were reasonable, as he bemoaned the realities of our deeply divided media. He said, “BTW I’m not happy about this reality. It’s terrible for country. Lack of trust in reporting leaves us vulnerable to conspiracy theories & unable to have debates b/c we can’t even agree on baseline facts. We are all ALL to blame for this mess. Sorry, that includes many in media.” (This was one of several tweets he posted.)

It is obscene that, after the shooting, David Simon tweeted, “From the vantage of someone who is waiting for the death count of journalists shot in their newsroom in my home state, can I simple say that @marcorubio is unfit to be a citizen of a republic, much less a legislator. You should crawl through broken glass to hell, Senator.”

At a tragic time like this, when coldblooded murder hits us between the eyes, we have no excuse for irresponsible reporting.

Talk about a rush to judgment. Talk about an embarrassing tweet. Shame on David Simon for connecting Rubio’s reasonable tweets with the slaughter in Annapolis.

As the night wore on, Simon turned his wrath on Trump, with tweets like this: “My friends die today and you bring this? [He was responding to another tweet.] I expect little of a deranged man with a history of domestic abuse and irrationality [speaking of the killer]. I f—ing expect my president, the leader of a republic, to speak of a free press not as ‘enemies of the people’ as a provocation to such men.”

We can understand the depth of his grief seeing that he lost personal friends. But he has no excuse for drawing a direct line between the shooting and the president.

Blaming it on Trump

“This is what happens when @realDonaldTrump calls journalists the enemy of the people. Blood is on your hands, Mr. President. Save your thoughts and prayers for your empty soul.”

I’m sure he spoke for many who shared his sentiments and also raced ahead to an ugly, incorrect judgment.

To his credit, when the real story came out, he tweeted, “Fair enough to call me out for jumping to a conclusion about the motives here. Vilifying any category of people – journalists, migrants, conservatives, liberals etc – can incite violence. This one hits close to home. Genuinely saddened.”

Sean Hannity was also involved in a controversy as the shooting was reported. During his live radio show, he said,

I’ve been saying now for days that something horrible was going to happen because of the rhetoric. Really, Maxine? You want people to create — “call your friends, get in their faces” — and [former President Barack] Obama said that too. “Get in their faces, call them out, call your friends, get protesters, follow them into restaurants and shopping malls,” and wherever else she said.

This led to headlines blaring, “Sean Hannity blames Maxine Waters and her ‘horrible rhetoric’ for the Maryland newsroom shooting as the Democrat congresswoman cancels events after a ‘very serious DEATH threat’ is made against her.”

Hannity, for his part, shot back, with his staff posting numerous clips from his show where he said he was not connecting Waters’ rhetoric with the shooting. The headline on Hannity.com read, “LIBERAL LIES: The Hill, Media Matters, Daily Beast Lie About Hannity’s Comments.”

The article then states, “Sean Hannity never tied today’s horrific shooting to the comments made by Representative Maxine Waters. Today’s event was pure evil, and no one can control someone who is intent on inflicting pain and violence.”

Listening to the relevant clip, you can argue that Hannity was using the occasion of the latest shooting, which to him was an example of how many sick, evil people are out there, to ask Maxine Waters, Do you realize why your words are so dangerous? There are crazy people out there, and your rhetoric could provoke them to do evil things.

But even putting the best construction on his radio segment (in light of his subsequent comments throughout the show), why bring up Maxine Waters in this context at all?

All of us who speak to hundreds or thousands or millions have an incredible privilege and an incredible responsibility. At a tragic time like this, when coldblooded murder hits us between the eyes, we have no excuse for irresponsible reporting. May all of us step higher. And may God have mercy on the grieving and the wounded.