Christmas 2020: A Little Too Authentic for My Taste 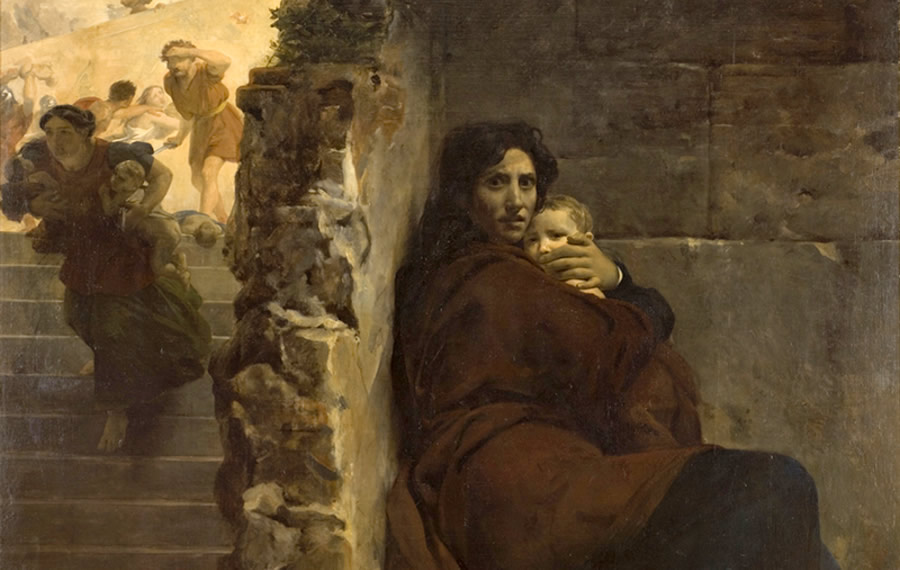 "Scene of the Massacre of the Innocents," by Léon Cogniet, 1824.

In the first humor book I wrote, The Bad Catholic’s Guide to Good Living, I offered a lot of advice. Most of it was very bad advice, offered with tongue firmly planted in cheek, to give my readers a laugh. But out of a sense of journalistic integrity — or maybe just terrible judgment — I decided to try out such advice myself, to see just how bad it was.

I didn’t test every idea. For instance, the recipe I offered, “Bear Claws for the Bear’s Claws,” was a pastry which readers could whip up and serve, by hand, to bears at national parks. I  decided to just wait for letters from readers on how that worked out. Either nobody actually tried it, or none of them lived, but no feedback ever came.

I offered a party idea for marking St. Patrick’s Day: re-enacting the Irish potato famine, offering guests just beer and boiled potatoes, but not enough of them. Those who wanted more would have to fight over them, or bob for spuds in the gray potato water. Again, I outsourced the testing on this to any gullible, literal-minded readers. 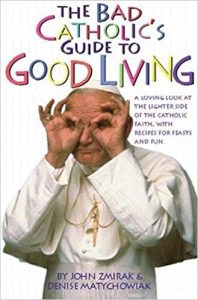 But most of the bad ideas I went ahead and ran with, to see how they’d turn out. So yes, to mark Pentecost, I threw a party with 12 flambeed dishes (one for each of the Apostles, plus Mary). Including the salad. And yes, for the Halloween/Reformation Day celebration, I printed up Indulgence certificates and tried to sell them to guests. I threw a Mardi Gras party where the only entrée offered my hungry guests was (surprise!) bowls of snapping turtle soup.

The awful idea I took the furthest? The “right” way to mark Christmas Day. Let me quote the book itself:

There’s nothing more delightful than going to the home of a friend or family member who has really pulled out all the stops to provide an old-fashioned Christmas feast. Roast turkey or (better) goose with fresh cranberry sauce, roasted potatoes, festive veggies, and plum pudding — all presented on the very best china, with the scent of spiced candles, real pine boughs, and a roaring fire. All these Victorian English trappings have come to define Christmas celebrations for us, and we wouldn’t have it any other way—so long as someone else is hosting.

Because, face it folks, providing all of the above is a heck of a lot of work. What’s more, if you do it right, chances are you’ll get stuck hosting Christmas every year — filling your home with long-lost family members, unmarried high school friends with hungry eyes, bawling children, and sticky pets. Do you really want that kind of “perfect storm” to engulf your overcrowded apartment every December until you finally succumb to Alzheimer’s? (They might keep showing up even then, but at least you won’t mind.)

Make This the Last Christmas You Ever Have to Host

Ever practical and helpful, I offered my readers a simple, decisive solution:

We’d like to suggest a better way. If family members have been broadly hinting that it’s “someone else’s turn” to host the holiday, we suggest you leap to your feet this year and volunteer. That’ll get you points for being proactive.

But when your guests arrive on Christmas Eve or Day, they’re in for a big surprise. You’ll be serving no turkey, no ham, no stuffing, and no eggnog. There won’t be a trace of pine, poinsettia, holly, or mistletoe. And no Christmas carols either.

Because, as you will inform them upon arrival, you’ll have decided to host an “authentic Middle Eastern Christmas,” just like they have over in Bethlehem. That means you’ll serve completely unfamiliar Arab and Israeli dishes, play Lebanese, Syrian, and Chaldean liturgical music, along with the funky Israeli singer Ofra Haza. Neglect all “holiday” programming in favor of documentaries on the sufferings of Christians in the Holy Land. Put up potted palms around the house, and somberly explain that “this is the real Christmas.” Bone up on the impoverished lives of Christians stuck between two sides on the West Bank, and take up a collection to benefit them. Send what you can to the Franciscan Foundation for the Holy Land, 1400 Quincy St., N.E., Washington, DC 20017.

Remind any children who get all stoked about their gifts that “Jesus never had a GameBoy—all he got was some myrrh.” We guarantee you that you’ll never have to host Christmas again.

I even offered a menu and recipes:

Leg of Lamb with Roast Eggplant and Potatoes

White Beans with Saffron and Parsley

Basmati Rice with Dates and Almonds

And yes, dear reader, for Christmas 2004, I really did throw such a party, and serve the menu above — to my blue-collar family from Queens. Most of my relatives think of Chicken Pesto with Linguini as hopelessly “foreign,” and Pad Thai as virtually poisonous. They seem to have inherited my mother’s Irish genes, which drove her to treat black pepper like ghost peppers, and garlic like plutonium. Indeed, one April Fool’s I put some stale garlic powder in her mom’s cough medicine. She tasted it, panicked, and called the Poison Control Bureau hotline. The nice man who answered tried to help her.

“But how do I get the taste out of my mouth?” Mom caterwauled into the phone.

“Just lie down in the dark for a few hours. It should pass. And ma’am, may I ask you, are you Irish?”

“Yeah, what has that got to do with anything?”

“Oh, it’s just that we get these questions a lot. Thank you!”

I did indeed conduct this social experiment in anti-hospitality, and the results were as I expected. Nobody would ever let me host any holiday again.

We Are All in Roman Palestine Now

Because we as believers are gradually being stripped of all the benefits of 2,000 years of Christian civilization. We’re losing happy blessings like family gatherings and public Christmas displays, and essential things, like in-person church services and broad religious freedom. We’re losing the rights and privileges of a free society, which emerged when our mostly Christian founders drew on the natural law and vision of human dignity which our churches passed along. And we’re stumbling as a culture into a dark, unfathomable future of techno-paganism and Anarcho-Tyranny. The outcome?

We’re feeling more and more like Jews at the turn of the first century. We may not have appointed procurators, but we do have stolen elections. In lieu of puppet kings like Herod, we have hapless, useless Republicans. Our elites are steeped in gross superstition and base perversions as Tiberius was on Capri, ruler over Rome when Our Lord appeared in Bethlehem.

For almost 50 years, we have seen the ongoing Slaughter of the Innocents at clinics across our country. Our marriage laws have been shattered like gouged-out mosaics, as also happened in ancient Rome. Too many of our religious leaders act like the Sadducees, happy to trim away inconvenient doctrines and collaborate with Caesar. And our rulers glare at us suspiciously, worried that “Christian Nationalism” might turn us into Zealots they’ll need to suppress, Ruby Ridge or Waco-style.

Let This Guide and Goad Us

I won’t pretend that I’m so unworldly that I’m not scared by and angry at all of this. I don’t think it will necessarily prove spiritually beneficial. For the small number of martyrs great persecutions produce, they also yield legions of weaklings who fall away from the Church. Isn’t it our job to look out for the weakest among our brothers? Insofar as our own failings let pagans and perverts take over our culture, we must repent. And endure this looming occupation by Caesar, Mammon, and Sodom as best we can.

If indeed American Christians are about to endure captivity in Babylon-on-the-Potomac, we can at least let the collapse of our world goad us to think about the next world. We can and should go back and immerse ourselves in the Hebrew Bible. We should be reading the words of the prophets, and the story of the Maccabees. If we are short of angels and wise men, God still has them in great store. As the darkness around us deepens, let’s light our candles and humbly, trustingly beg for the Light to return — first in our hearts, then our homes, then the public square.

A blessed Christmas to all.