A Christian Response to the Allegations Against Judge Roy Moore 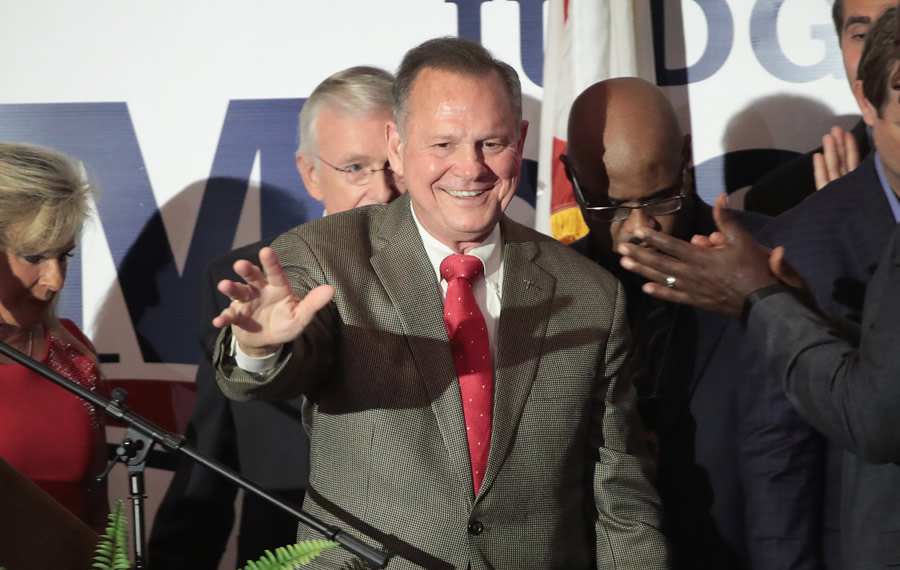 Republican candidate for the U.S. Senate in Alabama, Roy Moore, greets supporters at an election-night rally on Sept. 26, 2017 in Montgomery, Alabama.

How should we respond to the charges against Alabama senatorial candidate Judge Roy Moore? In light of the recent flood of sexual scandals, it’s easy to understand why many Republicans want to distance themselves from Moore. God forbid they seem to be indifferent to serious sexual indiscretions, especially when a 14-year-old is the alleged victim. Yet, Moore has many political enemies. And these allegations are just now surfacing after 40 years. Could it be a political hit job?

This is an especially tough question for Christian conservatives.

On the one hand, we have taken enough heat for helping to elect President Trump, as if his own sexual misconduct was not that big of an issue to us. Will we look the other way with Roy Moore too? If so, can we fault those who question our moral integrity?

A headline on Vice.com reads, “Why Evangelical Christians Stand Behind Accused Sexual Predators. Principles have given way to raw, ugly partisanship.” Over on the conservative, National Review site, Katherine Timpf declares, “If You Refuse to Condemn Predators because of Politics, You’re Disgusting.”

If Moore is guilty of the charges, we should not support him and he should drop out of the race.

Timpf is certainly right. If Moore is guilty of the charges, we should not support him and he should drop out of the race. This is not only because of what he allegedly did, but because he is lying about it today, forcefully denying the ugliest of the charges. As Timpf writes, “The allegations against Roy Moore are disgusting — and if you find yourself reluctant to say so because of your politics, then you’re pretty gross, too.”

But herein lies the problem. These charges remain only allegations. There are valid reasons to question their truth.

Why are they only surfacing now? Is it because women are now feeling empowered to come forward and call out their accusers? Or is it a political ruse? And how did Moore survive being vetted for the Supreme Court of Alabama, ultimately becoming Chief Justice, without any of this alleged immoral and illegal behavior being discovered? How did he even survive the tens of millions of dollars spent to defeat him in the recent primaries without this surfacing?

Or perhaps this is nothing more than a politically motivated attack, coming just when he was poised to win the election.

Think back to the Ted Cruz campaign for president, when 5 women accused him of having sexual relations with them. These were charges he flatly denied. Do we have any good reason today to believe they were true? (Note also that the National Enquirer was their main source.) Perhaps it is the same with Roy Moore. Perhaps this is nothing more than a politically motivated attack, coming just when he was poised to win the election.

What About “Innocent Until Proven Guilty”?

Former Governor Mitt Romney, now considering a run for Senate, tweeted, “Innocent until proven guilty is for criminal convictions, not elections. I believe Leigh Corfman. Her account is too serious to ignore. Moore is unfit for office and should step aside.”

But is this a godly response? I understand that Romney is convicting Moore already based on Corfman’s testimony, in light of which he says, “Moore is unfit for office and should step aside.” Yet is this the response Romney would want (or any of us) would want if he (or we) were falsely accused?

I was never a supporter of President Obama (or candidate Obama). But when I read all kinds of allegations against him or his wife, Michelle, my response was always, “He’s innocent until proven guilty.”

And when it came to President Trump, we knew in advance his long history of immoral behavior. The audio tape of his vile and gross comments from more than a decade earlier only confirmed what we already knew. Our hopes were that he had made some changes in recent years. And despite our concerns, we preferred him to Hillary Clinton.

When it comes to Roy Moore, he is being supported as an overtly Christian, staunchly conservative candidate with high moral principles. Should he by lying now about his ugly past, he would not be worthy of our support.

So, we hold our standards high but we do not condemn without evidence. This seems quite straightforward to me.

We simply don’t know at the moment whether the charges are true. So I agree with President Trump’s sentiments, expressed through press secretary Sarah Huckabee Sanders. He believes that if the “allegations are true” Moore will “do the right thing and step aside.”

I have appreciated many of the stands Judge Moore has taken over the years. So I truly hope the charges are not true and he will be vindicated before the elections. On the other hand, if they are true, he isn’t just guilty of serious misconduct 40 years ago. He is lying about it today, in which case he is obviously not fit for office.

In light of this, I believe an ethically consistent, conservative Christian position looks like this. 1) We agree that if the charges are true, he should step aside, regardless of the political ramifications. But: 2) We view him as innocent until proven guilty. We hope and pray the truth will come to light in before it’s time to vote.

So, we hold our standards high but we do not condemn without evidence. This seems quite straightforward to me.