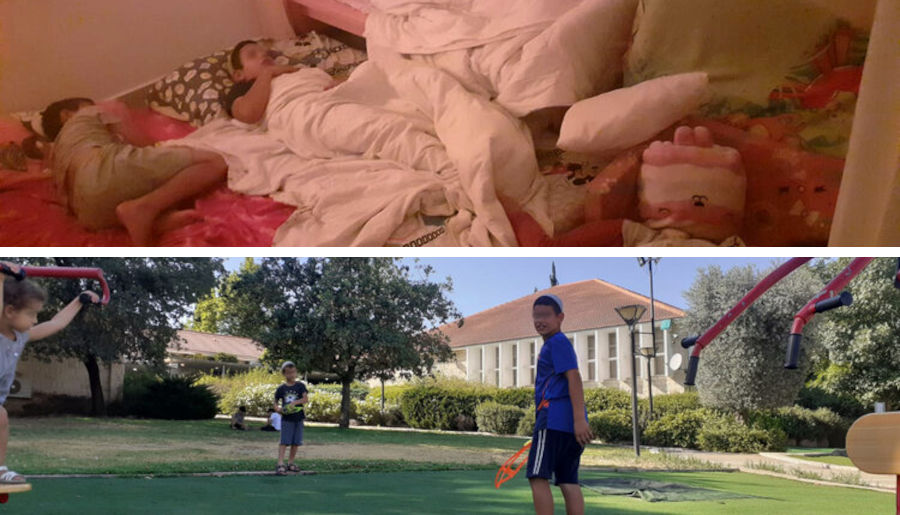 A grateful mother sent before and after photos to Frontier Alliance International (FAI). Before, her children slept in their bunker. Every home in Israel is legally required to have a bomb shelter. They’d been living in theirs for a week due to the recent Gaza-Israel conflict.

Now, this mother’s children are playing with toys, enjoying a beautiful, sunny day in northern Israel. They’re safely away from attacks by Hamas.

FAI created a donation page on May 13 for an initiative to bring to safety Israeli families affected by the violence. They’re renting out hotel rooms in northern Israel and the Golan Heights. Sheltering there helps protect families and provide relief from the stress of responding to rocket sirens.

“Just to put it in perspective for those of you with small kids, imagine, you know, every 15 seconds, 45 seconds, 90 seconds, hearing the sirens go off and having to grab your kids and run into the shelter again. Doing that all day, every day for a couple weeks. That’s what these families are living with right now. So this is a very practical and meaningful way to support them,” Dalton Thomas, founder and president of FAI, said in a May 14 video update. “Just provide them and their families with small kids some calm and some respite from all this craziness.”

“And Shabbat dinner without going to the bomb shelter, which is also important,” Marco Moreno, director of FAI Israel, added.

Thomas said that that 100% of donations designated for this effort will go directly to it. He noted that not only is the initiative sheltering families by bringing them to the North. It’s also supporting the local businesses in the North that have been badly affected by COVID’s impact on tourism.

“It’s actually an awesome way to stand with the local business in the Golan Heights and in northern Israel.”

In a May 16 video update, Thomas said they had rented about 60 rooms across three hotels. He had just delivered a carload of toys to the children.

“We’re working within the means that we have. And everyday we assess what the resource is and then we’ll take more rooms,” Thomas said.