Christ, Not Trump, is the Solid Rock on Which We Stand 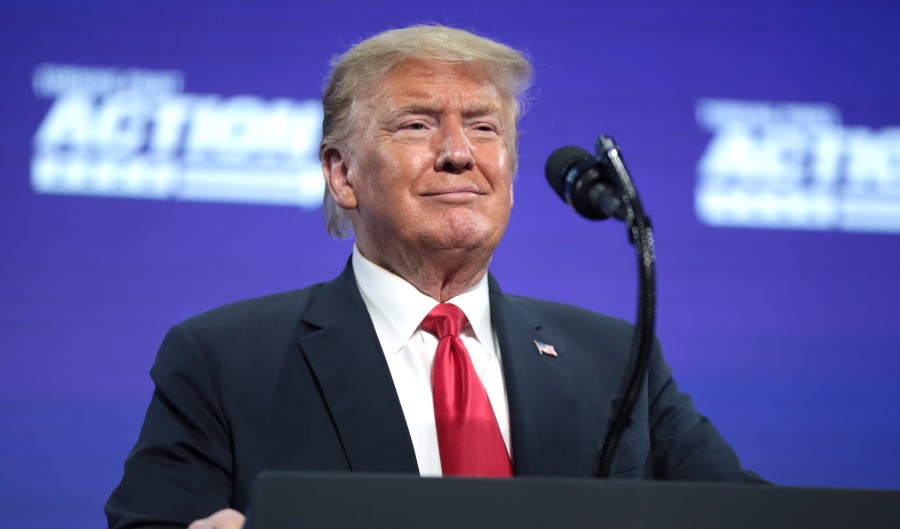 Do you remember when Ann Coulter shocked Bill Maher’s audience in 2015, projecting that Donald Trump was the most likely of the declared Republican candidates to win the election? To the shock of many, she was right.

And do you remember when she wrote In Trump We Trust in 2016? That’s how deeply she believed that Trump was the man.

Today she is one of Trump’s most vehement critics, to the point of crude insult. What happened?

The title of her book says it all. She put too much trust in a man.

That kind of trust belongs in God alone. Everyone else will disappoint us and fall short, one way or another. And the greater trust we put in someone to turn the tide of our nation, the more likely we are to be disappointed. Of that, you can be sure.

In May Yahoo News reported that, “Coulter’s relationship with Trump has been strained for several months, largely because, she said, she is disappointed the president has not done more to stop illegal immigration. But a few days ago things took a turn for the worse when Coulter became enraged over the president’s renewed criticism of Sessions, who is seeking to be reelected to his old seat in the U.S. Senate in his home state of Alabama.”

As a result of Trump’s attacks on Sessions, Coulter blasted him as a “defective man” and worse — actually, much worse. This marks quite a dramatic change from the days of In Trump We Trust.

Donald Trump cannot save America. No one, outside of God Himself, possibly can.

Obviously, there was a degree of tongue in cheek in the book title. And Coulter specializes in being a provocateur. But there was meant to be substance behind the title as well, enough to fill the pages of a book.

Now Ann Coulter doesn’t even know if she can cast a vote for President Trump’s reelection. She longer trusts in Trump.

Our Attitudes Should Reflect Reality

But I bring up Coulter because there’s a lesson here for all of us who voted for Trump, especially those of us who are people of faith.

It’s great that he has kept many of his campaign promises. How many presidents manage to do that?

It’s great that he has not abandoned his evangelical base once elected, something which we’ve seen happen before. We help vote a president into office, then, once elected, he forgets about his voting base — that is, until the next election cycle. To his credit, Trump has not done this.

Trump has even done things that no president before him has done, including moving our embassy to Jerusalem and speaking at the annual pro-life rally in D.C.

But he is neither a savior nor a savior figure, and the more we trust in him, the more disappointed we will be. Donald Trump cannot save America. No one, outside of God Himself, possibly can.

In my new book, Evangelicals at the Crossroads: Will We Pass the Trump Test?, I emphasized that it is not enough for us to say, “Jesus is our Savior. Trump is our president.”

I added, “It’s also crucial that our attitudes reflect this reality, that our hope for the nation is in the Lord, not in a man, that our expectations are tied in with the name of Jesus, not the name of Trump.”

Whose Name is Most Readily on Our Lips?

I also wrote that, “on that final great day, the entire universe will bow down and confess Jesus as Lord, willingly or unwillingly. At that moment, not only will the name of Trump be forgotten, along with all of our names, but no one will notice him among the billions bowing the knee with awe and wonder.

“Only Jesus is Lord. Only Jesus saves. Donald Trump is just one of many billions created by the Son and for the whom the Son died. Let us not lose our perspective.”

A Godly Perspective Will Help Us, But Misplaced Trust Sets Us up For Disappointment

I know that some readers will take issue with me here, not because you think Trump is the savior, but because you feel articles like this will help to deflate Trump’s base.

In reality, the opposite is true. If we put our trust in the Lord, do everything we know how to do as His followers and then vote our convictions, we have a much better chance of improving the state of our nation.

As we have seen vividly this year, not even a bold leader like Donald Trump can stop a pandemic. Or prevent an economic meltdown. Or unite a fractured nation.

He can’t even guarantee that his Supreme Court appointees will live up to his expectations — or ours.

So enough with our foolish, over-the-top trust in people, especially political leaders.

Passing the Trump test doesn’t mean casting our vote for the best presidential candidate, whoever that may be. It means that, in the midst of our voting and political campaigning, our mantra can never be, “In Trump we trust.”

That is a recipe for failure and disappointment.

And this reminds me of a classic Christian hymn, addressing something even bigger than the turning of a nation. Let me leave you with these words:

My hope is built on nothing less
Than Jesus Christ, my righteousness;
I dare not trust the sweetest frame,
But wholly lean on Jesus’ name.