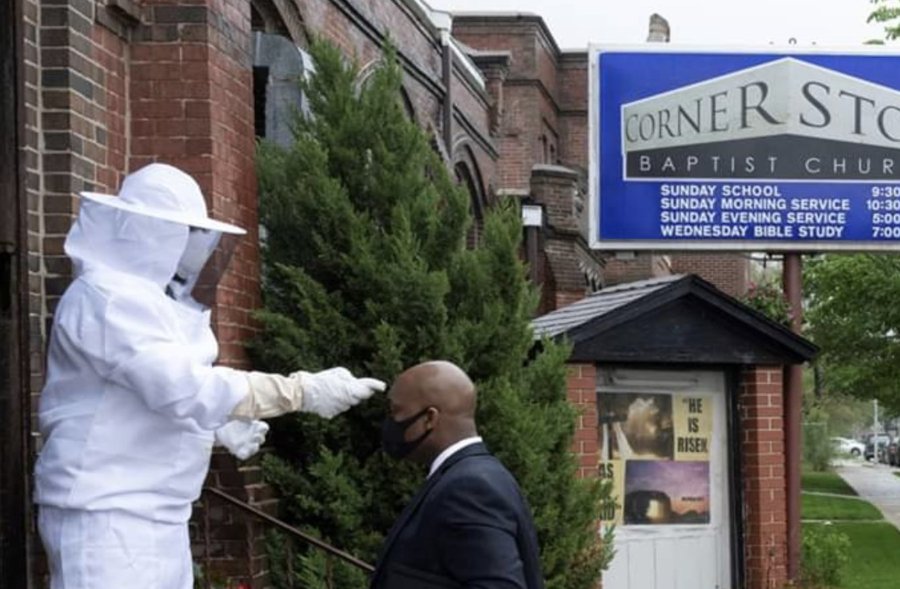 Pastor Courtney Lewis of Cornerstone Baptist Church in Chicago said the church has gone out of its way to follow CDC guidelines by having online services, outdoor services and engaging in social distancing. All church members must also have their temperature taken before entering the sanctuary.

Courtney Lewis, the pastor of Cornerstone Baptist Church in Chicago, was in the middle of his sermon when he heard loud banging on front doors. It was the police.

Mayor Lori Lightfoot had dispatched three squad cars and two unmarked cars along with a representative from the mayor’s office.

Pastor Lewis said the intent was to shut down their Sunday services. It was “like the Soviet-style KGB,” he said. “The only thing she hasn’t done yet is beat the doors down and arrest our members.”

Service Continued Since the Doors Were Locked

Pastor Lewis tells the Todd Starnes Radio Show that the men of the church were instructed not to open the doors during the services — per protocol. The officers were in fact denied entry. “Thankfully our doors were locked as a normal safety precaution we take each service to protect our members from the escalating gun violence in Chicago,” the pastor said.

A church usher, who is typically positioned outside the building during the services, saw the mayor’s goon force attempt to enter the building and began taking photographs.

Even more disturbing, an individual in an unmarked car with tinted windows was seen filming and photographing church members as they arrived to worship Jesus Christ.

“The mayor wants to educate everyone into compliance — which means intimidate,” the pastor said.

Rev. Lewis wrote a letter to U.S. Attorney John Lausch pleading for help and protection against the city’s Democrat mayor and her jackbooted thugs. Click to read the Letter of Grievance.

He said the church has gone out of its way to follow CDC guidelines by having online services, outdoor services and engaging in social distancing. All church members must also have their temperature taken before entering the sanctuary.

Pastor Lewis said Christian pastors are under attack in Chicago and they need help.

“All we are seeking is the same consideration and trust that is being tendered toward the liquor stores, abortion clinics and Walmart,” he told the Todd Starnes Show.