Celebrating How Far We’ve Come: What is No Longer Around From 1776 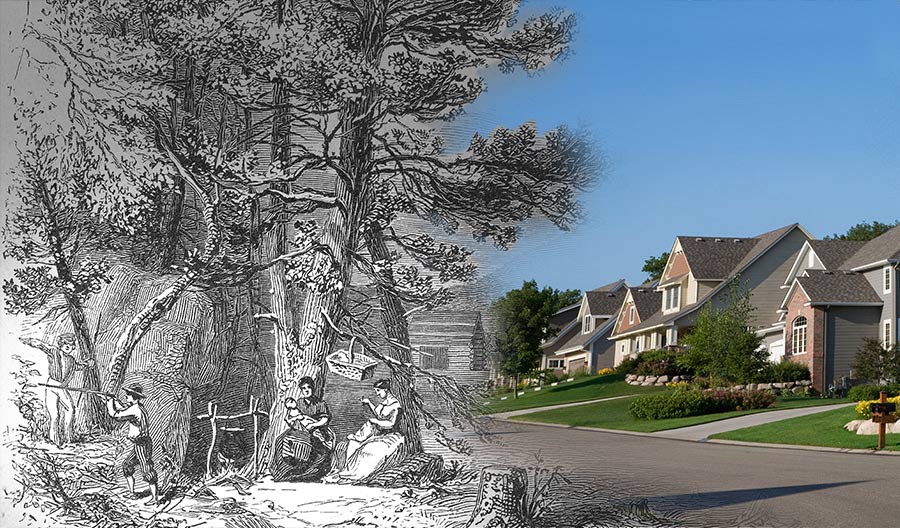 As we celebrate the 241st anniversary of our country’s freedom, let’s look back at what progress has replaced. We’ve been blessed not only by the country our forefathers gave us, but all the practical blessings freedom produced. We owe much gratitude to those who came before and and pioneered the way, risking their lives and living in difficult conditions so that later generations could enjoy freedom and prosperity.

In 1776, about two and a half million people lived in the 13 American colonies, mostly on farms or plantations. Most lived a rough life and the average person died in his or her 50s. Families usually consisted of a mother and father and four to six children. Many had eight or more children, but up to five of them might die due to the high childhood mortality rates.

Families lived in small homes with one or two rooms, about the size of a single-car garage. Many homes had dirt floors. Rooms were heated with wood fires and lit by candles. They had small windows, covered with oiled paper.

People on farms worked from dawn until dusk. They needed to hunt, not just for food but to keep pests and predators away. When crops were harvested, women and girls would dry and store fruits and vegetables for the winter. Chores took longer without conveniences like washers and dryers. Water had to be carried from a well or stream because they didn’t have running water. (Or flush toilets.)

People rarely left their small town. When they did, they traveled mainly by horseback over dirt roads. The wealthy rode in carriages, which were slow and uncomfortable, but protected the travelers from the elements.

In the North, sawmills and gristmills powered by water were common.

Women primarily quilted and embroidered for fun. Men went hunting, bet on cockfighting and played cards. Both sexes enjoyed dancing. Men between 16 and 60 were required to serve in the county militia and bring their own gun. Upper class women might spend half the day getting their hair “permanented” for an evening ball. They wore stays — a bodice with strips of whalebone — and hooped petticoats under their dresses. They carried folding fans. Men dressed up like colonial soldiers in the Battle at the Brandywine reenactment. (iStockphoto)

Both sexes tended to wear their hair long. Both often wore wigs.

School children sat on wooden benches in one-room school houses. They memorized Scripture and learned the basics of reading, writing and arithmetic. Children learned the alphabet using hornbooks, a primer with the letters of the alphabet mounted on wood, bone, or leather. They wrote with quill pens dipped in inkwells. All children were taught to sew and knit.

In the South, children attended “field schools,” with lessons taught outside. Black children were not allowed to attend, and less importance was placed on educating girls. If there wasn’t any instruction available, some parents who were literate would teach their children, often only the boys. During the War of Independence, many schools were closed, so children attended “dame’s schools.” These were schools run by older women in their homes. As boys entered their teens, many went to work for a master tradesman as an apprentice for seven years. Others directly joined the work force or began college as young as age 12.

The Anglican Church was the main religious denomination, although there were also Baptists, Methodists and Presbyterians. The upper classes sat in the front of the church. Newspapers were composed of one sheet. There were about 40 in colonial days.

Tableware was usually made out of pewter, since most people could not afford silver. Cider was a very popular drink. People avoided drinking water because it was not purified.

Medicine and doctors were scarce. Most people relied on natural remedies of herbs, teas, honey, bark and roots. The medical practice of the day was to bleed people.

One good symbol for how different life was then: Salt was expensive. It clumped and had to be served in salt cellars, which you’d pinch some out of. Not until the 20th century would the Morton Salt Company of Chicago discover that by adding magnesium carbonate it could be made to flow.

Today, Americans can get a realistic look at what colonial life was like by touring Williamsburg in Virginia, or Old Sturbridge Village in Massachusetts. They’re living history museums, recreating what a town looked like in the 1700s, right down to actors portraying the various types of people found in the town.