The cock crows for Bishop Lynch of St. Petersburg. 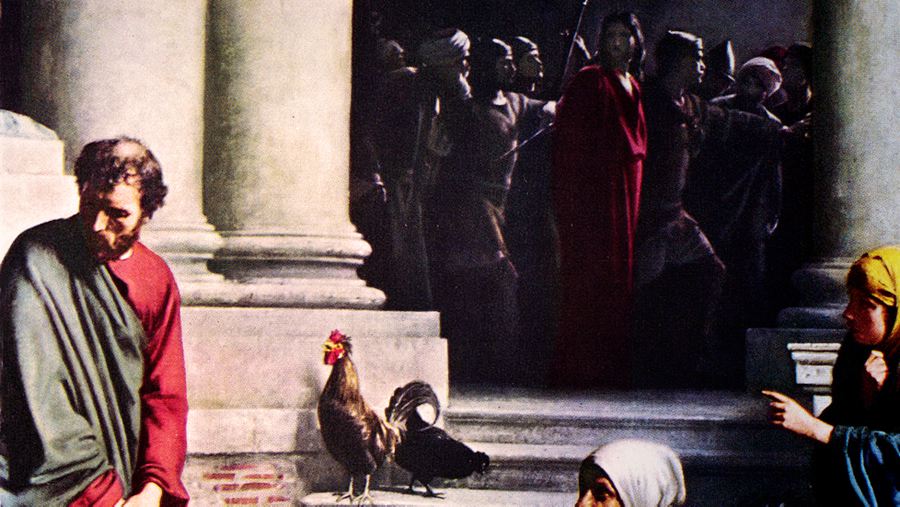 You need not turn to the ACLU or The New York Times to hear the Orlando jihad massacre blamed on “intolerant” Christian faith. If you’re a Catholic in St. Petersburg, Florida, then your very own leader preached such a message. That region’s Bishop Robert Lynch greeted the act of a Muslim terrorist by slandering the whole Christian tradition:

It is religion, including our own, which targets, mostly verbally, and also often breeds contempt for gays, lesbians and transgender people. Attacks today on LGBT men and women often plant the seed of contempt, then hatred, which can ultimately lead to violence.

After piously burning such incense before the idol of sexual politics, Lynch then bowed to the gods of religious multiculturalism:

Responding by barring people of Muslim only faith from entering the country solely because of their stated faith until they can be checked out is un-American, even in these most challenging of times and situations. There are as many good, peace loving and God fearing Muslims to be found as Catholics or Methodists or Mormons or Seventh Day Adventists.

We all know the ugly record of Catholic, Methodist, Mormon and Seventh Day Adventist leaders in seeking the death penalty for homosexual conduct, as Jesus demanded and practiced. Oh wait, that was that other religious leader, Muhammad, whose followers insist that he did that and who therefore go forth and do likewise — in Saudi Arabia and other Muslim countries today. All these religions— it gets so confusing. Even the professionals like Lynch get mixed up sometimes.

Our reaction to Lynch’s words was to thank God that we don’t live in Lynch’s diocese — whose Catholics are meant to treat Lynch as the heir of the Apostles. Those Christians, we think, should tithe with Monopoly money in the collection plate every week, until Pope Francis sees fit to send them a genuine Catholic bishop. Maybe on feast days they can splurge and drop in thirty pieces of silver, as a reminder of the mixed record of even the first crop of Apostles.

The Madness of Crowds

Speaking of them, in studying the Gospels and the early Church, one feeling always struck us: How blessed we were not to have lived in the Apostolic age. We have heard some people say, with pious intentions, that they wish they could have walked with Jesus and the Apostles. But would we have withstood the test? All the Apostles scattered upon Jesus’s arrest, and only John stood bravely at the foot of the Cross with Jesus’ mother, Mary. All the rest scattered and vanished, like chaff in the wind.

One had betrayed Our Lord outright, and hanged himself. We will never really know Judas’ motives this side of Judgment Day, when the scroll of each sinner’s misdeeds will be unfurled for all to see. And when that happens, few of us will be scanning anyone’s criminal record but his own.

More galling than Judas, perhaps, was Simon Peter, the “rock” among the Apostles, who cowered by a fireside from the confused and angry crowd, and denied Our Lord three times. Then the cock crowed, and he wept.

What motivated Peter? Was it no more than raw, ugly fear? He had proved himself bold in the past, that very night drawing a sword against the guards of the Sanhedrin. Catholic scholar and world-famous anthropologist Rene Girard thinks that something more complex and sinister was at work.

In an unsettling interview, Girard describes what he calls the “contagious evil of crowds,” like the crowd which would turn against Jesus when they saw Him bound up in chains, and replace Palm Sunday’s “hosannas” with “Crucify him! Give us Barabbas!” That meme went totally viral, until the only ones standing up for Jesus were John and Mary, and a few faithful mourning women. The rest were caught up in the raw, invigorating power of joining the “right” side of history, which Jesus’ failure to conquer decisively proved lay with Rome and those who served Rome, the skeptical liberal Sadducees.

As Girard warns us:

When you’re in a crowd you become literally possessed by the crowd. The crowd’s spirit is all powerful. Only Jesus can conquer it. … That spirit can conquer even Peter. It’s pretty disturbing if you regard it as a prophecy of the End Times — which it may well be. That is what we are now seeing, when people tell you that Christianity must be modern and follow the spirit of the time. What do they say? Follow the crowd. That’s why I think we must refrain from listening to these voices, however pious they sound.

So it’s under the sign of Peter, desperate to join that conquering mob, that we must interpret the teachings of the bishop of St. Petersburg. Bishop Lynch walks with his finger in the wind, and he knows which way it is blowing. He knows that there is no down side to damning the past, the Church, the Fathers, even the Gospels, in a world which has wearied of all those sturdy things. His words will win him praise from “community leaders,” and probably fat donations. Meanwhile, faithful bishops who speak out in defense of the Church’s teachings — such as Antonio Cañizares Llovera, Archbishop of Valencia, Spain — are being threatened with jail time on “hate crime” charges. They foolishly failed to heed the voice of the crowd, which now will go on to trample them.

But Peter’s story is also a hopeful one: He was shamed by the sight of the suffering Jesus and begged Him for forgiveness. He went on to lead the Church in Rome and died there as a martyr. His legacy is claimed by the largest Christian church as the font of its authority: Not bad for a second act.

Peter’s saving grace was that he proved capable of shame. Is Bishop Lynch? Time, and then eternity, will tell.