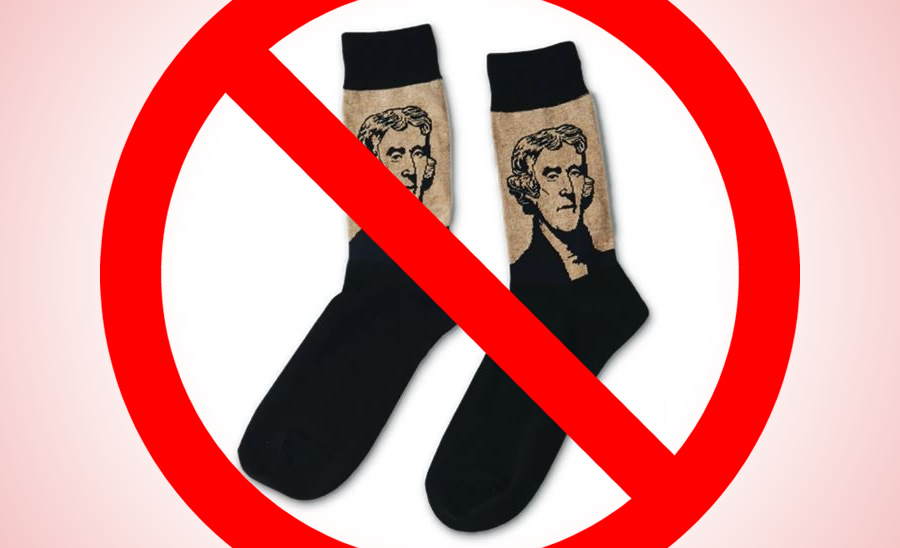 I have a confession to make, and it’s likely to get me fired. Or would get me fired if I didn’t work where I did.

About two weeks ago, I wore a pair of socks containing the face of Thomas Jefferson. I know. Horrible. Far worse than the Klan hood worn by Virginia’s current governor. I’m loathsome. As racist as any southern Democrat police chief in 1960.

As long as I’m confessing, I also have a t-shirt from Jefferson’s second home, Poplar Forest. It’s old and ratty now, used only for projects around the house. I figured that would still be safe to wear, because who could object to a Jefferson shirt getting covered in dirt and sweat and paint and mortar? Treated like a rag?

Foolish me. T-shirts not given a seal of approval by Mob Rules Matter are a no-go, too. No matter where you may wear them. Just ask Oklahoma State football coach Mike Gundy.

Mike Gundy was forced to apologize Tuesday. He expressed remorse for the “pain and discomfort” he has caused. What did he do? Was he parading around the practice field in a t-shirt made from the Confederate flag?  Was he wearing a mask around campus that read “I Support Officer Chauvin”? Did he post on Facebook, “Black Lives Matter as Long As They Block, Tackle and Run”?

No. He was photographed wearing a t-shirt from One American News Network (Commonly abbreviated as OAN). A shirt he was wearing on a fishing trip.

OSU star running back Chuba Hubbard was offended and threatened to effectively boycott the team. Other players rallied behind Hubbard. And this being 2020, Gundy was made to grovel. (Not that Gundy’s apology was enough for critics.)

The university president V. Burns Hargis, from atop a high horse, declared. “We will not tolerate insensitive behavior by anyone at Oklahoma State.” Wait until a conservative speaks at the school, we’ll see how just how much “insensitive behavior” from protesters Hargis tolerates.

So what is OAN and what’s the problem? OAN is a conservative news network and its opinion side is supportive of Trump. Which means, in the media’s eyes, the whole operation is Nazi. After all, anything to right of the anarchists and Marxists dictating life in Seattle is considered “far right.” And anything even remotely pro-Trump must be destroyed.

The White House Correspondents Association, which considers any tweet by Trump pointing out a media lie as an “attack on the free press,” even fights to keep OAN out of the White House briefings. This despite the fact the news operation of OAN is described by Don Kaplan of the liberal New York Daily News as “by far one of the most fair news outlets around, serving up a daily diet of ad-free, non-ideological, non-stop news — without smirking, snarky anchors or much fanfare.”

What a racket. The mainstream media gets to define and slander their fledgling competition, attempt to stamp out any embers of independent thought, and lets the cancel culture carry the ball from there.

OAN also reports on the reality behind the Black Lives Matter organization. (They know the difference between the preciousness of black life — black lives do matter — and the radical organization that claims the slogan. An anti-American, Marxist-led, anti-Semitic corporation that has as one of its goals the destruction of the nuclear family. A destruction, not incidentally, that has had a horrific impact on the black community. )

Read OAN’s straight up coverage of stories connected to Black Lives Matter. But because of sleigh-of-hand — reporting on the organization meets hating black people — OAN is branded racist.

And now, tossing on an OAN t-shirt while fishing makes you a racist, or at best “insensitive.”

Unfortunately, it won’t be enough to wear pre-approved t-shirts. You might also have to keep your hands in your pockets. Just ask Emmanuel Cafferty.

Your Knuckles are Racist

Emmanuel Cafferty was fired from his job at San Diego Gas and Electric. Why? For cracking his knuckles. About two weeks ago, Cafferty was out in a company truck when a stranger began following him. The stranger shot a photograph of Cafferty with his arm hung out the window. The image, as you can see, caught Cafferty’s hand making what up until recently was a harmless “OK” sign. 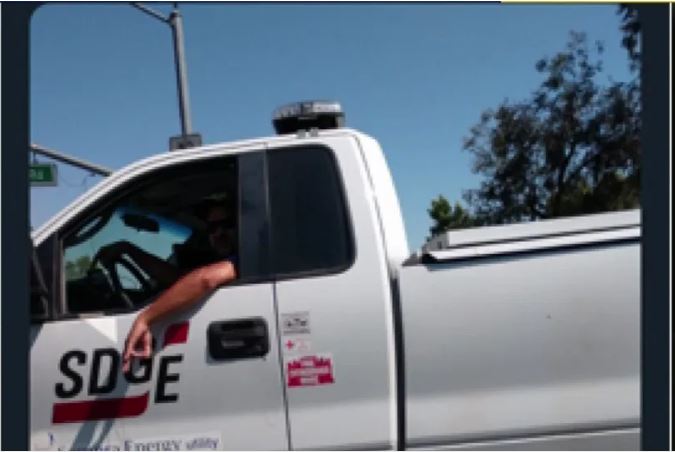 Suddenly the image is on Twitter, and Cafferty is accused of making a “white power” hand gesture. Next thing you know, Cafferty is canned.

Two points: First: As the Anti-Defamation League notes, the OK sign has long meant … OK. People still use it to mean OK. It shouldn’t be assumed to be a white supremacy symbol unless there’s other evidence to support the accusation.

Second: Cafferty insists he didn’t know the gesture is now used by some white supremacists. He was just cracking his knuckles.

“When my supervisor said that I was being accused of doing a white supremacist gesture, that was baffling,” Cafferty told San Diego’s NBC 7. “I don’t know how long it’s going to take me to get over this, but to lose your dream job for playing with your fingers, that’s a hard pill to swallow.”

We should also mention a third point: Emmanuel Cafferty is a person of color. He’s Mexican-American and says he comes from a diverse family of all races. Not someone to make a white power gesture.

And a fourth point: the tweeter deleted his account and admits he may have gotten it wrong, NBC7 reports.

I pray Cafferty will get his job back, or in the rebound economy an even better one. I pray average Americans can go to work or play without worrying whether their casual wear will get them canned. I pray the lunacy will end. (The Stream‘s Tom Gilson has posted the first of a series on how we can strategize against the lunacy. Please check it out.) We can’t stand still as sanity and liberty and free speech are pulled down on top of us.

We can’t keep our hands in our pockets. We can’t let our voices be silenced, as radicals take food off our table and the shirts off our backs.

“I have sworn upon the altar of God eternal hostility against every form of tyranny over the mind of man.” — Thomas Jefferson

The Fight for Independence Day 2020