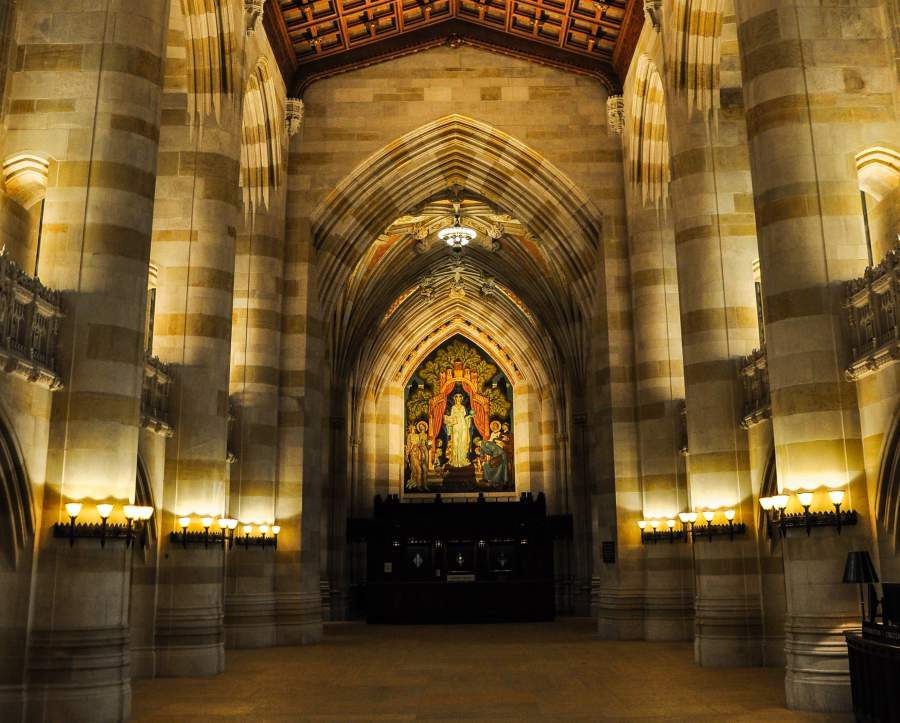 The main circulation desk of Yale's Sterling Memorial Library, topped by a figure of ... Yale.

On Wednesday night I took part in a fruitful but profoundly alarming discussion. In an online livestream, I joined three other Yalies: best-selling Christian author Eric Metaxas; dogged and much-abused Christian scholar Robert Oscar Lopez; and Yale ’19 survivor conservative Declan Kunkel. The topic: Can Yale and schools like it be saved? Also: Can attending them lose you your soul?

The occasion? A petition circulating among Harvard students to revoke the diplomas of known Trump supporters. That’s right. These thin-skinned little Stalinists think they can get away with that. In a world where lawyers are trying to get Senators Ted Cruz and Josh Hawley disbarred, it’s best to laugh nothing off as impossible.

Before 2020, if I told you what would happen at Twitter, then happen to Parler, would you have believed me? So don’t console yourself by scoffing. We’re in the midst of a great Awokening. Of mass conversions to a new and false religion. This creed steals what morals it has from the Christian Civil Rights Movement. But it splices them into its own nihilist, Darwinist DNA.

The Woke Beast Slouches Toward Bethlehem

The Frankenstein monster resulting is neither slow, sluggish nor stupid. In fact, it’s busily conquering every bastion in the West, from the sniffy heights of Harvard to the crowded shelves at Kohl’s, even pausing to castrate Mr. Potato Head. (Though it looks like the spud may have been given a temporary reprieve.)

This religion of the antichrist has swamped the Vatican, the EU, the UN, and the US Catholic bishops. Even now it is trying to conquer evangelical colleges and seminaries — in the sheep’s clothing of “critical race theory,” i.e., Marxism in blackface and stubbly, bad drag.

In the course of the discussion, I called what’s arising at places like Yale the “new Puritanism,” but that’s not really fair. The Puritans meant well. In a howling, hostile wilderness, after suffering persecution, they were making an honest effort at building a Christian society. And made some mistakes.

The new Puritanism of the Woke creed takes the soulless materialism of godless Western elites, then tries to pretty it up with Pharisaical pantomimes. All the two movements really have in common are the witch trials, and the informers. Imagine a Christianity with sin but no forgiveness. With the cross but no empty tomb. With reprobation but no redemption. A grim creed, but at least it doesn’t impinge on anyone’s sex life.

That’s what’s bubbling up from our universities and raining down like brimstone. And here we sit in Pompeii.

Can We Stand Being Ruled by These People?

What should we as Christians, perhaps as parents, and as citizens, do about such institutions? Watch the discussion itself below:


Drawing on his wonderful new memoir, Fish Out of Water, Eric Metaxas tried to locate the moment when Yale really lost its soul. He suggested that it might have been in the 1920s, when the school blew off the idea of building a grand new chapel. And canceled required attendance at Christian services. And instead of the chapel built a grand and glorious library, designed to look like a parody of a medieval cathedral. I myself have automatically genuflected at its main circulation desk, and placed calls home in phone booths built to look like confessionals.

Metaxas suggested that we try to hold such schools to their own stated ideals of free inquiry after truth, and show up how woefully their leaders have abandoned them. In favor of … what? Of keeping a campus full of coddled crybaby snowflakes from marching on the president’s office too often, and garnering bad press.

In other words, Yale is a brainless, multi-billion dollar Leviathan, lurching from crisis to crisis, boldly crying, “Uncle!” Hence it might well be a place where Christians should simply never send their children. Nor indeed, wise stewards of money, if the school even considers making hard-earned diplomas into revocable licenses that the school can cancel retroactively at will.

Learn to think of college as like a colonoscopy. You want to get it over with as quickly and painlessly as possible.

Robert Oscar Lopez recounted how he himself was “cancelled,” airbrushed from Yale history — including of a national ethnic club he founded there — after his life choices (including a Christian conversion) ceased to fit the Ivy League narrative. He also laid out the steps that leftist inquisitors take to target and destroy conservatives like him in academia, even those with tenure. As a one-time gay left-winger, he wondered aloud where the free-spirited iconoclasm of his fellow liberals went, and how they became an army of marching, uniform scolds.

I spoke more to the broader issue of the threat such aWokened elite institutions pose to the rest of society. We ought to be ready and willing to use the power of the government to hurt them financially. Cut off government funding, threaten their tax exemptions, and to treat them as institutional enemies — Planned Parenthood with stained glass and gargoyles. Mock and undermine their increasingly undeserved prestige. Most of all, reduce the cash-value of diplomas from such schools. I revisited an argument I’ve made here at The Stream. In “Stop Hiring Yalies” I offer one way to do that.

The reason that firms hire such students is that they imagine they will be good and useful employees, with fine brains and disciplined work habits, who will benefit their companies. This is no longer true.

The students at Yale who were so offended by a professor’s wife’s plea to chill out about “offensive” Halloween costumes that they claimed that she made them feel “unsafe” are not people you want around your company. They will be prickly, thin-skinned, self-indulgent and worst of all, litigious. They will flout orders, whine, back-stab, and then when you have to fire them, they will threaten to sue you, and bad mouth your company for years. So don’t hire them in the first place.

After the livestream was over, I fell into arguing with a friend: Should faithful Christian parents even consider schools as aggressively secular as Yale? (Which is to say, almost all of them.) Is the prospect of prestige gained, and greater impact and wealth your child might use for good, even the Gospel, worth the attending risks? Or is that like sending your 18-year-old daughter to live in a brothel as a missionary, in the hope that she’ll stay strong? Remember that your kid won’t be interacting with simple, innocent pagans, but people steeped in cynical post-Christian ideology, vaccinated against the Truth.

My instinct is to say, “No.” For ten years I edited a college guide for conservative, faith-based parents: Choosing the Right College. Then we stopped even publishing the guide, in part because there too few good choices left. Yes, there’s a small, shrinking list of schools that assertively embrace patriotism, natural law, even the Christian worldview. They’re enough to accommodate maybe 10,000 high school grads in total, across the country. What should the rest of us do?

I suggest finding the cheapest, closest public university where your student can 1) live at home with you, 2) graduate debt-free or close to it, and 3) avoid “campus life” and the “college experience” almost completely. Why spend $50,000 per year for your kid to attend Sex, Beer, and Socialism Camp? Learn to think of college as like a colonoscopy. You want to get it over with as quickly and painlessly as possible.

Or better yet, make sure he gets a real liberal arts education in his teens, via a “classical Christian” home school. Then urge him to find a trade like plumbing, carpentry, or installing electrical wiring. My high-school grad nephew who became a certified electrician was out-earning me, with my Yale degree and Ph.D., by 26 years old. And he never had to step over boys on the library steps in a “gay kiss-in,” nor spend a semester in a small, stuffy room wondering if Naomi Woolf would ever let the instructor speak.