Can conservative Jindal follow in the footsteps of liberal Jimmy Carter, another Southern governor, who came out of nowhere to win his party's nomination and become president? 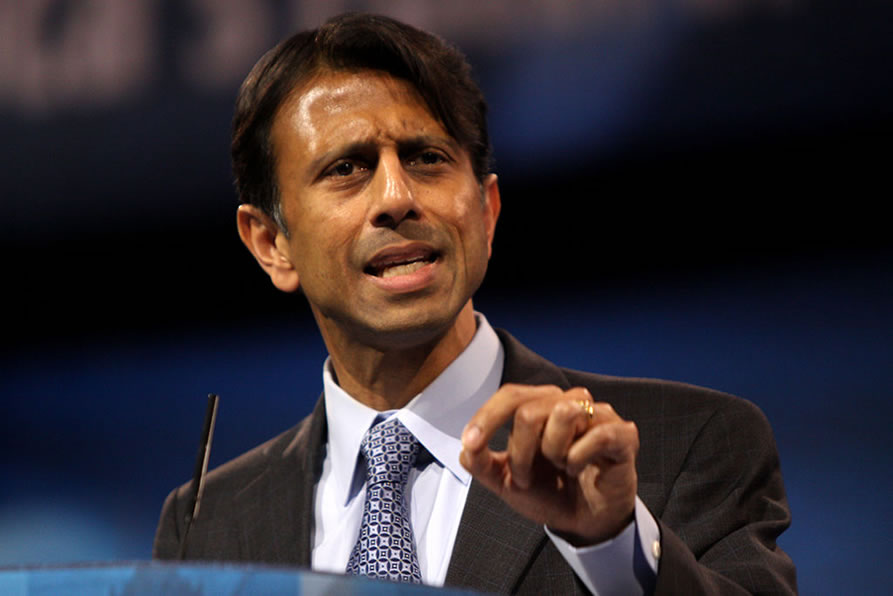 Republican Bobby Jindal, the governor of Louisiana, formally announced his candidacy for president at the Pontchartrain Center in Kenner yesterday, becoming the 13th GOP candidate in the race. He came out swinging, with jabs directed at President Obama, Hillary Clinton and his fellow GOP candidates. After his wife introduced him, he spoke of his upbringing by immigrant parents, his record as governor and how he intends to change Washington, D.C.  He also defended the role his faith plays in his public life. “I know that some believe I talk about my faith too much,” he said. “But I will not be silenced. I will not be silenced to meet their expectations of political correctness. They don’t accept the idea you can be both intellectual and Christian … smart and Christian. They need to get out more.”

Both socially and fiscally conservative, Jindal appeals to the conservative base of the GOP. As the first Indian-American governor in the nation, he also appeals to minorities. However, with so many conservative and minority candidates already in the race, it may be difficult for him to make significant inroads into those votes.  He is averaging 15th in polls of all the GOP candidates, even behind Lindsey Graham.

Jindal’s parents emigrated from India to Baton Rouge six months before he was born. His father grew up in a two-room shack, one of nine children and the only one in his family to make it past fifth grade. Jindal was raised in the Hindu faith and converted to Christianity as a teenager. He wrote articles for the New Oxford Review about his spiritual journey, and now identifies as an evangelical Catholic.

Jindal graduated with honors from Brown University, obtaining degrees in biology and public policy. He was accepted to Oxford as a Rhodes Scholar, where he earned a Master of Letters in political science. He started his career working on state policy, primarily in healthcare. He became president of the University of Louisiana System and was appointed by President George W. Bush as principal adviser to Tommy Thompson, the U.S. Secretary of Health and Human Services.  He also served as Secretary of the Louisiana Department of Health and Hospitals, where he took Louisiana’s Medicaid program from bankruptcy and a $400 million deficit into three years of surpluses totaling $220 million.

Jindal was elected to Congress in 2004, and reelected in 2006. He ran successfully for governor in 2007. Under his leadership, Standard and Poor raised the state’s credit rating from stable to positive in 2009. During his second term, he was awarded the Thomas Jefferson Freedom Award for “outstanding public service” by the  American Legislative Exchange Council (ALEC). He cut taxes six times while governor, including the largest income tax cut in Louisiana’s history. In 2013, he unsuccessfully attempted to eliminate the state’s income tax.

He received a respectable B from the fiscally conservative Cato Institute last year. However, three “Fiscal Hawks” in the state legislature have labeled him a big spender. Rep. Cameron Henry said about Jindal in 2013, ““No, he’s not a true conservative on fiscal matters. It’s not fiscally responsible to spend one-time money on recurring expenses.”

The Pulse 2016, which tracks presidential candidates on the issues, rated Jindal an A for his handling of the Indiana religious liberty bill controversy. He “quickly defended Indiana, pointed out that Hillary Clinton once supported a similar federal RFRA, and also specifically defended the right of Christian (and Muslim) bakers, florists and wedding photographers to make a living.” As governor, he issued an executive order protecting those who do not support same-sex marriage.

Jindal signed a law permitting the teaching of intelligent design in public schools, has a 100 percent rating from the National Right to Life Committee, and a strong record of supporting the Second Amendment. He expanded school vouchers and almost doubled the number of charter schools in the state. After first implementing Common Core, he reversed course and is now one of its most outspoken opponents.

He opposes amnesty for illegal immigrants and has said he will repeal Obama’s “unconstitutional executive orders” providing amnesty for those who came to the country as children. As an immigrant, he hasn’t been shy to speak up about the need for immigrants to assimilate. “And I’m also making a bigger and maybe even more controversial point that radical Islam is a grave threat, we need Muslim leaders to denounce the individuals, not just the acts of violence,” he has said, adding that “it is absolutely correct to insist on assimilation” of immigrants in the U.S.

He has been critical of global warming alarmism, but has more of a moderate record on environmental issues, due perhaps to Louisiana’s location off the Gulf of Mexico near offshore oil drilling. In 2009, he was selected to give the Republican response to Obama’s first joint address to Congress. Some thought his delivery was awkward, the end of the peak of his rising status within the party. He hunts and wears cowboy boots, and has photos of himself with his three children all dressed in camouflage.

Can Jindal move past long-shot status?

Jindal is lacking in substantial campaign money, which is why we haven’t heard much from him. He’s gradually moved advisers from his gubernatorial staff over to his presidential campaign, and hired some former RNC staffers, but he won’t be able to fully devote himself to the race just yet since he is still governor through the end of the year.

He recently placed 14th out of 16 in a poll of likely Iowa Caucus GOP voters, and says he’s going to focus his main efforts there. Jimmy Carter was a little-known, one-term Southern governor who came out of nowhere to capture the Democratic nomination and become president by working the Iowa Caucuses. Jindal points out that when he first ran for Louisiana governor, he performed very poorly in early polls. His story as an Indian son of immigrant parents is inspiring, his conservative principles are almost flawless and he is generally an excellent speaker. Additionally, Quin Hillyer, a conservative columnist in Louisiana, said, “It is crazy to underestimate his doggedness or his political skills.”

Yet without much money, polling this low in the race and facing a broad field composed of mostly conservatives like himself, Jindal faces an extremely high hurdle. Perhaps the governor, just turned 44, has his eye another prize — vice president, a White House cabinet position or the 2020 presidential race.

In November, a Blue Wave Is Unlikely. A Blue Ripple? Maybe.