Comparing the reaction to the killing of Osama bin Laden with his al Qaeda successor, Ayman al-Zawahiri. 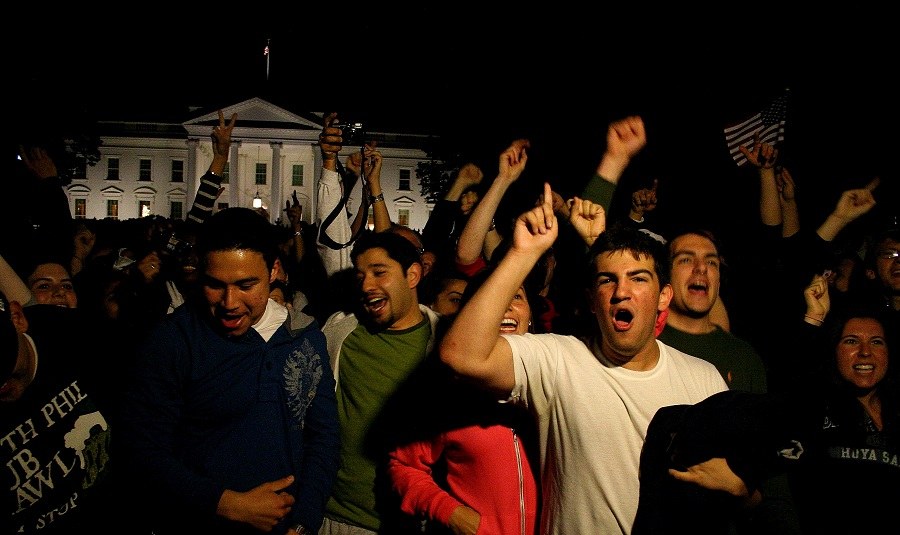 Americans celebrate the U.S. military's killing of Osama bin Laden in front of the White House on the night of May 1, 2011.

The killing of Osama bin Laden ignited a bipartisan celebration that briefly united almost all Americans. The recent death of his right-hand man and al Qaeda successor, Ayman al-Zawahiri, did not.

Why the disparity? Is it because eleven years after bin Laden’s demise, Zawahiri didn’t carry the same name recognition despite his central role in planning the 9/11 attacks? Perhaps, but I would like to offer an alternate explanation to consider. Most Americans didn’t come together to celebrate this top terrorist’s death because America isn’t presently capable of coming together.

Like his former al Qaeda boss, Zawahiri wanted to kill as many Americans as possible, regardless of their backgrounds or beliefs. Therefore, there is no reason for Republicans and Democrats to react differently to his death. This was a moment where all Americans could rejoice in knowing that a man responsible for the murders of thousands of Americans on 9/11 and countless other terrorist attacks was finally brought to justice after a two-plus decade manhunt.

Al Qaeda leader Zawahiri has been killed in a CIA led air strike.

Zawahiri is credited in planning 9-11 & attack on the USS Cole, but most Americans don’t know or have forgotten who he is, but once they know they will be glad he’s dead.

But Joe’s victory lap is ridiculous.

This is not about agreeing or disagreeing with President Biden’s policies. It’s about a political climate where indisputably good news cannot be allowed to spread for even a few hours before political attacks are launched.

Over on the left, MSNBC host Medhi Hasan used Zawahiri’s death as an opportunity to attack former President Donald Trump and Fox News host Tucker Carlson. After blasting President Trump and the rival cable news commentator for attending a “Saudi-funded golf tournament,” Hasan went on to joke that he’s “gotta hand it to the guys in the writers’ room. Didn’t see this one coming.”

The timing of Biden killing Zawahiri days after Trump and Tucker yukked it up at a Saudi-funded golf tournament where Trump said he was still trying to get to the bottom of 9/11 was…well…oof.

Gotta hand it to the guys in the Writers’ Room. Didn’t see this one coming.

Of course, the killing of Zawahiri wasn’t drawn up in a “writers’ room.” It was planned primarily at CIA Headquarters, which I had a chance to visit last year. While at Langley, I met some of the finest intelligence professionals our country has to offer, all of whom had made untold sacrifices to defend this country from very real threats. While I don’t think Hasan meant to insult these heroes, we shouldn’t minimize the dangerous work of our intelligence and military communities while confronting evil in a post-9/11 world.

Back in 2011, I happened to be landing at Washington Dulles International Airport just as the bin Laden news broke. What I felt that night was a real sense of bipartisan joy and pride in America, even though I was in the country’s most political place. While I wasn’t in Washington this past Monday, I had a completely different feeling with the exception of reading tweets by respected intelligence professionals and 9/11 victims’ family members. Instead of a bipartisan moment, I felt like Zawahiri’s death was just another talking point for politicians and cable news pundits.

While growing up in the D.C. area, I vividly remember moments like the Challenger explosion, the fall of the Berlin Wall, the Oklahoma City bombing and of course, 9/11. Outside of the collapse of Soviet communism, those aforementioned moments were all tragedies. In the ensuing days, however, it felt like America was a family and that we would all get through it together. Can anyone honestly say they feel the same way in 2022?

Many of our nation’s leaders and media figures share responsibility for plunging this country into a dark period where Americans feel at odds with one another. Were there to be a true national emergency or God forbid, another major war, I am deeply concerned about whether we could come together like the Greatest Generation did during World War II.

Politics aside, this country needs another leader like Abraham Lincoln, Franklin D. Roosevelt, John F. Kennedy or Ronald Reagan. It also needs more politicians and pundits who try to turn partisan temperatures down instead of through the roof. Unless and until a more responsible era of leadership sets in, the word “bipartisan” might indeed be a thing of the past.