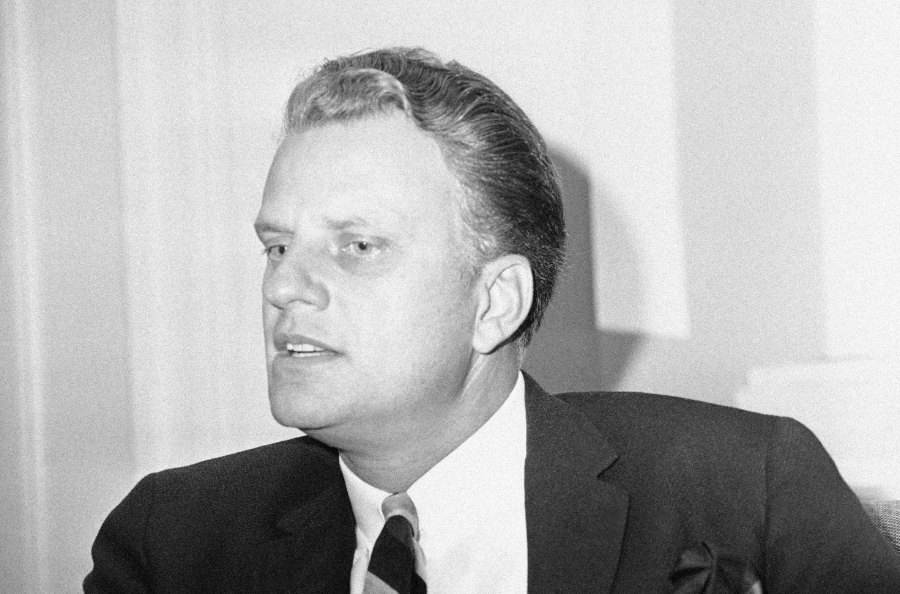 Billy Graham speaks to a journalist on June 12, 1962. In the same year he warned that American freedom "will evaporate if the religious foundations upon which it has been built are taken away."

Thanksgiving is one of the most special family times of the year. The roads are packed with travelers, and the airlines are at full capacity as grandparents and parents and children and relatives journey across the country to spend a few days together. And that leads me to reflect on a very simple question: Is America more family-friendly today than it was in the fairly recent past? Are we, in 2018, more innocent or less innocent than we were, say, in 1962?

The opening lines of a 2012 article in the Saturday Evening Post say it all: “How much has America changed in the past 50 years? Imagine kids in American public schools now starting each day with a prayer.”

Without a doubt, America was far from perfect in the early 1960s. In much of the nation, segregation was the law of the land and women certainly had far fewer opportunities than men, just to mention two of society’s most glaring inequities. And it’s true that the first issue of Playboy, featuring Marilyn Monroe in the nude, was published in 1953.

At the same time, there’s no denying that America back then was a far more innocent, family friendly country than it is today.

What We Enjoy, Then and Now

And so, 50+ years ago, when we sat together and watched Leave It to Beaver, we didn’t say to ourselves, “How corny! There’s not a family in the nation like the Cleavers.” Instead, it was as normal to us as it was entertaining (at least, it seemed normal to many of us growing up in many parts of the country).

In a word, Americans in the late-1950s to early-1960s enjoyed watching Father Knows Best and The Andy Griffith Show. Today we enjoy watching Keeping Up with the Kardashians and Secret Diary of a Call Girl. (For the record, in contrast with Bruce-Caitlyn Jenner, the patriarch of the Kardashian family, Robert Young, who played the father on Father Knows Best, was never crowned “woman of the year.”)

What happened to our nation? How did things change so radically? Is there a spiritual answer that compliments the many valid, sociological answers?

Allow me to present a spiritual perspective.

The Ruling Against Prayer

For many years, this 22-word prayer had been prayed corporately by millions of schoolchildren: “Almighty God, we acknowledge our dependence on Thee and beg Thy blessing over us, our parents, our teachers, and our nation.”

In religious terms, it was generic (a Jewish child could say the words as readily as a Christian child), and the child of an atheist could choose to remain silent.

Still, without any clear legal precedent, the Supreme Court ruled against the prayer, and that has been the law of the land ever since.

What did Billy Graham have to say about this?

Early in 1962, he warned readers of the Post, “The issue of prayers in public schools is now before the Supreme Court and, if the Court decrees negatively, another victory will be gained by those forces which conspire to remove faith in God from the public conscience.

“American democracy rests on the belief in the reality of God and His respect for the individual. Ours is a freedom under law. But it is also a freedom that will evaporate if the religious foundations upon which it has been built are taken away.”

He believed that the attempt to remove school prayer was part of “a movement gathering momentum in America to take the traditional concept of God out of our national life. If this movement succeeds, IN GOD WE TRUST will be taken from our coins, the Bible will be removed from our courtrooms, future Presidents will be sworn into office with their hand on a copy of the Constitution instead of the Bible, and chaplains will be removed from the Armed Forces.”

He also argued, “The Preamble of our national Constitution speaks of ‘the blessings of liberty.’ The men at Philadelphia could never have written that document if they had not had faith in God.”

Has It Gone As He Said?

On the one hand, Presidents still swear on the Bible when taking their oath, Bibles are still present in our courtrooms, IN GOD WE TRUST is still on our coins, and chaplains are still in our Armed Forces.

On the other hand, our essential Christian freedoms are under constant assault, and in spirit, the Bible is being increasingly removed from our courtrooms.

But there is a solution, and it is not found in simply bashing those who differ with our views.

As for our Armed Forces, could Rev. Graham have imagined a military that paid for sex-change surgery for transgenders and that penalized chaplains for refusing to facilitate a same-sex “marriage”? And how about this for a headline? “Religious Freedom of Military Chaplains Under Attack for Event Saying Religious Freedom of Military Chaplains Is Under Attack.”

In my view, Billy Graham was absolutely right in describing “a movement gathering momentum in America” which desired “to take the traditional concept of God out of our national life.”

Demonstrate the Beauty of our Faith

But there is a solution, and it is not found in simply bashing those who differ with our views. Instead, if each of us who claims to really know the Lord can demonstrate the beauty of our faith to a watching world, we can show the nation that God, in fact, has a better way.

Let’s do it during this holiday season, let’s continue through the end of the year, and let’s make 2019 a year when millions of Americans see our faith and are provoked to turn to the Lord themselves.

Only a vibrant, consistent, holistic, life-giving movement like this can turn the negative tide.

(Several paragraphs from this article were excerpted from Michael L. Brown’s book, Saving a Sick America.)

The Battle Is Ugly, and It’s Ramping Up Fast. Fight On, With Hope!