John Durham, who has previously prosecuted FBI hot shots who went astray of the law, is on the case. 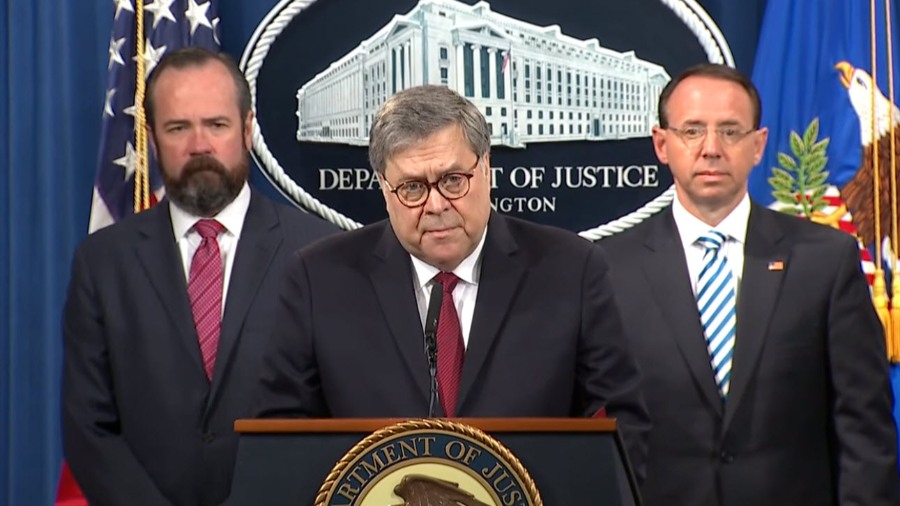 In momentous news, Barr has just appointed U.S. Attorney John Durham of Connecticut to investigate the origins of the FBI Trump/Russia probe “Crossfire Hurricane.” This means Barr suspects something criminal took place, as opposed to just bad policy or poor decision-making. It will be Durham’s job to determine whether the government’s methods of collecting intelligence related to the 2016 Trump campaign were “lawful and appropriate.”

Was There Legal Justification?

The big questions that must be answered: Sure, we needed to look into Russia’s interference in our elections, but when and how did then-candidate Trump and his campaign get included in that? Was this political weaponization of the intelligence community? If so, how high did it go?

Barr’s decision to appoint an investigator really shouldn’t surprise anyone who heard his testimony before the Senate Judiciary Committee, as he made it clear that he was concerned about the spying (yes, spying) he knows took place.

Barr’s decision to appoint an investigator really shouldn’t surprise anyone who heard his testimony before the Senate Judiciary Committee, as he made it clear that he was concerned about the spying (yes, spying) he knows took place. Specifically, whether or not there was legal justification for it. It’s through this appointment that he’s going to find out. Durham joins U.S. Attorney John Huber in Utah, Inspector General Michael Horowitz and Sen. Lindsay Graham of the Senate Judiciary Committee, who are already looking into various aspects of this issue.

It occurs to me that it might be good that Barr appointed a U.S. attorney rather than a special counsel, as the latter can go on and on (as we have seen) and take years to issue a report.

Who is Barr’s Appointed Attorney?

But who is John Durham, and what does he bring to the table? We’re hearing the same sort of words that were used to describe Barr: “straight-shooter,” “professional,” “independent,” “a bulldog.” Ken Starr calls him “a brilliant choice … perhaps the most respected prosecutor in the United States … a really honest cop on the beat.” He’s a career agent; according to the Washington Times, he’s worked at the Justice Department since 1982, which may in itself not be so good. He investigated alleged improprieties at the CIA in 2008 — the destruction of videotapes showing torture of terrorism suspects — and that probe ended in 2010 with no charges being filed.

According to Karl Rove, “He is a tough guy. He took on the FBI who were protecting [mobster and informant] “Whitey” Bulger. He went after and convicted and sent to jail the governor of Connecticut, a Republican named John Roland. He’s a straight arrow, and I think this is a great move by Attorney General Barr. Hard to criticize a guy who is apolitical and has served in Republican and Democratic administrations.”

One of our go-to legal experts, Andrew C. McCarthy, knows Durham well, and here’s what he told Shannon Bream on FOX News Monday night: “He’s a terrific lawyer, very accomplished prosecutor; I think he’s somebody who has a lot of respect from people on both sides of the aisle … He’s not a partisan guy; he’s a no-nonsense professional prosecutor. He’ll do a good job.”

The Investigation Will Show

McCarthy said there are two levels of decision-making on an investigation such as the FBI’s to look into “Russia”: 1) Is there enough “smoke” to warrant investigating this, or at least to “kick [it] around a little bit?” and 2) Do we have enough evidence to warrant sending in informants, using the FISA court, or are we “pushing the envelope” too far in using those techniques? If there was justification for doing these things, McCarthy said, then the investigation will show that. Or it there wasn’t, it won’t.

Former FBI Director “Cardinal” James Comey may have a lot to answer for. Rod Rosenstein, for one, has already responded to Comey’s recent trashing of him as lacking in “strong character,” accusing Comey of crossing lines he shouldn’t have. Since leaving his post as deputy attorney general, he’s quickly become outspoken. Here’s a bit of what he said in Baltimore Monday night: “I do not blame the former director for being angry — I would be, too, if I were in his shoes — but now the former director seems to be acting as a partisan pundit, selling books, earning speaking fees, while speculating about the strength of my character and the fate of my immortal soul. I kid you not. That is disappointing. Speculating about souls is not the job of police and prosecutors. Generally we base our opinions on eyewitness testimony.”

Good one. Wow, his criticism of Comey sounds like something we would have said here (and essentially have).

Only on Planet Comey

Comey must really enjoy listening to his own voice on CNN, as he even trashed Barr. “It doesn’t make me happy to say this,” Comey said, “but I think he has lost most of his reputation with the way he’s conducted himself.”

Only on Planet Comey is this true. In fact, Comey really should be looking in a mirror when he says those words, because if anyone’s reputation is shot, it’s his own. In contrast, Barr will go down as one of the few people in this story who were consummate professionals.

Recall that it was Comey who signed the original FISA application to spy (yes, spy) on Carter Page. We’ve just learned, through a memo sent to the FBI by State Department official Kathleen Kavalec, that information about Christopher Steele’s strong political motivations had been communicated to the FBI ten days before they used his dossier for that FISA application. Actually, Rosenstein signed off on the third renewal of that application, so he might be in some hot water, too.

Rep, John Ratcliffe of Texas, a former federal prosecutor, is calling specifically for an investigation of Comey as potentially violating the Espionage Act (you know, the law we know Hillary definitely did break). This would be for recording, in written notes, his conversation with President Trump in the Oval Office and then intentionally leaking that information — by definition classified and not his property to share — with someone who would, in turn, leak it to The New York Times and trigger a special counsel appointment. Ratcliffe said on Monday’s Hannity that the FBI agents he talks with don’t use words like “proud” to describe their feelings about what has been going on with the Bureau — more like “embarrassed” and “ashamed.”

According to Trey Gowdy, Lindsay Graham is trying to bring to light the internal FBI memos and “302” notes discussing Christopher Steele as a source. This is material that Gowdy has seen, plus Graham, Ratcliffe and that select group that has clearance to view it. He says that what will emerge about the FBI’s conduct is even worse than what we currently know. “In addition to the withholding of exculpatory evidence … they made no effort to corroborate the dossier until after it had been used in the application and a renewal … whoever’s investigating this, tell them to look for emails between Brennan and Comey in December of 2016.”

That sounds like a pretty big clue. I have a feeling John Durham is on it.

At Last, Lt. Gen. Michael Flynn is Getting the Defense He Deserves

Some Moral Reflections on the Mueller, Manafort, Cohen, Trump Affair