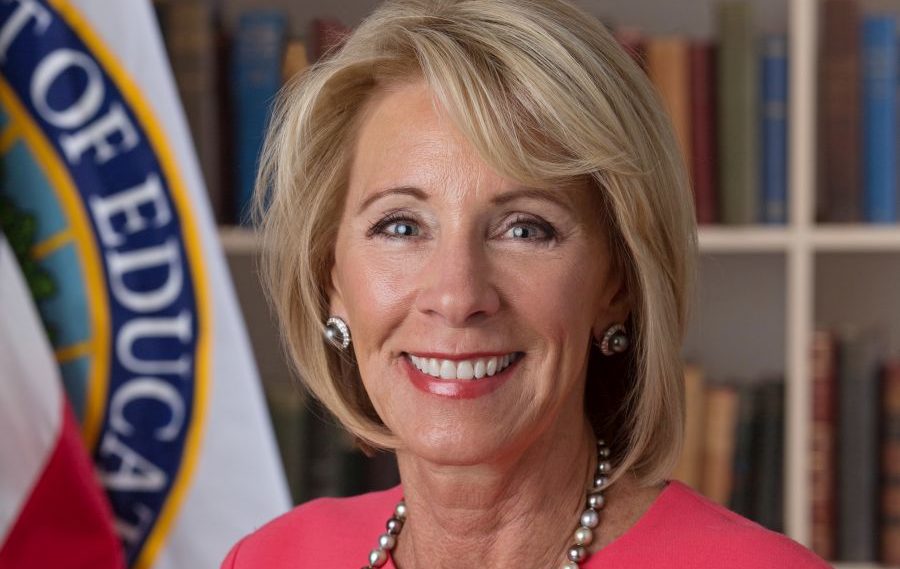 Among the swag I brought home from Acton University 2022 was Betsy DeVos’s outstanding new book. It’s a real page turner. It unpacks her humble roots. It explains her parents’ commitment to hard work, family and community service. It shows how her Christian faith informs her lifelong effort to serve low-income families. DeVos’s well-earned reputation in advocating for school choice led to her appointment as Secretary of Education in the Trump administration.

But President Biden is trying to undo some of the Title IX changes DeVos put in place.

I’ve written about how DeVos delivered major changes to Title IX policy. To summarize, let’s remember what she inherited. In 2011, the Obama administration sent colleges a pointed letter. Written by unelected officials, it spelled out big, bad consequences for colleges that didn’t put their thumbs on the scale on behalf of accusers. In other words, it watered down the due process rights of the accused.

By issuing a new Title IX regulation, she ensured that any future administration would need to do likewise to reverse her update. It’s a time-consuming and complicated process.

The letter defined sexual harassment as an even a one-time unwanted action that the accuser considered sexual. It allowed a single college administrator to serve as the prosecutor, judge and jury on a case. It said that a single instance of harassment could result in a university being labelled a hostile environment. Colleges were asked to discourage cross-examination of the accuser. Finally, they were asked to use a lower threshold to determine guilt. In fact, the accused didn’t even have to be told the allegations before being declared guilty.

DeVos noticed that accused parties, after being found guilty on campus, were suing their universities. And about half the time, winning. Remember the Rolling Stones article that went viral — and then had to be taken down when the accuser’s story fell apart? The magazine had to settle lawsuits with the fraternity and the university. Or the Duke University lacrosse players’ scandal? Each accused man was later exonerated.

Even in cases that went the other way, DeVos reasoned, follow-up trials were emotionally difficult for the injured party. The system was bad for everyone.

DeVos could have just pulled back the Obama-era letter. But that would have left the colleges guessing as to what they were supposed to do. DeVos wanted a more permanent fix. By issuing a new Title IX regulation, she ensured that any future administration would need to do likewise to reverse her update. It’s a time-consuming and complicated process. DeVos became the first secretary of education to ever issue a new regulation under Title IX.

Here’s some of what she updated. Colleges must start with the presumption of innocence. Sounds basic — but the Obama letter hadn’t done that. Colleges must provide all relevant evidence to both sides at least 10 days prior to requiring a response. They must conduct live hearings with cross-examination, record these hearings, and make these recordings available to both sides.

Colleges were given until mid-August 2020 to put these changes into effect. But it’d only be a few months until a new White House occupant would announce a retreat from the DeVos guidelines.

In March 2021, President Biden announced a review of the Trump administration’s regulation. Last Thursday, Biden released his proposed changes, inviting public comment. As DeVos describes, this starts a process where anyone can suggest changes to any part of the proposed regulation. The Department of Education has to reply to every comment it receives.

Here’s some of what’s proposed:

This doesn’t pertain to sports teams — that’s handled separately. But it would be the first time that gender identity is equated with sex within Title IX. I’m not sure people realize that they are erasing women from a statute designed to protect them. There is no end to the mischief or perceived harassment that could be legally pursued under this guise.

Without something being objectively offensive, how do you know if it’s just an odd impression? With as little as one data point? Joe asks Sarah out for an evening drink. She declines. Is that “unwelcome sex-based conduct”? Do we assume he wanted sex?

This one investigator is effectively the prosecutor, judge and jury. Where else in our legal system do we do anything that crazy?

There are good reasons why cross-examination is a central aspect of our legal process. As Proverbs 18:17 puts it, “The one who states his case first seems right, until the other comes and examines him.”

The bad news? Stakeholders are tired of the ping-pong back and forth over the last three administrations. The good news? Because Secretary DeVos went through a brutal process to implement her regulation — it took 2.5 years — it will be every bit as complicated for President Biden’s team to undo it.