A Beautiful Mind: John Nash Versus the Left

Nash’s decisive contribution to game theory likely has in its blood line Austrian economics, a school opposed to the easy money Fed policies that contributed to the housing crash and Great Recession. 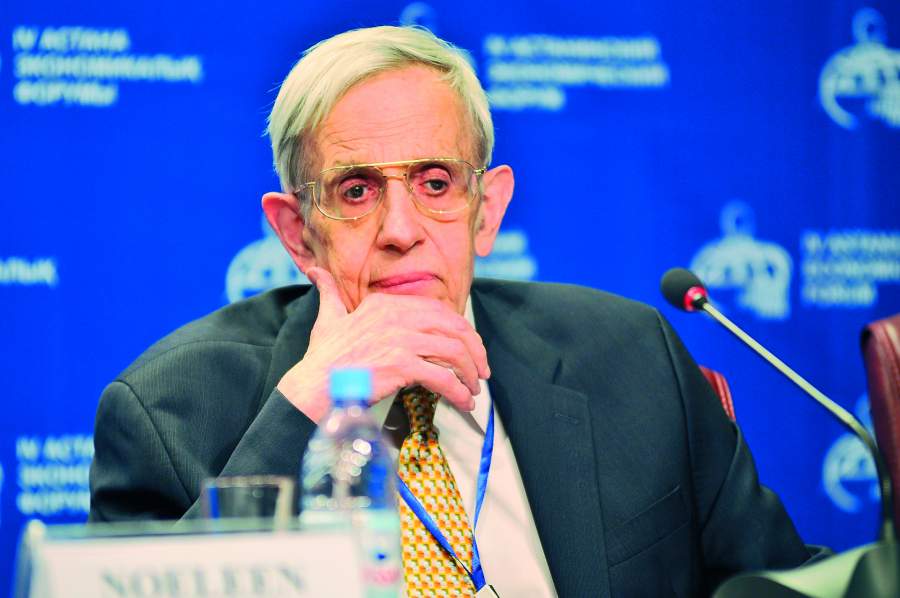 John Forbes Nash, Jr., the mathematician whose life inspired both the Pulitzer Prize winning book A Beautiful Mind and the Academy Award winning film of the same name, died Saturday in a taxi crash along with his wife Alicia. Nash won the Nobel Prize in economics for his revolutionary contributions to game theory, a branch of mathematical economics focused around modeling conflict and cooperation among rational, intelligent decision-makers. Game theory has influenced everything from economics and political science to psychology and business management.

My older son’s college psychology class was assigned the film about the ground-breaking economist and schizophrenia sufferer last year. The assignment was to watch the film, dig into Nash’s biography and report on how the film altered Nash’s story of mental breakdown and recovery.

We watched the film together as a family (my second viewing), read the biography by Sylvia Nasar, and discussed Nash and game theory at the family dinner table over the next several days.

An additional motivation for the interest was that my mom’s engineer brother, my Uncle Milton, was a classmate of Nash’s at Carnegie Tech in the 1940s, with the two reconnecting at their 50th college reunion. In our digging into the Nash’s biography, we learned something of particular relevance to proponents of limited government, something I probably should have known already but didn’t: Nash’s decisive contribution to game theory likely has in its blood line Austrian economics, a school of economics that stands in direct opposition to Keynesian economics and the currently fashionable penchant for government manipulation of the money supply.

If all that sounds overly academic, consider that the Austrians argue that it was the easy-money policies of the Keynesians running our Federal Reserve that contributed to the housing bubble and the ensuing financial crash and Great Recession.

To paint in very broad brushstrokes, the Keynesians argue that governments should print money pretty freely and look for all manner of ways to artificially encourage consumer spending, with the idea that consumption spurs economic growth. Austrians argue that such policies tend to discourage investment and production over the long-term and lead to wasteful boom and bust cycles. They also argue that artificially low interest rates tend to benefit the rich and well-connected while the resulting inflation caused by all the easy money hurts the poor and middle class.

What does John Nash and game theory have to do with Austrian economics? The relationship is complex at one level and straightforward at another. First the complex part, though summarized as simply as possible.

Danish organization theorist Nicolai Foss concedes that “some aspects of game theory don’t square easily with Austrian economics,” since Austrian economists (who are not all Austrian, by the way) studiously avoid the mathematical reductionism and idolatry that distorts so much of modern economics. But he says this allergy to econometrics has the downside of preventing many of them from appreciating what is potentially valuable in game theory. “Austrians have neglected game theory at their peril,” he writes, and “game theoretic reasoning could be one way of modelling key Austrian insights.”

The case he goes on to build for that assertion makes for a cogent and stimulating paper, but it leaves largely unexamined a deeper and more direct connection between game theory and Austrian economics. I was unaware of the connection until my recent foray into Nash’s life and work.

In an issue of The Quarterly Journal of Austrian Economics, Yvan Kelly shows how Austrian economists influenced game theory at two decisive stages of its development. Kelly begins by tracing the link between early Austrian economist Ludwig von Mises and early game theorists. Here Kelly suggests that “early game theorists were trained by Austrians who thus influenced the field from its beginning.” She then takes it a step further. “The connection most commonly known is the influence Mises had on Oskar Morgenstern; however, this paper reveals a previously unknown connection between Misses, Bert, Hozelitz and Nash.”

In a nutshell, she points out that Nash’s one economics course was taught by the Austrian economist Bert Hoselitz, a former student of Mises. This raises the possibility that Austrian thought was a significant influence on Nash’s game theory work, a possibility Nash himself gives credence to:

By coincidence the person who taught the course was someone that came from Austria. … Austrian economics is like a different school than typical American or British. So by coincidence I was influenced by an Austrian economist, which may have been a very good influence. (Nobleprize.org 2004)

Kelly concludes modestly: “The link between Mises and Morgenstern and between Mises through Hoselitz to Nash is one that future research could examine more closely to determine the depth of influence.”

By way of encouragement for such research, consider a paragraph from an article summarizing a speech Nash gave in 2011. The passage doesn’t spell out the link between Nash’s most famous mathematical breakthrough and any particular aspect of Austrian economics, but it does demonstrate his ongoing preoccupation with Austrian themes:

The subject of Dr. Nash’s lecture was “Ideal Money and the Motivation of Savings and Thrift.” He spoke about recent economic crises, including the national debt of Greece and the “panic of 2008” in the United States. Dr. Nash said that these issues are related to decades-old Keynesian economists’ policies that “have sold to the public a ‘quasi-doctrine’ which teaches, in effect, that … ‘bad money is better than good money.’”

As for Hollywood’s portrayal of Nash,  psychiatrist Jeffrey Satinover argues they have gotten more than just the details wrong:

Let me try, surely in vain, to set the record straight as there are so many subtle but horrifying myths that the Left has created about Nash to suit their purposes. (1) His name has entered science largely through his theory of balance in conflict — the Nash Equilibrium. The first movie to get this wrong had him as a reclusive professor whose computer, Joshua, arrived at the conclusion, “Don’t Play” to avert nuclear armageddon. In fact a stable Nash Equilibrium that averts a nuclear holocaust is attained via Mutually Assured Destruction — peace through strength. This idea was previously lampooned by the Hollywood Left’s caricature of Nash’s mentor, John von Neumann, the mad man with the autonomous glove in How I Learned to Love the Bomb.

Satinover further insists that “Nash almost certainly did NOT have ‘paranoid schizophrenia’ as he remained productive until the end. He almost certainly had bipolar disorder, a condition that may yield transient psychotic episodes.”

That’s also of especial interest to me since my mother has battled with bipolar disorder since she was a young woman. “I know many brilliant scientists with this condition,” Satinover writes. “He may have been diagnosed with schizophrenia upon his initial admission to Maclean Hospital, but that would have been before Harrison and Pope, at Maclean, in 1984, later reviewed all the previous records and discovered that 50% of such “schizophrenia” diagnoses were in error and were actually manic-depression (bipolar).”

What about the evidence of psychotic episodes? “During his manic/psychotic episodes, Nash would become paranoid (this happens in mania) and would then begin spouting crazed LEFTWING fantasies,” Satinover writes. “When he was normal, he was politically conservative. The movie A Beautiful Mind deliberately reversed this because of its obvious implications.”

What are the implications Satinover is referring to? Undoubtedly that Nash’s work undercuts at least two of the left’s most cherished beliefs: the conviction that the nuclear arms race was pointless and wicked for the United States to pursue, and that big government manipulation of the economy in pursuit of enhanced consumption is the path to prosperity. The beautiful mind who died Saturday knew better.